Arch Manning already favored to be No. 1 overall draft pick 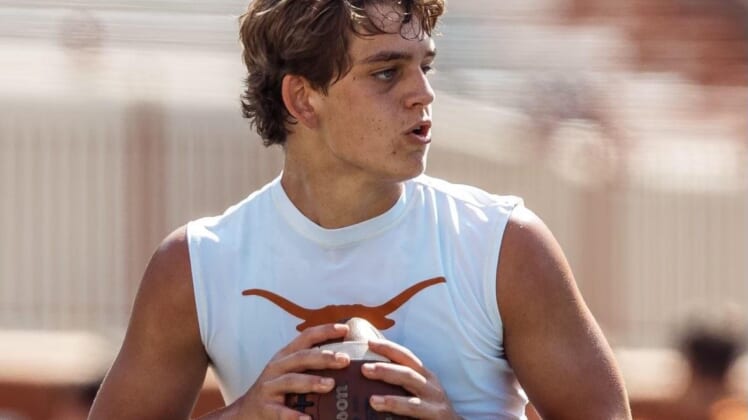 Arch Manning won’t step on the field for the University of Texas until 2023 but he’s already the favorite to be the No. 1 overall pick in the NFL Draft four years from now.

SportsBetting.ag has opened a trio of prop bets around Manning since the consensus No. 1 prospect in the Class of 2023 committed to the Longhorns last week.

The potential action begins with the five-star prospect being offered at +450 to forgo a redshirt season and -190 to start immediately as a true freshman.

Manning chose Texas over a host of powerhouse programs including Alabama, Georgia, LSU and Clemson. The expectation is that the 6-foot-4 New Orleans native will be given an immediate opportunity to take the reins of the Longhorns’ offense.

Manning is the nephew of former NFL greats Peyton and Eli Manning and the grandson of Archie Manning. He is the son of Cooper Manning.

Arch Manning threw for 26 touchdowns and ran for seven more as a junior at Isidore Newman High School. He could be the starting quarterback for Texas in 2025, which would be his junior season and the year the Longhorns enter the SEC.

Seven players have committed to the program since Manning’s announcement, including five on Sunday alone. Five-star defensive back Derek Williams added his commitment on Monday.

“That kind of shocked me,” Williams told ESPN of Manning’s decision. “I knew (Manning) was (likely) going there, but I was just making sure. That impacted my decision going (to Texas).”

Texas has vaulted from the mid-30s to the No. 3-ranked recruiting class for 2023 by 247Sports in the past week.

“This has been a great run,” Sarkisian said Monday, per ESPN. “Hopefully it’s not over. I don’t think it is.

“We may have a few more to go here this week. Hopefully we can continue to capture some of the momentum that has been created.”

Committed to the University of Texas. #HookEm pic.twitter.com/jHYbjBaF5K