Anthony Davis out for Los Angeles Lakers in Game 5 vs. Phoenix Suns

Sportsnaut
May 30, 2021; Los Angeles, California, USA; Los Angeles Lakers forward Anthony Davis (3) passes the ball against Phoenix Suns guard Chris Paul (3) and guard Devin Booker (1) during the first half in game four of the first round of the 2021 NBA Playoffs. at Staples Center. Mandatory Credit: Gary A. Vasquez-USA TODAY Sports

The Los Angeles Lakers ruled out forward Anthony Davis for Game 5 of their first-round playoff series against the Phoenix Suns on Tuesday.

Davis suffered a groin strain in the second quarter of Game 4 Sunday. He has averaged 21.8 points and 8.0 rebounds in the series. The seventh-seeded Lakers are tied with the second-seeded Suns 2-2 through the first four games. 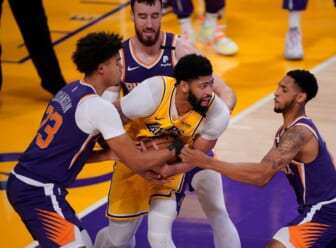 Morris, who spent his first four-plus NBA seasons in Phoenix, has seen action in two games of this series. He has scored just three points, all from the free-throw line, in 12 minutes of action.

The Lakers will start guard Kentavious Caldwell-Pope, who missed Game 4 with knee soreness.