Angels aim to bounce back from opening loss to Royals 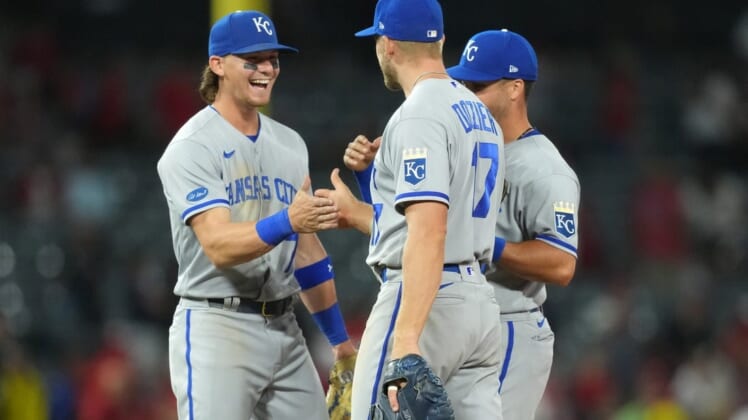 Kansas City shortstop Bobby Witt Jr. is producing mixed results at the plate, but the Royals aren’t concerned about the rookie’s performance.

Witt went 0-for-5 on Monday in the Royals’ 6-2 win over the host Los Angeles Angels in the opener of a three-game series. The teams will square off again on Tuesday in Anaheim, Calif.

Witt, who turned 22 last week, is making his way around major league ballparks for the first time. His eight homers rank second on the team to Salvador Perez’s 11, and he is tied for the American League lead with four triples. However, Witt is batting just .236, and his .279 on-base percentage is among the league’s worst.

More important than the numbers to the Royals, however, is Witt’s development. And Kansas City manager Mike Matheny said he likes what he sees.

“There are so many guys in the league he hasn’t seen,” Matheny said. “It’s going to be the first look. But every time he does, you can tell he’s keeping a really good notebook of where these guys are wanting to go or where they think they can get him out and try to be ahead of it.

“He’s not a one-trick pony. He can hit just about everything, as long as he keeps himself in the zone.”

Witt said the key for him is to look fastball and adjust from there.

Right-hander Jonathan Heasley (1-3, 3.72 ERA) will make his eighth start of the season for the Royals on Tuesday. He has never faced the Angels. In his most recent outing, Heasley gave up two runs on five hits in four innings during a no-decision against the San Francisco Giants on Wednesday.

Detmers lost to the Los Angeles Dodgers on Wednesday when he yielded four runs on four hits in 3 2/3 innings. He will oppose Kansas City for the first time.

The Angels continue to adjust to the loss of third baseman Anthony Rendon, who is due to undergo season-ending right wrist surgery this week. Matt Duffy, who went 0-for-4 while manning third base on Monday, is expected to get most of the starts unless someone emerges.

One possibility is David MacKinnon, who was called up on Saturday. MacKinnon played almost exclusively at first base in the minors, but he spent some time at third base while at the University of Hartford. He hit .327 with 13 homers and 41 RBIs in 56 games for Triple-A Salt Lake this year.

“We’ve got a few different options,” interim manager Phil Nevin said of filling Rendon’s position. “We certainly have guys who can go over there and play well defensively. But when you take Anthony Rendon out of the lineup, the way he works pitchers and takes at-bats, just that name in the lineup, it’s different. I’m not going to lie to you. But with where he’s at, he just couldn’t go, so we’ll piece it together every day.”

Luis Rengifo and Tyler Wade are utility players who could fill in, and infielder David Fletcher, who is recovering from hip surgery but might return next month, is a longer-range option.

The Royals have four wins in their past five outings after the Monday victory, a result that snapped the Angels’ three-game winning streak.

Angels slugger Mike Trout, who hit five homers in the five-game series at Seattle that ended Sunday, was limited to a single in four at-bats in the opener against Kansas City.