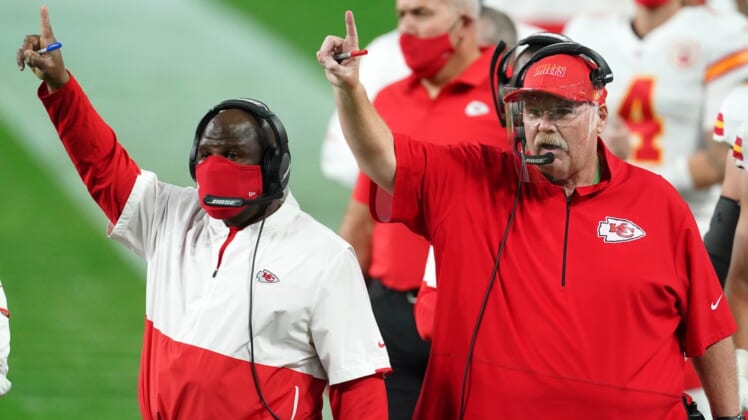 Deshaun Watson isn’t the only person who is disappointed not to see Kansas City Chiefs offensive coordinator Eric Bieniemy land a head-coaching job.

Chiefs head coach Andy Reid said that while the idea of having Bieniemy remain on his staff is great for his team, Reid was “really hoping (Bieniemy) would have an opportunity to take one of these jobs.

“You guys know what I think of him. I think he’s great. I think he would be great for any number of teams that opened up and help them win football games and also develop men into men. I just think he’s a great person.”

Watson, the Houston Texans’ star quarterback, reportedly had been lobbying for Bieniemy to take over in Houston, a job that ultimately went to another first-time head coach: David Culley, who previously served as an assistant to Reid.

Bieniemy, who played nine years in the NFL as a running back, is in his eighth season working for Reid and has been brought in for interviews for several head-coaching vacancies in the past few years. Six of those interviews occurred this year, according to ESPN.

The Chiefs will aim for a second consecutive Super Bowl title on Feb. 7 when they face the Tampa Bay Buccaneers in Tampa.

Bieniemy was hired in 2013 as the Chiefs’ running backs coach, and after five seasons, he was promoted of offensive coordinator.

“I’m not a GM or anything, but I will say coach Bieniemy has helped me out a lot (as) a man, player, just everything I’ve become for the Chiefs’ organization. It’s very shocking that he didn’t get a job,” Hill said.

“I know deep down inside he’s going to look at himself in the mirror and say, ‘What do I have to do better next year or whenever the case may be?’ He’s that kind of dude. He wants to get better and he wants to become a head coach. His time will come,” Hill added.

The Chiefs coasted to the AFC West title at 14-2 this season. They led the NFL with 5,005 yards passing, and they finished fifth with an average of 29.6 points per game.

Not that Reid wasn’t glad to see Culley, his wide receivers coach with the Philadelphia Eagles from 1999-2012 and in Kansas City from 2013-2016, get an opportunity.

“David will do a good job,” Reid said. “He’s a people person. He’ll bring energy to the building. One of the most loyal guys I’ve ever been around. He’s a great person. We were together 18 years. We had a few cheeseburgers together.”