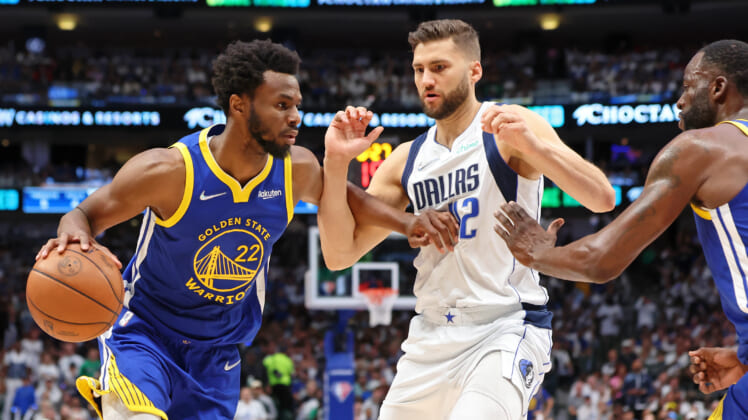 When the Golden State Warriors traded D’Angelo Russell to the Minnesota Timberwolves for a package centering round Andrew Wiggins back in February of 2020, there was one overriding belief.

Wiggins would not be long in the Bay Area. Minnesota attached a first and second-round pick in the trade. Golden State was a mere 12-40 at the time of the trade and had a roster depleted by injury. In the end, Wiggins played a mere 12 games for Golden State that season before COVID-19 suspended the campaign.

Fast forward more than two years, and the former No. 1 overall pick is a key cog for a Warriors team that just clinched a trip to the NBA Finals for the sixth time in eight seasons.

The backdrop here are continued rumors that Golden State will likely have to trade Wiggins this summer for financial reasons. While that could still be the case, these Warriors are sold on what Wiggins brings to the table. In fact, they were sold on him immediately after the deal for Wiggins in February of 2020.

According to ESPN’s Zach Lowe, Golden State’s brass promised Wiggins that he would not be flipped for other assets. Per the report, the Warriors liked Wiggins as a player. They didn’t simply acquire him for his contract.

The Warriors’ ownership group, led by Joe Lacob and Peter Guber, continue to pay a ton into the NBA’s luxury tax. That included a whopping $147 million for the 2020-21 season. For his part, Wiggins has one more season remaining on his current deal.

At some point, this ownership group is going to have to cut ends somewhere. Looking to win their fourth NBA title of the Steve Kerr era, we’re talking about the most-expensive roster in the entire Association. Just look at these cap hits in 2022-23.

That’s $147-plus million committed to just four players. Golden State will also have to think long and hard about signing star young point guard Jordan Poole to an extension this summer.

Poole, 22, has played himself into a lucrative long-term contract that should come out to roughly $25 million annually. If Golden State waits on this, it will then have to contend with other teams as Poole hits restricted free agency in the summer of 2023. Given his ascension to stardom, that would be a much more expensive proposition.

It doesn’t take a genius to realize Wiggins’ importance to the Warriors. Just ask Dallas Mavericks star guard Luka Doncic. The three-and-D wing did a great job defending Doncic in the Western Conference Finals, helping hold one of the game’s top offensive players to 42% shooting while forcing nearly four turnovers per game.

At issue here is Golden State’s roster construction. The team has a stud young forward in Jonathan Kuminga who joined the likes of Kobe Bryant in some elite company as a teenager in this year’s NBA Playoffs.

While only 19, Kuminga could very well be close to starting for the Warriors. Even if he isn’t, a three-guard lineup consisting of Curry, Thompson and Poole would have to be in the cards if the Warriors are to sign the latter to a lucrative extension this summer.

Related: Andrew Wiggins and top-10 players of the 2022 NBA Finals

See the point? While Wiggins has made himself a career in San Francisco after some struggles with the Minnesota Timberwolves, there’s no guarantee he’ll be back next season. It’s the economics of the NBA. And regardless of how the Warriors’ NBA Finals matchup against the Boston Celtics goes, we’re going to hear rumors about this during the summer.