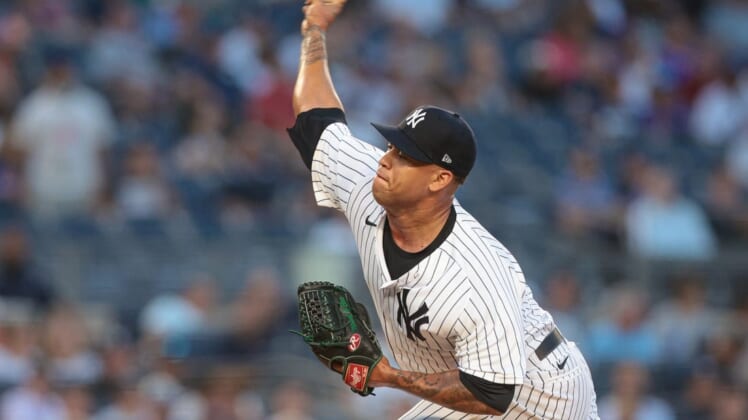 Andrew Benintendi hit a tiebreaking RBI single with one out in the seventh inning, Wandy Peralta retired Francisco Lindor with the bases loaded in the ninth and the host New York Yankees hung on for a 4-2 victory over New York Mets Tuesday night to earn a season split of the Subway Series.

With runners at first and third after pinch hitter Jose Trevino’s single fell just fair in right field as Mets first baseman Pete Alonso tried to make the catch, Benintendi poked an 0-1 sinker off Joely Rodriguez (0-3) into left field after trying to bunt on the previous pitch.

Benintendi’s hit came after he accounted for three runs in Monday’s 4-2 win and hit the tiebreaking two-run homer Sunday to beat Toronto.

Aaron Judge hit his major league-leading 48th homer in the fourth and a run-scoring single later in the seventh off former Yankee Adam Ottavino. Rookie Oswaldo Cabrera drew a walk in the fourth inning for his first career RBI and also got his first outfield assist.

Starling Marte hit an RBI single but the Mets only got one run on his hit in the fifth when Cabrera made a perfect throw from right to nab Brett Baty. Jeff McNeil hit an RBI double in the sixth as Alonso scored after stumbling around third when Yankees second baseman Gleyber Torres did not throw home.

Frankie Montas had his best start for the Yankees, allowing two runs on six hits in 5 2/3 innings after a lengthy opening inning. Montas struck out six and walked one.

Clarke Schmidt (5-2) followed Montas with three innings. Schmidt was one strike away from ending the game but walked pinch hitter Tyler Naquin, allowed a single to Brandon Nimmo and walked Marte.

Peralta got ahead 0-2 and Lindor fouled off consecutive pitches. Peralta ended the tense at-bat by getting Lindor to fly out and earned his second save.