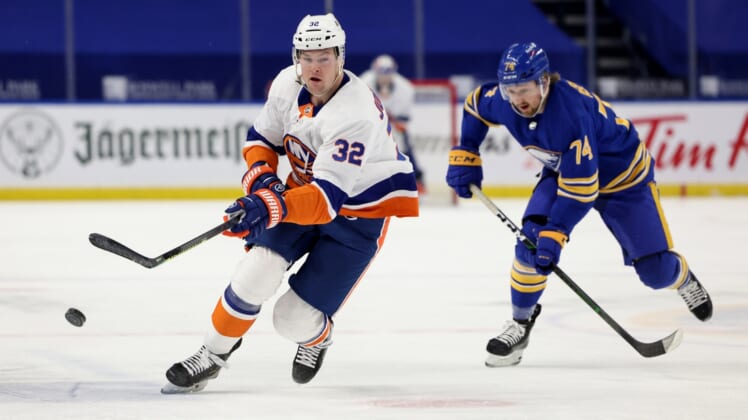 Anders Bjork scored twice in regulation as well as the lone goal of the shootout, while Michael Houser stopped 45 shots as the Buffalo Sabres rallied for a 4-3 victory over the visiting New York Islanders on Tuesday.

Houser opened his NHL career with his second win in two nights.

Trailing 3-2, Bjork beat Islanders rookie goalie Ilya Sorokin (28 saves) on his short side, under the glove with 9:04 left in regulation to level the contest. It was the first multi-goal game of the season for Bjork, who beat Sorokin up high in the shootout.

The 28-year-old Houser, who made 34 saves in Buffalo’s comeback 4-2 win over New York on Monday in his NHL debut, kept the Sabres in this contest once again. His second straight strong effort helped Buffalo post consecutive victories for the first time since April 3 and 6.

Cal Clutterbuck had a goal and an assist for the Islanders, who had won the first six meetings this season with the Sabres prior to Monday.

Buffalo (15-32-7, 37 points) opened the scoring when Cody Eakin flipped in a perfect cross-slot pass from Jeff Skinner with 4:01 left in the first period. However, the Islanders tied it 26 seconds later when Anthony Beauvillier scored.

New York (31-16-6, 68 points) took a 2-1 lead 3:44 into the second when Ryan Pulock’s quick shot from the point went over the shoulder of Houser. Clutterbuck pushed the Islanders’ advantage to two goals when he scored on a shorthanded-breakaway with 10:44 to go in the middle frame.

Buffalo pulled within a goal with 2:23 left in the second after Bjork positioned himself perfectly to deflect in Colin Miller’s shot.

New York’s Mathew Barzal, the team-leader with 41 points, was out of the lineup for the first time since 2017-18. That’s a span of 284 consecutive regular-season games, according to the Islanders, who have clinched a playoff spot and had been planning to rest players over these final days of the season.