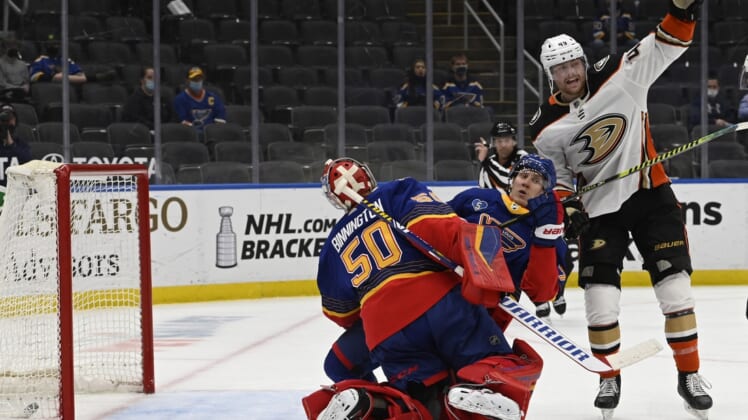 Anthony Stolarz made 24 saves and stopped all three shots in the shootout as the visiting Anaheim Ducks defeated the St. Louis Blues 3-2 on Wednesday night.

Max Jones and Haydn Fleury scored in regulation, and Troy Terry scored the lone goal of the shootout for the Ducks (17-30-7, 41 points).

Mike Hoffman and Kyle Clifford scored, and Jordan Binnington made 33 saves for the Blues (24-19-8, 56 points), who missed a chance to clinch fourth place in the West Division.

Terry brought the puck along the goal line and passed to Fleury above the left circle. Fleury hit the net with his second goal since he was traded to the Ducks from the Carolina Hurricanes on April 12. It was his third goal of the season.

Clifford tied the score 2-2 at 5:29. Ivan Barbashev had the puck along the wall and he waited for Clifford to come through the slot before centering a pass that Clifford redirected into the net for his fourth goal of the season.

Jones was in the penalty box for misconduct against Jake Walman when Ryan O’Reilly made a pass from off the wall just inside the Anaheim blue line to Hoffman, who was wide open at the top of the right circle.

Hoffman fired a slap shot past Stolarz for his 17th goal of the season.

The Ducks drew even in the second period.

Cam Fowler had the puck in the right circle and passed to Sam Carrick at the top of the left circle. His shot glanced off a St. Louis defender and went to Jones near the far post, and he slapped the puck in the net at 12:57 of the period.

Jones has two goals and three assists in the past five games against the Blues this season.