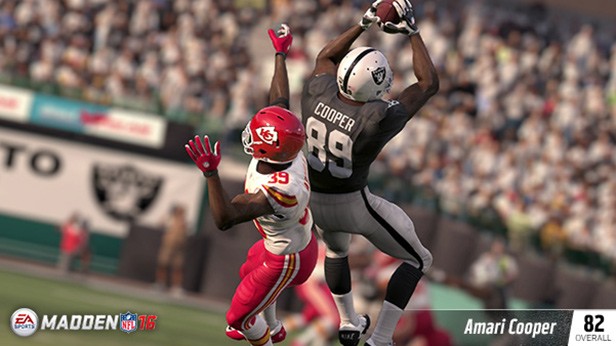 There’s every reason to expect Oakland Raiders rookie wide receiver Amari Cooper to put up the best statistical season of any first-year player in the NFL. Seen as a potential No. 1 receiver for second-year quarterback Derek Carr, the Alabama product is going to hear his number called early and often during the 2015 campaign.

So it shouldn’t be considered too much of a surprise that Cooper came in as the top-ranked rookie for Madden 16.

Per the EA Sports ranking:

“Cooper should be a primary receiver from day one and a favorite target of second-year QB Derek Carr. In addition to his rookie-best 82 OVR, he brings 92 Speed, 94 Agility, and 87 Catching (second only to Kevin White among rookies).”

Cooper was also asked to respond to his ranking:

It will be interesting to see where these rankings are at heading into the actual 2016 season. Something tells me that Cooper will be near the top once again.