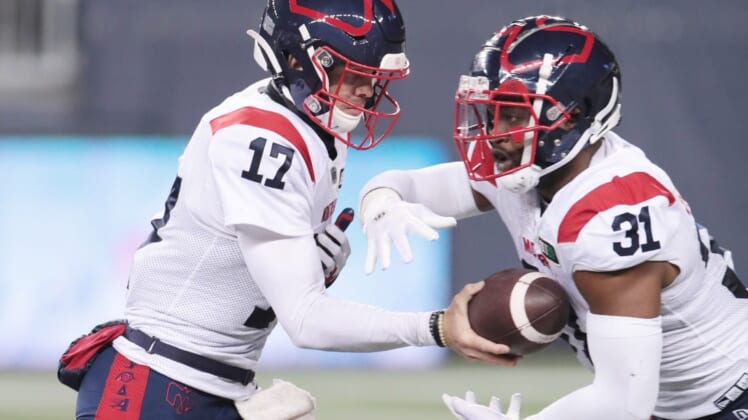 The Montreal Alouettes will be without star running back William Stanback when they visit the Toronto Argonauts Thursday night.

Stanback suffered a fractured ankle in the second quarter last Thursday when the Alouettes lost their season-opener to the host Calgary Stampeders.

The injury required surgery and although Stanback could return at some time during the season, it is a big setback for the Alouettes’ offense.

Stanback led the CFL in rushing last season with 1,176 yards — his second consecutive 1,000-yard season — and was the East Division finalist as most outstanding player.

“Of course we want Stanback in there,” Alouettes coach Khari Jones said. “But we have a lot of confidence in this group. We have two receivers (Eugene Lewis and Jake Wieneke) that caught more touchdowns than anyone in this league. Solid quarterbacks. That’s why it’s called a team. Everyone has to step in and do their part.”

Stanback had three carries for 11 yards and two catches for 17 yards with a touchdown before his injury.

Jeshrun Antwi will take Stanback’s place on Thursday. Antwi rushed for 98 yards on seven carries in the 30-27 loss to Calgary.

While this is the Alouettes second game of the season, the Argonauts will be playing their first game.

The Argonauts feel that the Alouettes will try to establish their running game on Thursday. Montreal quarterback Vernon Adams Jr. can make plays with his arm and legs.

“They’re probably still going to pound the rock,” Argonauts coach Ryan Dinwiddie said. “We have to keep (Adams) in the pocket and establish the line of scrimmage.”

Dinwiddie missed practice early in the week because he was in isolation after testing positive for COVID-19, but the second-year coach returned in time to be on the sideline on Thursday.

McLeod Bethel-Thompson will open the season as the Argonauts quarterback.

Among the key additions to the Argonauts is running back Andrew Harris, who was signed away from the Grey Cup champion Winnipeg Blue Bombers.

Montreal also will be without defensive back Greg Reid (knee) and return specialist Mario Alford (abdomen) against the Argonauts.

Argonauts receivers Eric Rogers (hamstring) and Juwan Brescacin (hip) will be out.