When the San Francisco 49ers hosted the Seattle Seahawks in the season opener back in 2011, expectations were muted. This was a team that had not finished over .500 in eight seasons and was being led by a first-year head coach who didn’t even have a full offseason to implement his scheme due to the labor issues surrounding the NFL.

That very first game came at home against a Seahawks club, led by Pete Carroll, that was much different than the one San Francisco is going to see on Thanksgiving. While they had just come off a playoff appearance, the Seahawks had finished under .500 the previous season and was running with Tarvaris Jackson at quarterback.

A ton of questions remained for San Francisco and Seattle heading into that regular season opener, both of whom were considered possible division champs in a weak NFC West.

Courtesy of NFL.com: Things were different, but in the some way the same, the first time Harbaugh led San Francisco against the Seahawks.

San Francisco went on to win Jim Harbaugh’s head-coaching debut by the score of 33-17 after Ted Ginn Jr returned a kickoff and punt return for touchdowns in the final 4:08 of the matchup.

This was the start of a season that saw the 49ers go 13-3 and make a surprise trip to the NFC Championship game. San Francisco’s offense ranked 11th in the NFL in scoring, but finished 26th in total yards. Defensively, Vic Fangio’s unit ranked second in points allowed (14.3 per game) and fourth in total yards.

Knowing full well the limitations of quarterback Alex Smith and the 49ers passing game, Harbaugh focused on pounding the rock with Frank Gore and forcing turnovers on defense. In fact, the team’s leading receiver was Michael Crabtree at under 900 yards for the season.

Courtesy of SB Nation: When the 49ers switched to Kaepernick, the offense seemed ready to take off.

For Harbaugh and the 49ers, that season represented what was meant to be a building block for years to come. The following year saw the team replace Alex Smith in the starting lineup with Colin Kaepernick, who then proceeded to lead San Francisco to its first Super Bowl appearance since 1994.

Everything seemed to be clicking on both sides of the ball.

And with the addition of Anquan Boldin just months after losing to his Baltimore Ravens in the Super Bowl, San Francisco had provided Kaepernick with a receiving weapon that neither he or Alex Smith had in previous seasons under Harbaugh.

Then something funny happened.

The 49ers offense started to struggle big time. Kaepernick wasn’t progressing at the level many figured he would, and offensive coordinator Greg Roman struggled big time with play calling.

Though, this time the struggles were different. San Francisco had the weapons to succeed on offense, but something just didn’t seem to be clicking. Even then, Harbaugh was able to lead the 49ers to the NFC Championship game where they lost after a last-second Kaepernick interception against the Seattle Seahawks.

Everything seemed to be in place for this unit to start holding up its end of the bargain.

And now, nearly four years after Harbaugh was hired and three years following his initial success as the teams’ head coach, they are right back to square one. 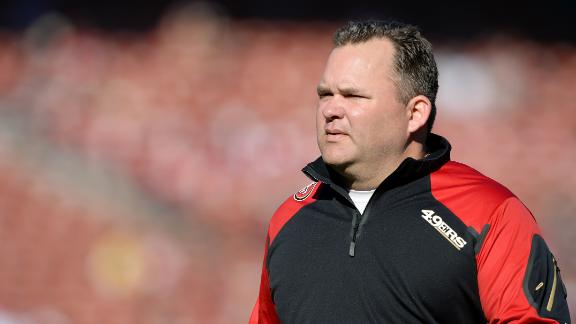 Courtesy of ABC News: It appears that the well is running dry with Greg Roman at coordinator.

San Francisco’s offense simply can’t move the ball, the play calling has been atrocious, and no one on the team seems to have a real answer.

Despite winning six of their last eight games, the 49ers find themselves embroiled in a push for the final playoff spot in the NFC and will have to take on the Seattle Seahawks on Thanksgiving night in what amounts to a must-win for the team. They do so after two consecutive horrible performances on the offensive side of the ball. And they do so with a defense that ranks second in the NFL in yards allowed and in the top 10 in scoring. They do so with multiple starters out of the lineup on the defensive side of the ball, including All Pro linebackers NaVorro Bowman and Patrick Willis.

Four years later, it’s nearly the same story with nearly the same exact questions. Can San Francisco’s offense do enough to make the team a Super Bowl contender? Can its defense continue to dominate opposing offenses enough for the team to win ugly on a consistent basis? And if not, do the 49ers have enough offense to pick up the slack for a defense that simply might not be able to dominate against better opponents?

Courtesy of SF Examiner: Without Bowman and Willis, can the 49ers expect this defense to continue dominating?

With some many questions, come very few answers.

For his part, Kaepernick isn’t playing bad football. He’s completing nearly 62 percent of his passes and has thrown 15 touchdowns compared to six interceptions. If these numbers sound familiar, they should. Alex Smith put up nearly the exact same numbers in 2011, albeit over the course of a 16-game season.

Future Hall of Famer (in my mind) Frank Gore ranks in the top 10 of the NFL in rushing, but the wear and tear is obviously showing late in games. In each of the 49ers last three wins, Carlos Hyde has seen more late-game rush attempts than Gore. While this might very well be a sign that the 49ers are preparing for the future, it could also be due to the fact that Roman and Co. have been completely inept at calling plays throughout the course of the year.

And that’s the crux of the matter here. The 2011 San Francisco 49ers had excuses for being less-than-average on the offensive side of the ball. They possessed a quarterback in Smith who had major limitations when it came to pushing the ball down the field. Its top two receivers were Michael Crabtree and Josh Morgan. And in reality, there was really nothing past that.

This season is much different. Joining Kaepernick, Gore and Hyde on offense are a ton of special skill-position players. Anquan Boldin is still playing at an elite level at wide receiver, while both Brandon Lloyd and Stevie Johnson have shown flashes. On the other hand, Vernon Davis is having one of the worst seasons of his career. Though, it must be noted that with all the other weapons San Francisco boasts, Davis’ lack of production shouldn’t be the issue.

So how do the 49ers get out of this rut on offense? That’s the million-dollar question right now. A question that no one seems to have an answer to. Maybe the team can start to rely on Kaepernick’s legs more than we have seen recently. Maybe they will get back to the basics with Gore and Hyde on the ground. Heck, maybe they will be the latest team to fire a coordinator late in the season. See the 2012 Baltimore Ravens as the most recent example.

Anything to jump start the offense would be seen as a positive in Northern California.

49ers with 10 points at home against the Redskins defense? This offense has been very bad. This is unacceptable.

Either way, the 49ers cannot expect to be taken seriously as contenders unless their offense starts to do its job. After all, a total of 33 points against the New York Giants and Washington Redskins (a combined 6-16 on the season) isn’t going to get it done.

Unfortunately, San Francisco only has a few days to prepare for Richard Sherman and the Legion of Boom. If the ship is not righted, Harbaugh and Co. will be spending a cold Thanksgiving night in Santa Clara thinking about what the future is going to be with the team falling nearly completely out of the NFC Playoff race. In a must-win outing against Seattle, it’s high time the 49ers offense holds up its end of the bargain. If that doesn’t happen, this could very well be a lost season for a team that came into it with Super Bowl aspirations.

You’re under the microscope, Mr. Harbaugh.

Winning ugly against good teams is one thing. Being the best of two bad teams is another thing. Thursday night will be your chance to prove that what you have built over the past four seasons isn’t about to come crashing down on you against an equally hungry Seattle Seahawks team on Thanksgiving night.