Dallas Cowboys running back Alfred Morris isn’t exactly what you would call a “car guy.”

Rather than doling out the big bucks on fancy sports cars, Morris is content driving his 1991 Mazda that he bought for $2 from his pastor when he attended the Florida Atlantic University.

“Yes, I still have my car,” Morris said via Kristi Scales of 5pointsblue.com. “I still drive ‘Bentley’ which is what I call my car even though she’s not really a Bentley. It’s always going to be my baby and I’m going to drive it ‘til she dies.”

Per the report, Morris had his car shipped from D.C. to Dallas in order to make the “captain’s workouts” after he signed on with the Cowboys this past March.

The Bentley comment is in reference to fake licence plate he has in the front of the car. 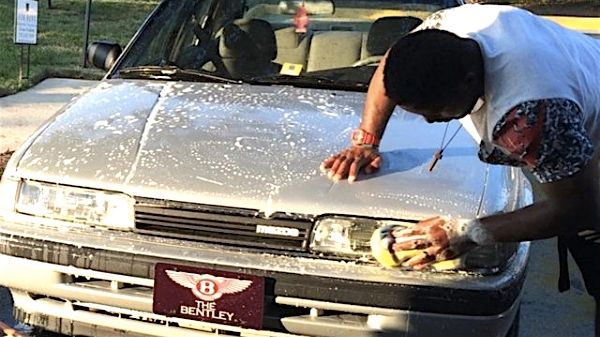 Morris did invest a little in updating some of the car’s antique features though. He swapped out the old AM-FM tape deck with a touch screen stereo and changed the battered cloth seats to leather. Plus he had the air conditioning repaired.

Whether Morris is just being frugal about his money or is simply a sentimental guy, it would appear that this Mazda is here to stay until it can no longer get the job done.

When that happens, we’ll have to see what type of upgrade eventually replaces her.

Though, Morris has proven that he doesn’t necessarily need a car to get around. His bicycle was spotted at the Redskins’ training facility in his designated parking spot last year (more on that here).

Morris, a sixth-round pick back in 2012, had a down season in 2015 — ultimately leading to the Redskins deciding not to retain him. He’s currently listed third on the Cowboys depth chart behind Ezekiel Elliott and Darren McFadden.