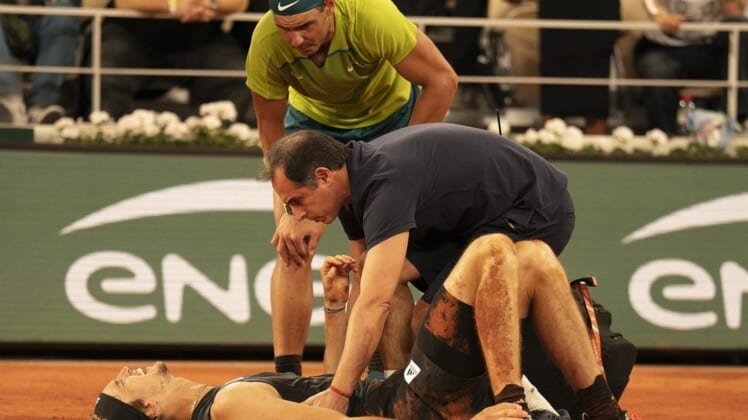 German Alexander Zverev said Saturday that he tore “several lateral ligaments” in his right foot during his match against Rafael Nadal in the semifinals of the French Open in Paris.

Zverev, 25, rolled his ankle late in the second set and was forced to retire versus the Spaniard on Friday.

On Saturday, he provided an update on Instagram after he underwent scans and tests in Paris.

“Hey guys! I am now on my way back home,” he wrote. “Based on the first medical checks, it looks like I have torn several lateral ligaments in my right foot. I will be flying to Germany on Monday to make further examinations and to determine the best and quickest way for me to recover.

“I want to thank everyone all over the world for the kind messages that I have received since yesterday. Your support means a lot to me right now! I will try to keep you updated as much as possible on further developments.”

If Zverev’s assessment of his injury is accurate, he likely will miss Wimbledon despite being included on the entry list on Friday evening. Wimbledon opens June 27.

Zverev and Nadal were already just over three hours into a tense match when the injury occurred.

Nadal won the first set 7-6 (8) and the second set also was headed to a tiebreaker. With Nadal serving at game point at 5-6 in the second, Zverev chased a Nadal shot, moving to his right, and slipped on the clay courts at Roland Garros. He immediately fell to the ground and could be heard crying in agony.

Zverev, the world’s No. 3-ranked player, was taken off the court on a wheelchair. After an examination in the locker room, he returned to the court, with his right shoe off and on crutches. With tears in his eyes, he shook the hand of the chair umpire, embraced Nadal and saluted the crowd that had risen to its feet to give him a standing ovation.

Had Zverev gone on to win the French Open, he would have risen to No. 1 in the world. He is still seeking his first Grand Slam victory.

“I think he started the match playing amazing. I know how much means to him, fight to win his first Grand Slam,” Nadal said Friday.

“We are colleagues, we have been practicing together a lot of times. And see a colleague on the tour like this, even if for me it’s a dream (to) be in the final of Roland Garros, of course that way is not the way that we want it to be. Feels very sorry for, if you are human, you should feel very sorry for a colleague.”

Nadal will meet eighth-seeded Casper Ruud in Sunday’s final after the Norwegian recorded a 3-6, 6-4, 6-2, 6-2 victory over 20th-seeded Marin Cilic of Croatia.

Nadal will be seeking his 14th French Open and 22nd overall Grand Slam title. He has never lost in a final at Roland Garros.