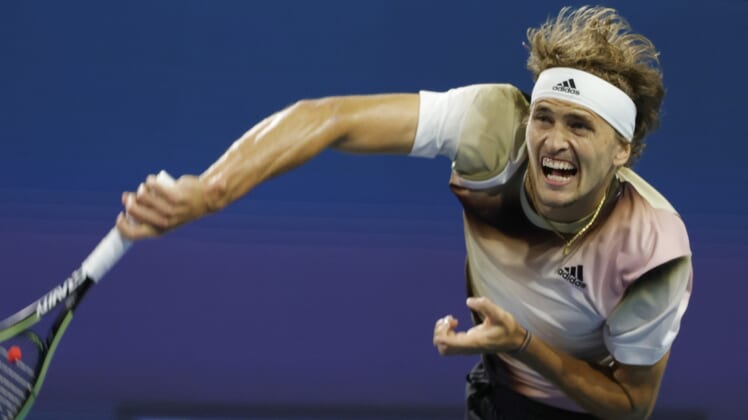 No. 2 seed Alexander Zverev and No. 3 seed Stefanos Tsitsipas will square off in the semifinals of the Monte Carlo Masters in Monaco after each player won his quarterfinal match in three sets on Friday.

The other side of the bracket will feature two unseeded players vying for a trip to the final. Spaniard Alejandro Davidovich Fokina advanced past American 10th seed Taylor Fritz 2-6, 6-4, 6-3, while Bulgaria’s Grigor Dimitrov upset 11th seed Hubert Hurkacz of Poland 6-4, 3-6, 7-6 (2).

Zverev and Sinner broke one another’s serve five times apiece. Neither player led by more than a point during the decisive third-set tiebreaker until Zverev went ahead 6-5 and won on his first match point.

“I’ve lost so many matches (like that) this year,” Zverev, who had 38 winners, said in his post-match interview. “I guess it’s in the back of my mind and I think this one will definitely help.”

Tsitsipas was one game away from a straight-sets victory when he led Schwartzman 5-2 in the second set. Schwartzman fought back and tied the set 5-5, then forced a tiebreaker that he went on to dominate.

But Tsitsipas broke Schwartzman’s serve seven times in 10 opportunities, including all three of his chances in the third set, to pull out a victory. He also held a 34-24 edge in winners.

“I was really close in the second set,” Tsitsipas said. “That was the moment I had a big chance to close it out, but Diego is Diego and I had to be Stefanos in the third set.”

Fritz controlled the first set against his unseeded foe but ultimately ran out of steam. The American lost despite owning a 5-0 edge in aces and saving a whopping 15 of 19 break points. Davidovich Fokina won 42 of 61 first-service points (68.9 percent).

Davidovich Fokina qualified for his first semifinal at an ATP Masters 1000 event. He had 36 winners to Fritz’s 28.

Similarly, the unseeded Dimitrov reached just his second career Masters 1000 semifinal after also doing so at Monte Carlo in 2018. Though Hurkacz out-aced him 11-2, Dimitrov held steady and won a whopping 38 of 46 first-service points (82.6 percent). He also committed just 24 errors while Hurkacz had 37.