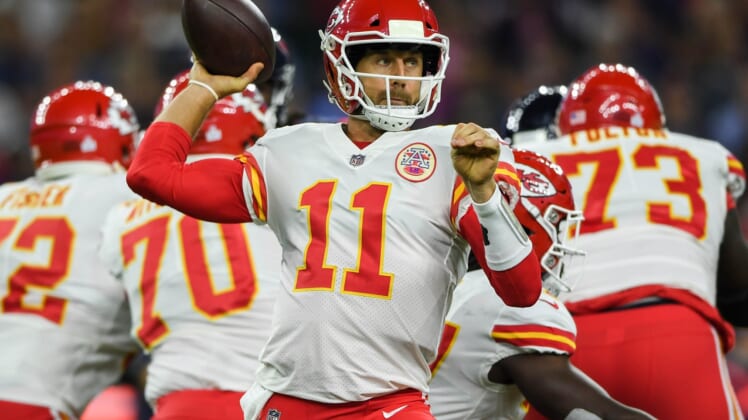 A crazy, albeit realistic, thought came to mind during the Kansas City Chiefs’ 42-34 win over the Houston Texans on Sunday night. What if Alex Smith is the NFL MVP through five weeks? No, we didn’t misspell Aaron Rodgers here. No, Tom Brady didn’t suddenly use his diet to morph into Alex Smith’s body.

A quarterback that has not thrown for more than 3,502 yards or 23 touchdowns in a single season is the real NFL MVP nearly one-third of the way through the season.

It seems to be an impossible thought, but there’s a whole heck of a lot that’s led to this new-found level of success for a quarterback that was jettisoned out of San Francisco in favor of a current free agent quicker than a Deadhead hater.

In his final two seasons with the 49ers, Smith posted a 19-5-1 record before being “benched” in favor of Colin Kaepernick in 2012. That very same span saw the former No. 1 overall pick put up 32 total touchdowns compared to 10 interceptions en route to posting a combined 95.1 passer rating. 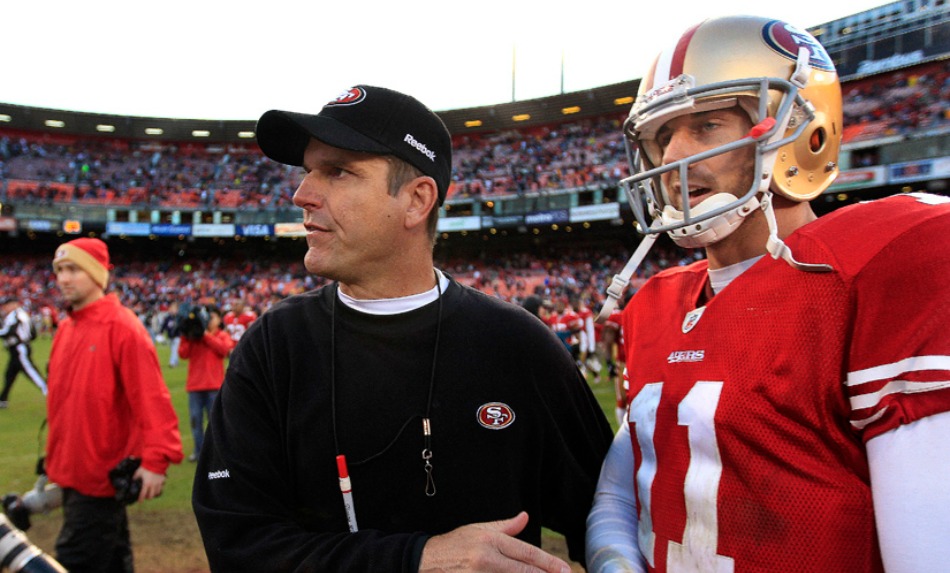 Even then, Smith was shown the pine because he was seen as nothing more than a game manager. Kaepernick was viewed as a generational talent who could transcend the quarterback position for the Super Bowl contenter. At least initially, that’s what he did, leading the 49ers to the Super Bowl after just seven career regular season starts.

As Kap was thrilling fans with amazing touchdown runs and beautiful down-field passes, Smith was riding the bench in hopes of being traded to another team. This happened shortly after the Super Bowl, a deal that sent Smith to the Kansas City Chiefs for two second-round picks. It’s a bounty many believed was too rich for a game manager with limited upside.

Despite leading the Chiefs to a 41-20 record in his first four seasons with the team, they decided it made sense to exhaust a first-round pick in the 2018 NFL Draft to move up for Patrick Mahomes this past April.

For Smith, it was a repeat of what he saw in San Francisco. The writing was on the wall. And Smith knew it.

Smith with once again a stopgap option until a younger, more dynamic quarterback eventually took over.

And looking at Smith’s stats from his first four seasons in Kansas City, it made all the sense in the world from a organizational standpoint. The former No. 1 overall pick averaged just 3,222 passing yards with 19 touchdowns during that span. While he threw a combined 28 interceptions, the game manager label was definitely something that followed him to Kansas City.

Then, in Week 1 against the defending champion New England Patriots, something changed. Something clicked. Smith completely outplayed Tom Brady to the tune of 28-of-35 passing for 368 yards with four touchdowns in a 42-27 win. At Gillette Stadium.

Before you head out #Chiefs fans:
Breaking down Alex Smith’s standout performance versus Patriots#NextGenStatshttps://t.co/3p2C5VpfgR pic.twitter.com/HrcC4VTM5Y

What in the world happened there? Was it a mirage of sorts? Smith would answer that the following week against the Philadelphia Eagles, completing 21-of-28 passes for 251 yards and a score in yet another win.

The tape was telling us something different here. No longer was Smith relying on the check down and intermediate routes. He was actually throwing down field. He was doing so with (wait for it) success. This is something that had not defined the quarterback’s career throughout his first 12 years in the league.

For fans in both San Francisco and Kansas City, it had become maddening to see Smith avoid the potential for mistake down the field to lob three yard passes to running backs and tight ends. Once the calendar turned to 2017, this seemed to be a thing of the past.

While Smith’s Week 3 performance against the Los Angeles Chargers (16-of-21 passing, 155 yards) reminded us that old habits die hard, what the former Ute has done the past two weeks changed this narrative in a big way.

In what was a late-game comeback against the Washington Redskins on Monday Night Football in Week 4, Smith opened up in a big way. He hit Albert Wilson and Travis Kelce for 30-plus yard passes en route to throwing for 293 yards on 27-of-37 passing in a 29-20 win.

Maybe, the new and improved Smith wasn’t simply limited to the first two games of the season. Was it possible that his old habits did in fact die soft?

Well, that was on full display Sunday night against the Houston Texans. Taking advantage of a wide-open playbook, Smith responded by completing 29-of-37 passes for 324 yards and three scores.

Now, heading into Week 6, the veteran is on pace for some absolutely absurd numbers. These numbers include 4,451 passing yards with 38 total touchdowns and zero interceptions. He currently leads the NFL in completion percentage (76.6) and passer rating (125.8). That’s about as perfect as you can get in the NFL.

But there’s more. Taking that game manager label and chucking it down the road faster than a Chiefs fan would a Black Hole enthusiast, Smith also leads the NFL in yards per attempt (8.8) and adjusted yards per attempt (10.2). All the while, Kansas City boasts the league’s top scoring offense at 32.8 points per game and ranks No. 2 in total offfense.

This all seemed to be a foreign thought when the Chiefs inexplicably released No. 1 receiver Jeremy Maclin late in the offseason. Sure Tyreek Hill proved himself to be a dynamic playmaker as a rookie in 2016, but would his 5-foot-10 frame transition well to the primary receiver role?

Through five games, that question seems best reserved for an bygone era in which Smith couldn’t get the ball to his receivers on a consistent basis. Hill has caught 25-of-34 targets for 356 yards and two touchdowns. His 73.5 catch percentage ranks in the top three of the NFL among primary targets. This is yet another example of how Smith has morphed from game manager to actual MVP candidate in less than a calendar year.

There will be some push back to the idea that Smith is the true MVP through five weeks. He boasts a rookie running back in Kareem Hunt who is in the midst of a potentially historical season. Here’s a guy that’s already put up 775 total yards and six scores. Yes, that’s a pace of 2,480 total yards from a running back in today’s NFL.

We also can’t look past what Aaron Rodgers, fresh off another late-game win, has done for the Green Bay Packers. Without as much talent on the other side of the ball, Rodgers has his Packers at 4-1 on the season and in first place in the NFC North. At this rate, he’ll likely be the odds-on MVP favorite should the Packers continue to win.

In no way does this mean Smith shouldn’t be considered The REAL MVP. He’s lost All Pro safety Eric Berry and starting running back Spencer Ware for the season. His No. 1 receiver was released during the summer. He’s currently playing without two starting offensive linemen. Even then, his Chiefs are 5-0 and the best team in the NFL by a country mile.

That’s the definition of a REAL MVP.