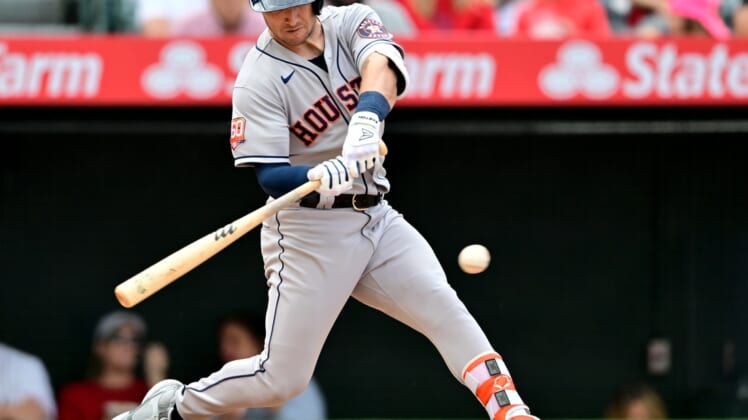 Alex Bregman’s clutch hit and Kyle Tucker’s perfect throw were the differences in the Houston Astros’ 4-1 victory over the Los Angeles Angels on Sunday afternoon in Anaheim, Calif.

The Astros took three of four from the Angels in the season-opening series.

Bregman went 6-for-14 with two homers, six RBIs and four runs scored in the series, and it was his two-out, two-run single in the fifth inning Sunday that put Houston up for good.

Tucker went 0-for-4 Sunday, but his outfield assist in the third inning ended a potential big inning for the Angels and turned the tide of the game. Tucker threw out Tyler Wade trying to score from third on a fly ball by Mike Trout.

Astros closer Ryan Pressley picked up his second save of the season.

Jack Mayfield’s first home run of the season off Urquidy in the second inning gave the Angels an early 1-0 lead, but they missed a chance for more in the third.

Wade bunted for a single with one out and went to third on a double by Shohei Ohtani. The speedy Wade would have scored easily had Ohtani’s drive to right field not bounced into the seats for a ground-run double.

Trout followed with a fly ball to medium-shallow right field for the second out of the inning. Wade tagged and tried to score, but Tucker threw him out at the plate.

The Angels challenged the call but it was upheld, and the inning was over.

Suarez held Houston scoreless through four innings but he was unable to get out of the fifth. With one out, Suarez walked both No. 9 hitter Martin Maldonado and leadoff hitter Jose Siri and was removed from the game in favor of reliever Austin Warren.

Warren struck out Jeremy Pena for the second out of the inning, but with Bregman at the plate, a wild pitch allowed Maldonado and Siri to advance to second and third.

Bregman then singled to center, scoring both baserunners to give the Astros a 2-1 advantage.

The Astros added a couple insurance runs in the eighth inning, Pena scoring the first on a wild pitch from Angels reliever Archie Bradley, and Bregman scoring the second on an infield single by Chas McCormick.