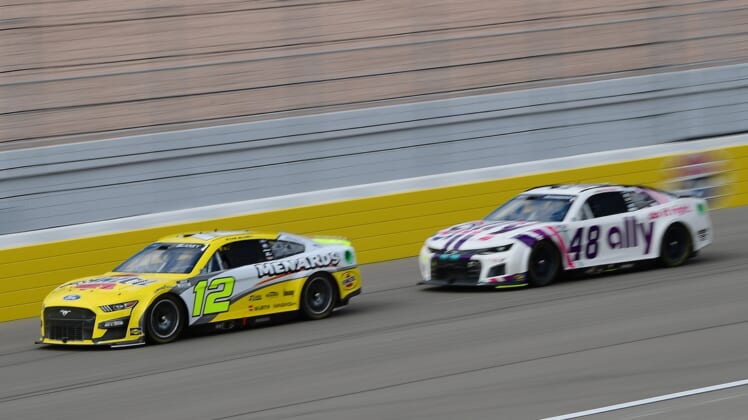 Larson elected the high spot with Bowman underneath. They ran side by side until Bowman kept his Chevrolet down low and claimed his seventh career Cup win at the checkers.

Busch grabbed the lead after pit stops with 50 laps to go but took on four tires in the final stop and restarted fourth.

Christopher Bell started from the pole and led the first 33 laps but fell back in the top 10. He looped his Toyota shortly after the halfway point and came home 10th.

After winning his first career pole Saturday with a speed of 182.673 mph, Bell paced the first 33 circuits around the 1.5-mile track.

After starting shotgun on the field following a Saturday practice crash, Busch was involved in a spin behind Austin Dillon’s sliding No. 3. Busch also fought linkage problems on his shifter in the reserve car, brought out West for parts and unprepared to race.

Bowman and Denny Hamlin took turns at the front, but it was Bowman leading a three-Chevrolet brigade to win the first stage.

In the seventh caution, Keselowski spun by himself and was struck by Blaney, who received significant damage just after the 100-lap mark.

Chastain passed Larson and led Chase Elliott to the line to give his No. 1 team its first-ever stage-points win on Lap 165 to close out the second stage.

With most of the field pitting with 50 laps to go, Hamlin made a shifting mistake and brought out the 11th caution period — eventually turning over the lead to Busch.