10-time All-Star Albert Pujols is already considered one of the greatest players in franchise history. The future first ballot Hall of Famer will go down in the record books in the same chapter as Stan Musial, Rogers Hornsby and Bob Gibson.

Now 42 years old, Pujols just recently signed a one-year contract to return to the Cardinals after last suiting up for the team back in 2001.

In just his second game back as a member of the Cardinals, Pujols excited fans on hand in St. Louis during Tuesday’s game against the in-state rival Kansas City Royals.

In his first at-bat of the game, Albert Pujols took a Daniel Lynch 93 mile-per-hour fastball deep over the left field fence for a solo home run.

This represented Pujols’ first homer in a Cardinals uniform since all the way back on September 22, 2011, against the New York Mets when he took Chris Capuano deep. Yeah, that was eons ago.

Albert Pujols looking to finish historic career with a bang

Tuesday’s homer represented the 680th of Pujols’ legendary career. It’s rather obvious that he wants to reach that 700 home run plateau before calling it quits at the end of the 2022 season.

It’s not yet known whether Pujols will get the plate appearances to make this happen. Paul Goldschmidt remains St. Louis’ every day first baseman while Corey Dickerson has been holding down the fort at DH. 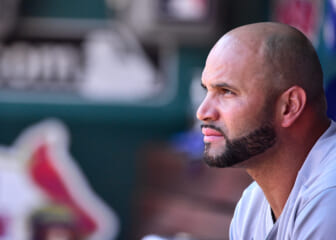 Even then, more of what we saw from Pujols in the first inning of Tuesday’s game could lead to increased playing time.