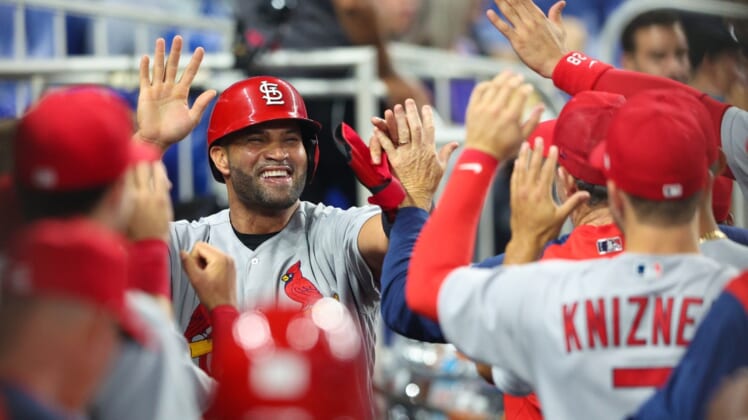 The Cards got scoreless relief pitching from T.J. McFarland (one inning), Ryan Helsley (1 1/3 innings) and Giovanny Gallegos (one inning).

Jesus Luzardo (0-1) took the loss after he struck out just three and allowed seven hits, two walks and five runs (four earned) in 4 1/3 innings. Luzardo had 12 strikeouts in his previous start.

Marlins right fielder Avisail Garcia left the game due to an upset stomach. His replacement, Bryan De La Cruz, homered in his first at-bat, which came in the sixth inning.

It was De La Cruz’s first homer of the year and the sixth of his young career.

St. Louis opened the scoring with two runs in the second inning. Pujols blooped an opposite-field double to right, and Paul DeJong drove him in by drilling a two-out, 3-2 fastball that one-hopped the fence in left for another two-bagger. That pitch was clocked at 98 mph and was low in the zone.

DeJong scored on a throwing error by Marlins second baseman Jazz Chisholm, who had time to throw out slow-footed Yadier Molina at first.

The Cards made it 4-0 in the third. Paul Goldschmidt doubled to the gap in left-center and scored on Tyler O’Neill’s ground-ball single through the shift to left-center. O’Neill was thrown out at second by center fielder Jesus Sanchez. But Pujols singled and scored on Tommy Edman’s triple to right-center.

In the fifth, the Cards knocked out Luzardo, who was charged with his fifth run when reliever Shawn Armstrong — who inherited two runners — allowed Edman’s two-out single.

However, Cardinals relievers retired 10 of the final 12 Marlins batters to end the game.