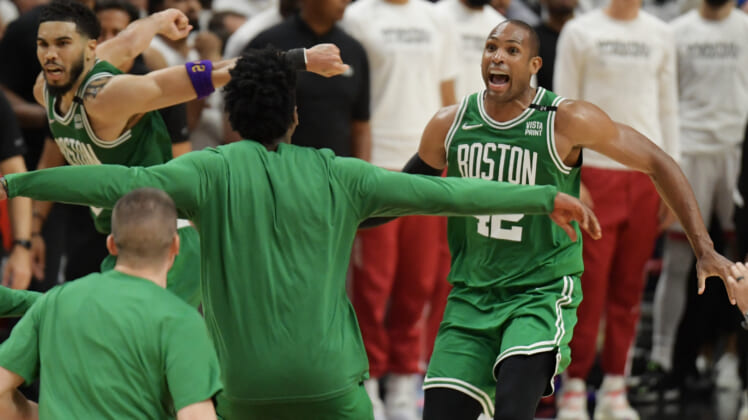 Veteran big man Al Horford has proven to be a valuable presence for the Eastern Conference champion Boston Celtics throughout their playoff run.

Acquired from the Oklahoma City Thunder in June of last year in a deal involving Kemba Walker, most figured Horford was merely a salary throw-in. New front office head Brad Stevens made this move immediately after transitioning from the bench. The idea was for Boston to rid itself of Walker’s bloated contract.

Fast forward a bit less than a calendar year, and it looks like Horford will be a member of the Celtics beyond the upcoming 2022 NBA Finals against the Golden State Warriors.

The 35-year-old center had only $14.5 million of his $26.5 million salary guaranteed for next season prior to Sunday evening. Once Boston took out the Miami Heat in the Eastern Conference Finals, he saw $5 million more of that salary guaranteed.

These incentives were included in the original four-year, $109 million contract the All-Star signed with the Philadelphia 76ers back in July of 2019. If Boston were to defeat Golden State in the NBA Finals, Horford’s entire $26.5 million salary for next season would be guaranteed.

However, it doesn’t look like the veteran will have to wait to decide if he’ll collect that full amount. According to Brian Robb of MassLive, Boston plans on guaranteeing that amount regardless of the outcome of the Finals.

“League sources tell MassLive that the Celtics are expected to bring Horford back and guarantee the full $26.5 million no matter what happens in the NBA Finals after a sensational regular season by the 35-year-old followed up by one of the best postseasons of his career.”

Al Horford contract is not detrimental for the Boston Celtics

It must be noted that Horford will be a free agent following the 2022-23 season. If he struggles to open next season or the Celtics find themselves out of contention (that’s unlikely to happen), the team would then have an expiring contract to offer up other teams. Said deal could prove to be valuable in the form of a trade exception moving forward.

As it currently stands, Horford’s contract will have very little impact on what Boston does during the summer. The team is expected to be north of $19 million over the cap in the first place. Saving $7 million by moving off Horford wouldn’t make much sense. That’s especially true given his performance in his return to the Celtics.

Related: Al Horford and the top-10 players in the 2022 NBA Finals

While Horford struggled to an extent from distance compared to his first stint with Boston (38% from 2016-19), his ability to expand his game during the postseason is one of the reasons why the team came out of the east.

Al Horford is shooting 43% from three-point range through 17 playoff games. He’s going to be a valuable asset in helping Boston connect from distance against a high-scoring Warriors squad starting Game 1 on Thursday.