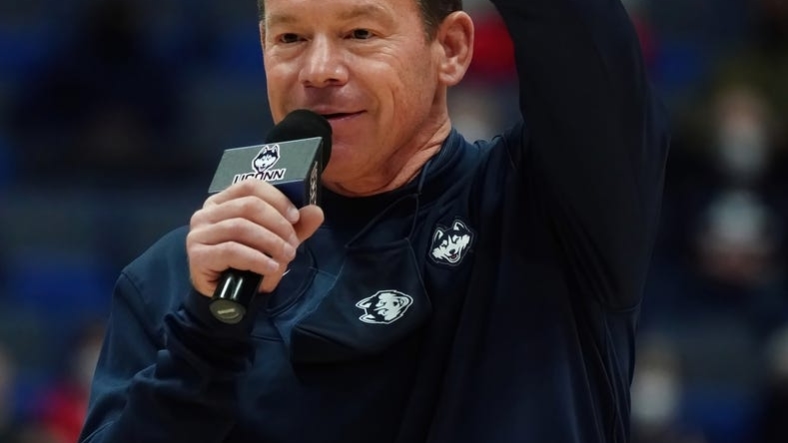 UConn will welcome Central Connecticut State for its home opener Saturday, coming off generally positive reviews from the Huskies’ season opener a week ago.

The reality, though, is that the Huskies fell 31-20 at Utah State, and first-year UConn coach Jim Mora Jr. isn’t about to be satisfied with pats on the back.

“You start accepting ‘good job,’ you’ll never become what we’ve set out to become,” said Mora, whose previous college game as a head coach before last week was in 2017 at UCLA.

The Huskies, who were 1-11 last season, jumped to a 14-0 lead against Utah State but were down 24-14 at halftime and added only a pair of field goals the rest of the way.

When a knee injury sidelined starting quarterback Ta’Quan Roberson early in the game, the Huskies were forced to use true freshman Zion Turner much earlier than expected.

Turner had his first pass intercepted and showed inconsistency, going 12-of-31 passing for 109 yards and a touchdown. With Roberson, a transfer from Penn State, likely out for the season, Turner will get his first collegiate start this week.

“I have high expectations for Zion but probably not near as high as he has for himself,” Mora said. “The kid is a winner. He just has not lost a lot of games in his life.”

The Huskies also lost starting wide receiver Keelan Marion to a broken collarbone. That left much of the load on offense to sophomore running back Nathan Carter, who rushed for 190 yards on 20 carries.

Central Connecticut State also is looking for a bounce-back season. The FBC team finished 4-7 last year after sitting out the 2020 campaign because of COVID-19 concerns. The Blue Devils were 11-2 and won the Northeast Conference title in 2019.

“I think we’ve got a group of guys that are leading from the front, that guys gravitate toward and believe in,” Blue Devils coach Ryan McCarthy said, according to the New Britain (Conn.) Herald.