The bad PR continues for the National Football League and some of its star players. Minnesota Vikings running back Adrian Peterson has apparently been indicted on child abuse charges (via TMZ.com).

Texas law enforcement handing down indictment today on Vikings RB Adrian Peterson on charges of injury to a child. Peterson has been cooperating with law enforcement. He now had to turn himself into custody.

Mark Berman of Fox’s Houston affiliate is reporting that authorities in Montgomery County, Texas, have indicted Peterson for reckless or negligent injury to a child.

We will have more information as it becomes available.

Arrest of Adrian Peterson (reported by @MarkBermanFox26) stems from the disciplining of a son with a switch, source says. He’s been indicted

Houston Police Department have released images stemming from the incident in which Peterson was indicted (via CBS Minnesota). 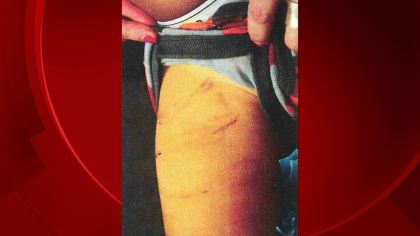 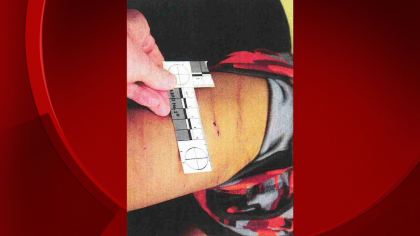 The doctor told investigators that the boy had a number of lacerations on his thighs, along with bruise-like marks on his lower back and buttocks and cuts on his hand.

The police report says the doctor described some of the marks as open wounds and termed it “child abuse.” Another examiner agreed, calling the cuts “extensive.”

The charges stem from an alleged incident between Peterson and his child where it is being reported that Peterson was spanking his child with a switch. A switch spanking is typically that of a spanking where the person uses a thin branch instead of an open hand.

Despite previous reports that Peterson had turned himself in, that doesn’t seem to be the case. A warrant has been issued for his arrest.

DEVELOPING: A warrant has been issued for the arrest of Adrian Peterson. At this time, Peterson is not in custody.

The photos shown above are reportedly from a week after the incident, which is an indication that they were much more severe than what is shown. In addition to this, CBS Houston followed up on its original report of the incident.

The beating allegedly resulted in numerous injuries to the child, including cuts and bruises to the child’s back, buttocks, ankles, legs and scrotum, along with defensive wounds to the child’s hands. Peterson then texted the boy’s mother, saying that one wound in particular would make her “mad at me about his leg. I got kinda good wit the tail end of the switch.”

Peterson also allegedly said via text message to the child’s mother that he “felt bad after the fact when I notice the switch was wrapping around hitting I (sic) thigh” and also acknowledged the injury to the child’s scrotum in a text message, saying, “Got him in nuts once I noticed. But I felt so bad, n I’m all tearing that butt up when needed! I start putting them in timeout. N save the whooping for needed memories!”

The Vikings just announced that they have deactivated Peterson, which means he will not play Sunday against the New England Patriots.

According to Glazer, Peterson now has to travel to Texas to turn himself in. The interesting thing here is that the grand jury that Peterson testified in front of decided against indicting him before reversing that decision. We aren’t too sure what can actually be read from that.

Peterson was taken into custody early Saturday morning in Montgomery County, Texas. He was released a short time later on $15,000 bond (via NFL.com).

TMZ is reporting that Peterson could face up to two years in prison if convicted.

NFL spokesman Brian McCarthy said on Saturday that the incident will be reviewed under the league’s personal conduct policy. It remains to be seen what action, if any, the league or Vikings (outside of deactivating him for Sunday’s game) might take in the near future.