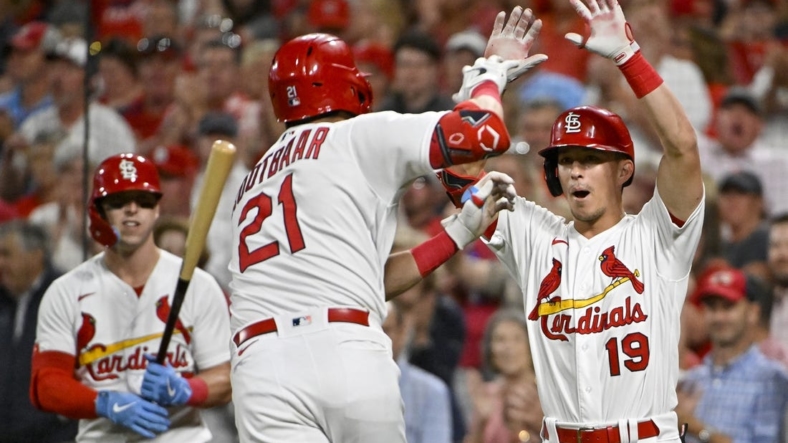 In their record-setting 325th start together, pitcher Adam Wainwright earned the win and catcher Yadier Molina drove in a run as the St. Louis Cardinals beat the visiting Milwaukee Brewers 4-1 Wednesday.

Wainwright and Molina broke the career mark for pitcher-catcher starts set by Mickey Lolich and Bill Freehan of the Detroit Tigers in 1975.

Nolan Arenado and Lars Nootbaar hit home runs for the National League Central-leading Cardinals (84-59), who increased their lead over the second-place Brewers (76-67) to eight games.

Wainwright (11-9) limited the Brewers to one run in five innings on eight hits and two walks. Andre Pallante, Jordan Hicks, Giovanny Gallegos and Ryan Helsley each pitched a scoreless inning, with Helsley earning his 17th save.

The Brewers took a 1-0 lead in the second inning. Jace Peterson led off with a single, moved to third base on Omar Narvaez’s single and scored on Tyrone Taylor’s sacrifice fly.

The Cardinals countered by moving ahead 2-1 in the bottom of the inning. Arenado led off with his homer, then Brendan Donovan hit a single, went to third on Alec Burleson’s one-out single and scored on Molina’s single.

Milwaukee loaded the bases in the fourth inning with two outs on singles by Taylor and Christian Yelich, then Adames’s walk. But Tellez flied out to end the threat.

Nootbaar’s homer leading off the fifth inning pushed the Cardinals’ lead to 3-1.

The Brewers threatened in the seventh inning when Tellez drew a one-out walk and Hunter Renfroe hit a single. But Wong grounded into a forceout and McCutchen struck out.

Pujols made it 4-1 in the eighth inning by hitting a double for his 2,200 career RBI.