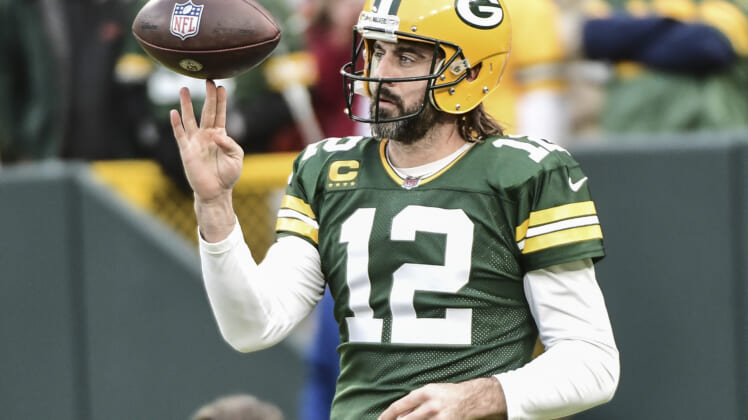 They say lightning doesn’t strike in the same spot twice. Tell that to the Green Bay Packers. Just 14 years after Brett Favre threw his 442nd career passing touchdown with the Packers, Aaron Rodgers surpassed him.

Taking on the Cleveland Browns on Christmas Day in Week 16, on their second possession, Rodgers found wide receiver Allen Lazard for an 11-yard score. The touchdown placed AR12 ahead of Favre in yet another category in the record books. Here’s the play where history was made.

Shortly after Rodgers made history, Favre, his old mentor, shared a message on the Lambeau Field video boards, congratulating him on the prestigious honor. He also had a request for Rodgers that included a message for Packers fans.

If you didn’t click, the brief clip was short and sweet, but it featured Favre requesting Rodgers to go out and win another Super Bowl for the Packers organization, a task both quarterbacks completed once in their day.

Fans in attendance in Wisconsin went crazy as they heard the message from their former Super Bowl-winning quarterback. With the Packers holding the best record in football at 11-3, another league championship is certainly within their grasp.

However, Rodgers still has a ways to go if he wants to catch up to Favre’s career passing touchdown total, accounting for when he spent time with the New York Jets and cross-state rivals, Minnesota Vikings. Favre has 508 passing touchdowns in his career. Still, if AR12 truly can deliver the well-established franchise another ring, it would be hard to place any other Packers quarterback ahead of him, as far as all-time greats.