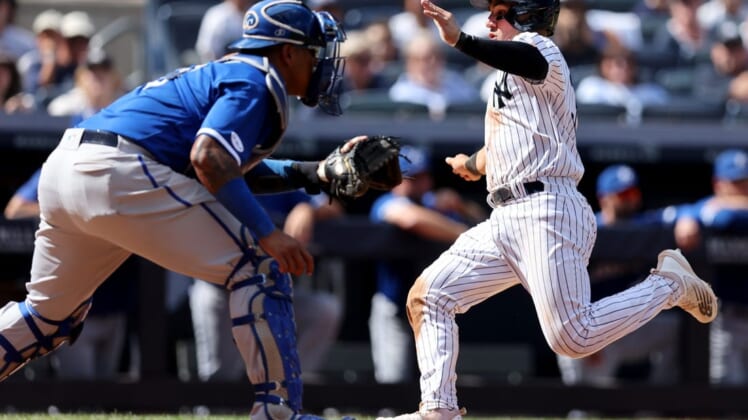 Aaron Judge hit a two-run homer in the second inning, the 200th of his career, and the host New York Yankees defeated the Kansas City Royals 8-2 on Saturday afternoon.

Judge hit his 42nd home run of the season when he connected on a 2-2 fastball from Jonathan Heasley and parked it in the right-field seats to give the Yankees an early 4-0 lead.

It was Judge’s 12th home run in his past 14 games and fourth of the series. He hit a game-ending homer off Scott Barlow on Thursday, then capped an eight-run eighth inning with a grand slam Friday after reaching 40 homers earlier in that game.

Judge reached 200 homers in his 671st career game. The only player to get there quicker was Ryan Howard, whose 200th career homer occurred in the first baseman’s 658th career game back in 2009.

Judge reached base in his first four plate appearances Saturday before flying out in the eighth. He singled and scored on a double by Gleyber Torres in the first and drew walks in the fourth and sixth after his latest homer.

DJ LeMahieu led off the game for the Yankees with a home run as New York capitalized on three Kansas City errors to pull away.

LeMahieu also had an RBI single in the fourth after rookie shortstop Maikel Garcia dropped a pop up by Isiah Kiner-Falefa and Whit Merrifield had a throw from third baseman Nicky Lopez go off his glove on a force play.

Kiner-Falefa also scored in the sixth on a throwing error by Royals catcher Salvador Perez. Kiner-Falefa opened the sixth inning with a walk, was balked to second by Josh Staumont, stole third and scored when Perez’s throw sailed into left field.

The Yankees’ Matt Carpenter added a solo homer in the seventh, getting to 15 homers in his 106th at-bat as with the club.

Yankees left-hander Aroldis Chapman fanned two while getting through the sixth inning, while Clarke Schmidt finished with three scoreless innings for his second career save.

Perez hit a sacrifice fly and Garcia had an RBI single for the Royals, who have been outscored 30-7 during a five-game losing streak.

Heasley (1-6) returned from a brief stint on the injured list due to a shoulder issue and allowed six runs (four earned) and six hits over 3 1/3 innings.