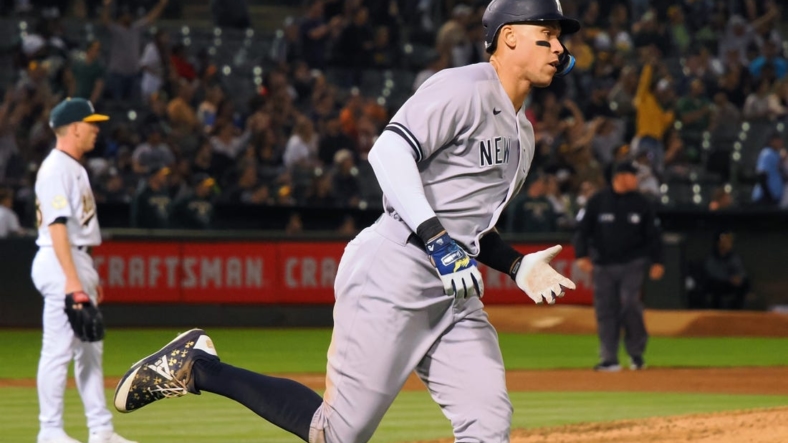 Aaron Judge bombed his 49th home run, right-hander Gerrit Cole became the first in the majors to reach 200 strikeouts this season and the visiting New York Yankees made it two straight over the Oakland Athletics with a 3-2 victory Friday night.

Judge’s homer, a three-run shot in the fifth inning, accounted for all the Yankees’ scoring in their fifth consecutive win. The 427-footer to straight-away center field came on JP Sears’ first pitch after Oswaldo Cabrera and DJ LeMahieu had opened the fifth of a scoreless game with consecutive singles.

Sears (5-1), acquired in the Frankie Montas trade with the Yankees earlier this month, had walked Judge in his first two plate appearances, including intentionally in the third inning.

The homer moved Judge within 12 of Roger Maris’ all-time American League record. The Yankees have 36 games remaining, including two more in this series.

The Northern California native finished the game 1-for-2 with three walks, the second time this season he’s been walked three times in a game. The intentional walk was his ninth of the season.

The three runs were all Cole (10-6) and two relievers would need on a night when the A’s managed just five hits, one being Jonah Bride’s first major league homer off Cole in the seventh.

In improving his record in Oakland to 4-0, Cole struck out 11 in 7 1/3 innings, his seventh double-digit strikeout outing of the season. The 11th pushed his major-league-leading total to 200, the fifth time he’s reached the milestone in his 10-year career.

He was pulled one out into the eighth with Nick Allen, who had singled, on first base. Jonathan Loaisiga came on to get Shea Langeliers on a pop out and struck out Sean Murphy, before turning the ball over to Wandy Peralta for the ninth.

The left-hander served up a one-out double to Chad Pinder and an RBI single to pinch-hitter Dermis Garcia, but then struck out Bride and pinch-hitter David MacKinnon for his third save.

Sears worked six innings for the A’s, charged with all three Yankees runs on eight hits. In losing for the first time in four starts since joining Oakland, he walked four and struck out three.

Cabrera, who began the series hitting .160, collected three hits for the second straight night. He finished the game hitting .286.

Jared Koenig shut out the Yankees on one hit over the final three innings to keep the A’s within arm’s length en route to their fourth loss in the last five games.