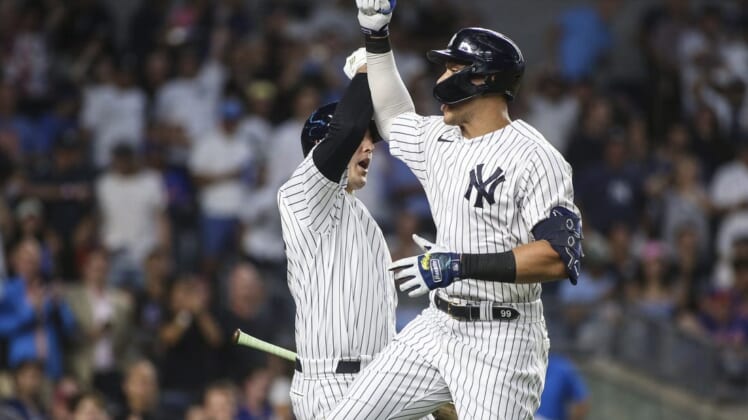 Aaron Judge hit a home run off Max Scherzer for his major league-leading 47th of the year as the host New York Yankees beat the New York Mets 4-2 Monday night in the Subway Series.

The Yankees won consecutive games for the first time since getting three straight wins over the Kansas City Royals July 28-30 following two losses at the Mets. Since their previous winning streak, the Yankees are 6-15 in their past 21.

Andrew Benintendi (2-for-3) accounted for New York’s other three runs. Benintendi scored on a sacrifice fly by DJ LeMahieu in the first inning after hitting a tiebreaking two-run homer in the seventh off Sunday’s 4-2 win over the Toronto Blue Jays. He went on to add an RBI double and a run-scoring single.

Judge hit his 30th solo homer this season in the third for a 2-0 lead, belting a 1-1 fastball into the right field seats. Judge’s 383-foot drive was his 14th homer since the All-Star break and first since Aug. 12 in Boston.

Domingo German (2-2) outpitched Scherzer, allowing two runs (one earned) on four hits in 6 1/3 innings. He struck out three without a walk and was lifted after allowing a two-run homer to Daniel Vogelbach, which followed rookie second baseman Oswaldo Cabrera dropping a pop-up by Pete Alonso.

After German whiffed Francisco Lindor, Alonso hit a pop up to right field. Cabrera backpedaled as right fielder Marwin Gonzalez raced in. Gonzalez called off Cabrera and the ball caromed off the webbing of the second baseman’s glove as the two slightly collided.

Vogelbach then hit an 0-1 curveball into the Yankees’ bullpen in right-center to pull the Mets within 3-2. After German exited to a standing ovation, Ron Marinaccio got the next four outs, and Jonathan Loaisiga needed 12 pitches to get the final four outs for his first save.

Scherzer tied a season high by allowing four runs on seven hits in 6 2/3 innings. He struck out three and walked one to remain one win shy of No. 200 for his career.