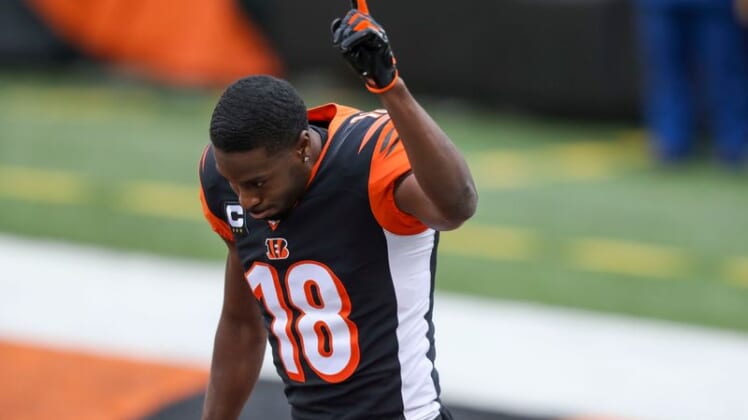 It was just a few years ago that A.J. Green was seen as one of the top wide receivers in the NFL and bound for Canton. Unfortunately, injuries have derailed the seven-time Pro Bowler’s career with the Cincinnati Bengals.

In what can’t be seen as too much of a surprise, Green has opted to depart Cincinnati after a brilliant 10-year career. He’s now reportedly trading in the Ohio cold for the Arizona desert.

According to NFL Media’s Ian Rapoport, A.J. Green has inked a one-year deal with the Arizona Cardinals. Another report indicates that the deal is for up to $8.5 million with $6 million guaranteed.

There’s certainly a lot of layers to this signing. Green will now go from catching passes from then-rookie Joe Burrow in Cincinnati to being on the receiving end of bullets from Kyler Murray in Arizona. It gives the Cardinals another weapon on offense and will also lead to some questions about the status of another all-time great in the desert.

Over the course of the past couple offseasons, Fitzgerald has contemplated retirement. The best player in Cardinals franchise history turned 37 years old last August and is coming off the worst performance in his brilliant 17-year career.

Currently a free agent, this likely means Fitzgerald has opted to retire or could potentially play for a contender elsewhere. He’s long been linked to the Minnesota Vikings, a city in which his father has been a media mainstay for decades. However, it seems highly unlikely that Fitzgerald will ever play for another team.

A.J. Green signing is big for the Cardinals

Acquired in a lopsided trade with the Houston Texans last offseason, DeAndre Hopkins was absolutely brilliant in his first year with Arizona. One of the game’s top receivers hauled in 115 passes for 1,407 yards. He’s a top-three pass-catcher from this position.

Outside of that, Christian Kirk has been a pretty solid WR3 throughout his young career. However, he saw a downtick in production as a third-year player in 2020.

By signing Green, the Cardinals add a true possession receiver to go with Kirk’s downfield ability and Hopkins’ all-around brilliance. Here’s a dude who averaged 80 receptions for nearly 1,200 yards from 2011-17. If he can stay healthy, a change of scenery could help A.J. Green return to earlier-career form.

This move also comes after Arizona added three-time NFL Defensive Player of the Year J.J. Watt to the mix earlier in the offseason. It’s a clear sign that the Cardinals believe that they can vie for a title in the ultra-competitive NFC West in 2021.