76ers tip off rough stretch vs. Knicks without James Harden 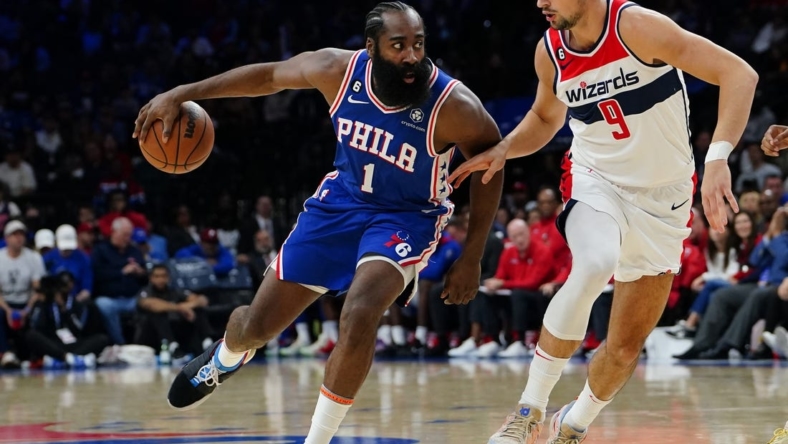 The Philadelphia 76ers learned Wednesday night how difficult it can be to play two games without Joel Embiid.

Not even 24 hours later, the Sixers learned they’ll have to figure out how to play a lot longer without James Harden.

Harden will be on the sidelines Friday night, when the 76ers are scheduled to host the New York Knicks in the first game of the season between the longtime rivals.

Both teams were off Thursday after falling at home Wednesday. The 76ers trailed for the final 42 minutes of a 121-111 loss to the Washington Wizards. The Knicks blew a 23-point first-half lead in a 112-99 loss to the Atlanta Hawks.

Harden appeared to be his usual self while helping to shoulder the load without Embiid on Wednesday night. He finished with 24 points and a team-high 10 assists while playing just over 35 minutes — figures right in line with his seasonal averages of 22.0 points and 10.0 assists in 36.8 minutes per game.

But ESPN reported Thursday afternoon that Harden suffered a right foot tendon strain against the Wizards and is expected to miss a month.

The injury comes as the 76ers begin to embark upon a challenging November schedule. After facing the Knicks, Philadelphia is slated to play nine straight games against teams that either reached the playoffs or fell in the play-in tournament last season.

The 76ers struggled Wednesday in their second straight game without defending NBA scoring champion Embiid, who has not been with the team as he battles a non-COVID illness.

Philadelphia shot 46.4 percent and got outrebounded 43-32 Wednesday without Embiid, who ranked fifth in the NBA in rebounding last season.

The Knicks had an unexpected opportunity to take on an undermanned opponent Wednesday night, when All-Star guard Trae Young suffered a left eye contusion while contesting a drive to the basket by Julius Randle early in the third quarter.

Young was sidelined for just under 13 minutes. But the Hawks, who completed their comeback by taking a 66-65 lead on a layup by Young moments before he got hurt, outscored the Knicks 31-22 with Young on the bench. They extended their lead to as many as 19 points following his return with 7:04 left in the game.

The loss was the third straight for the Knicks and continued a discouraging trend of frittering away big leads. New York has lost a game in which it led by at least 23 points five times in the last 30 seasons — but three times this calendar year.

“We were up 23 or whatever it was and they obviously cut that down,” Knicks guard Jalen Brunson said. “We were easing our way into the second half and they were putting their foot to the pedal. They were going 100 miles an hour and we were going 50. We’ve got to do better at that point.”