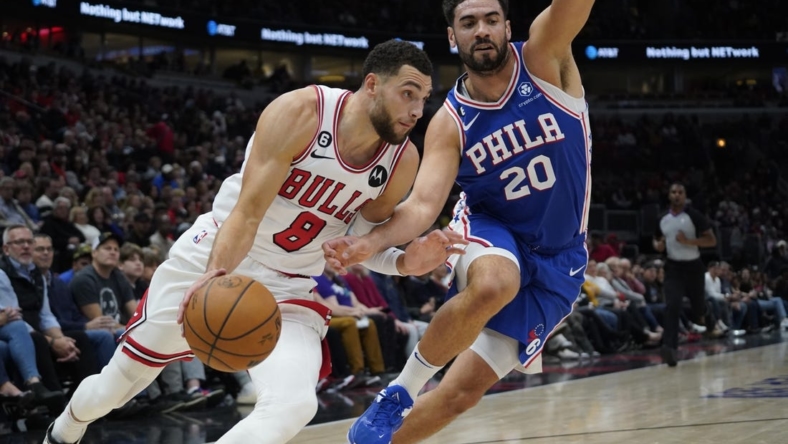 Joel Embiid scored 25 points to lead six players in double figures and James Harden registered a double-double of 15 points and 11 assists to boost the visiting Philadelphia 76ers to a 114-109 victory against the Chicago Bulls Saturday night.

Philadelphia extended its series winning streak to 12 games, including six in a row at United Center. The 76ers prevailed despite committing a season-high 17 turnovers.

DeMar DeRozan scored 24 points to pace a balanced attack for the Bulls, who have lost two straight. Zach LaVine scored 15 of his 29 points after halftime, while Nikola Vucevic had a double-double of 23 points and a game-high 19 rebounds.

Chicago overcame a sluggish start to lead in the closing minutes, but was unable to hold off Philadelphia. Embiid swished a go-ahead 3-pointer with 18.1 seconds left, moments after missing a pair of free throws.

The Bulls’ Alex Caruso missed a potential tying 3-pointer with 4.4 seconds to play. Chicago had zero field goals after a Vucevic jumper gave the team a 107-105 edge with 4:14 left.

Philadelphia led by as many as 19 points in the first half but led 64-56 at the break.

After shooting 37 percent in the first quarter, the Bulls were 48% from the floor in the second quarter while effectively attacking the paint. The Bulls converted 17-of-19 free throws in the first 24 minutes compared to 6-for-7 for Philadelphia.

Chicago benefited from foul trouble against Embiid and Maxey, who played a combined 19 minutes in the first half. The Bulls’ surge continued into the third quarter as the team grabbed a 74-72 advantage on a DeRozan jumper with 6:46 to go in the third.