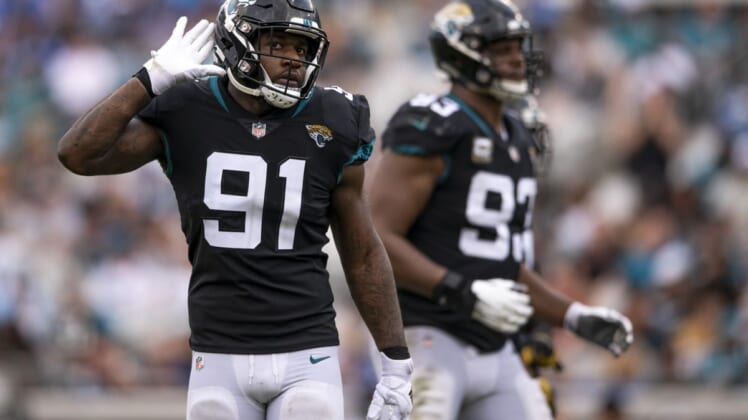 The Raiders are reportedly looking to get better by acquiring more talent at the NFL trade deadline. Here are six realistic ways they can swing a deal.

Like the NFL draft and free agency, the trade deadline stirs a lot of chatter among fanbases that hope to acquire impact talent or hold on to prominent players with expiring or pricey contracts. The Oakland Raiders have already dealt cornerback Gareon Conley, but ESPN’s Adam Schefter revealed the team has phoned clubs for linebackers and pass-rush help.

Because the league suspended linebacker Vontaze Burfict for the remainder of the season for a repeated history of violations, and the Raiders’ subpar pass rush, the team’s interests shouldn’t surprise anyone.

At 3-3, the Raiders have a legitimate chance to push for a playoff spot. The Silver and Black’s upcoming game with the Houston Texans will either put this squad squarely on the postseason radar or dim those hopes a bit. Nevertheless, 3-4 won’t knock Oakland completely out of the picture.

The Raiders record in a wide-open AFC wild-card race should encourage general manager Mike Mayock and head coach Jon Gruden to buy at the trade deadline and approach with some aggressiveness for premier players at needy positions.

Other than a pass-rusher and linebacker, the Raiders could use help at wide receiver despite Tyrell Williams’ ability to practice this week. He’ll likely battle a pain threshold because of plantar fasciitis for the remainder of the season.

With the Raiders roster needs in mind, we’ll take a look at six potential proposals that Mayock and Gruden should ponder before the October 29 deadline.

Don’t lose too much sleep over a fourth-round pick as Mayock accumulated three of them in last year’s draft. He can wheel and deal to recoup another early Day 3 selection. Also, keep in mind, Oakland has three third-rounders.

According to Manish Mehta of the New York Daily News, the New York Jets are willing to move wideout Robby Anderson.

“Gang Green has made it clear to teams that wide receiver Robby Anderson can be had before the Oct. 29 trade deadline for the right price, according to sources,” Mehta wrote.

After a 33-0 loss to the New England Patriots, the Jets fell to 1-5. They have a very slim chance at making a run for the postseason with the undefeated (7-0) defending Super Bowl champions and Buffalo Bills (5-1) in the division. New York should dangle players with expiring deals on the trade block.

Anderson will become an unrestricted free agent in the offseason, which is why the Raiders could start low on a proposal. Secondly, the 26-yer-old’s production dropped after a solid 2017 campaign, partially because of quarterback Sam Darnold’s inconsistencies last year and his three-game absence with mononucleosis from Weeks 2 to 5.

On the positive side, Anderson would provide a missing component to the passing game. In New York, he built a reputation for going over the top and beating defenders with his blazing speed. The fourth-year veteran scored on a 92-yard touchdown reception against the Dallas Cowboys in Week 6.

Perhaps Gruden can work his magic and convince Anderson to stay. If so, he could light defenses up on the perimeter or serve as an upgrade out of the slot.

Here’s a flashback for Raiders fans who remember heated discussions on whether the team should draft wideout Amari Cooper or defensive lineman Leonard Williams with the No. 4 overall pick in 2015.

Oakland chose Cooper and the pick seemed like the right choice for most of 3.5 seasons. Now, they will have an opportunity to acquire Williams via trade. The Jets placed him on the market and multiple clubs have shown interest, per ESPN’s Adam Schefter.

Coming out of USC, Williams gushed about the possibility of suiting up for the Silver and Black, per Bryan Fischer of NFL.com.

“The Raiders have kind of been like my favorite, hometown team,” Williams said. “I love their colors, I love their tradition, I love their defense. I want to go as high as possible and shooting for that number one spot. But if I did end up dropping to the Raiders, I would love to play for them.”

In 2016, Williams recorded 68 tackles, 11 for loss, seven sacks and two forced fumbles, but he hasn’t been able to top his best year. Last season, the 6-foot-5, 302-pound defensive lineman finished with five sacks and 11 takedowns for loss of yardage, which confirms his ability to rush the passer on the interior.

The Raiders have a deep interior tackle rotation with Johnathan Hankins, P.J. Hall, Maurice Hurst and Corey Liuget, but Williams would join the group as the most accomplished pass-rusher.

Williams has 16 tackles, no sacks and a pass deflection this season. His percentage of defensive snaps has dropped over the last three weeks in a contract year. The 25-year-old’s modest production and a recent dip in playing time could allow the Raiders to steal him for a third-rounder.

Here’s a blockbuster proposal: the Raiders can aim high for a pass-rusher, who’s not readily available on the trade block. Yet, the compensation may force the Jaguars’ proverbial hand in a deal.

The Jaguars selected pass-rusher Josh Allen with the No. 7 overall pick in this year’s draft. He leads the team with five sacks. The defensive line also features Calais Campbell, who has another year left on his deal, on the opposite side. Jacksonville’s 2017 third-rounder, Dawuane Smoot, has flashed through seven games with three sacks and three tackles for loss.

With three other pass-rushers at defensive end, the Jaguars may think about trading Ngakoue rather than extending his expiring contract. He’ll likely cost more than $20 million annually after racking up 31.5 sacks since 2016—the 12th-most in that stretch.

Ryan Day of Big Cat Country discussed Ngakoue’s production and his thoughts on a potential deal for the Pro Bowl defensive end.

“He was drafted at the top of the third round and has produced like a first rounder at one of the top three most important position in football,” Day wrote. “I wouldn’t be shocked to see him traded, but I would be even more disappointed than when Jalen Ramsey left.”

Secondly, with a relatively young secondary, Oakland can’t continue to take the field with a subpar pass rush. That leaves the defensive backs in a precarious situation, having to cover their assignments for extended periods.

If the Raiders want to instantly improve the weakest aspect of their defense, they’ll have to pay up in draft capital now and finances next year, but Ngakoue is worth the price.

In 2017, Jourdan Lewis put together a solid rookie campaign, logging the second-most pass deflections (10) among Cowboys defenders with an interception.

In 2018, the Cowboys hired defensive backs coach Kris Richard, who also has a hand in play-calling, and his arrival changed Lewis’ role going forward, per Matt Holleran of Blogging the Boys.

“The new defensive backs coach, who played a big role in the creation of the Seattle Seahawks’ ‘Legion of Boom,’ had a very particular mold of corner he likes in his defense. Current safety at the time, Byron Jones, fit Richard’s prototype perfectly. Richard played a huge part in the decision to move him back to corner, and it paid off exponentially as he created an [Pro Bowler].”

Richard reduced Lewis’ role in favor of a better physical fit in his vision. After starting seven games during the 2017 term, Lewis has opened with the first-stringers once ever since. This year, he’s accepted a small role, playing the fourth-most defensive snaps among Cowboys cornerbacks behind Jones, Chidobe Awuzie and Anthony Brown.

Despite his limited opportunities on the field, Lewis has recorded one of only three interceptions for the Cowboys defense with two pass deflections this year. He can line up inside or on the outside. His versatility may appeal to the Raiders because of Lamarcus Joyner’s recent struggles covering the slot, allowing 14 receptions for 148 yards and a touchdown on 20 targets, per Pro Football Focus.

Lewis’ rookie deal expires at the end of the 2020 term, so he could man the perimeter if the team doesn’t re-sign Daryl Worley in the spring.

Oakland can reunite defensive coordinator Paul Guenther with a familiar face. In 2017, with the Cincinnati Bengals, the play-caller used Carl Lawson as a hybrid edge-rusher. The Auburn product finished second on the team in sacks (8.5) while leading all rookies in the category that year.

Lawson was a bright spot on a mediocre Bengals defense that ranked 16th in scoring and 18th for yards allowed. Last year, he tore his ACL in Week 8 and played a modest role in his first three contests this season. However, the 24-year-old logged a sack as a starter in Week 6 against the Baltimore Ravens.

Burfict left Cincinnati and played well under Guenther before the league handed down a yearlong suspension. We could see a similar result for Lawson, who performed at the level of a first-rounder in a limited role as a rookie.

Based on Bengals’ defensive snap counts, Lawson is behind budding pass-rusher Sam Hubbard and two-time Pro Bowler Carlos Dunlap in the pecking order at defensive end in Cincinnati.

If Guenther and Lawson can rediscover their magic at a new destination, the Raiders pass rush would have an immediate spark on passing downs.

We’ll continue an attempt to raid Cincinnati’s 0-7 roster with a defense that’s giving up the most yards this season.

The winless Bengals aren’t going to turn this season around any time soon. They will likely pick within the top five in the 2020 draft. Mike Brown, the owner, hasn’t committed to quarterback Andy Dalton long term, and wideout A.J. Green continues to rehab his ankle after undergoing surgery in July. The franchise should embrace a full rebuild, which means selling its replaceable assets.

In March, Preston Brown signed a three-year deal with the team, but he’s provided a minimal effect on defense with 43 tackles, a fumble forced and one recovered. The 26-year-old may need a change of scenery with a more experienced play-caller. Lou Anarumo only held an interim defensive coordinator role with the Miami Dolphins during the 2015 campaign before his full-time position with the Bengals this season.

Brown arrived in Cincinnati after Guenther accepted the Raiders’ job, but he put together a solid first year with the team, registering 42 tackles, two interceptions and four pass deflections. The veteran linebacker suffered a knee injury, which derailed his season after seven games.

The Bengals selected linebacker Germaine Pratt in the third round of this year’s draft. While his snap count has gradually increased, Brown’s time on the field took a slight hit over the last two weeks.

Headed nowhere this year, the Bengals may entertain an offer for Brown, who’s playing ahead of an upstart defender on the depth chart.

Why Should the Raiders Be Aggressive Buyers?

Since Gruden’s arrival, the Raiders have shown the willingness to execute deals as the buyer and seller. He’s not afraid of blockbuster moves to shake up the roster. With that said, the proposals discussed above highlight realistic best-case scenarios without giving away too much draft capital.

Despite the Raiders’ 3-3 record, they’re still a young team with plenty of room for growth. The addition of a player like Ngakoue, Williams or Anderson could speed up the process toward late-season contention for a playoff spot.

Note that five of the six targets are defensive players. If the Raiders want to compete against some of the best teams that have high-powered offenses, they must address their 29th-ranked scoring defense. Oakland can graduate from playoff hopeful to a legitimate contender with one or two proven playmakers on that side of the ball.