David Kenyon
Dallas doesn’t have anyone who can stay healthy, and it remains to be seen if Joseph Randle is the real deal.

NFL training camps afford an opportunity for players to either establish themselves as starters or show they deserve playing time, but sometimes injuries affect the rotation.

Teams preach the value of the “next man up” out of necessity, but it doesn’t always work out for the best. However, some players around the league have been taking full advantage of injuries to teammates normally higher on the depth chart.

Devonta Freeman and rookie Tevin Coleman both sustained hamstring injuries and will be sidelined for two weeks, per ESPN’s Vaughn McClure. Stepping in is Antone Smith, a career backup with a unique history. Last season, he logged just 23 carries and 13 receptions, but Smith tallied five touchdowns—each of which was 38 yards or more. Though the 29-year-old won’t keep the starting job, Smith can show he deserves regular playing time in 2015. 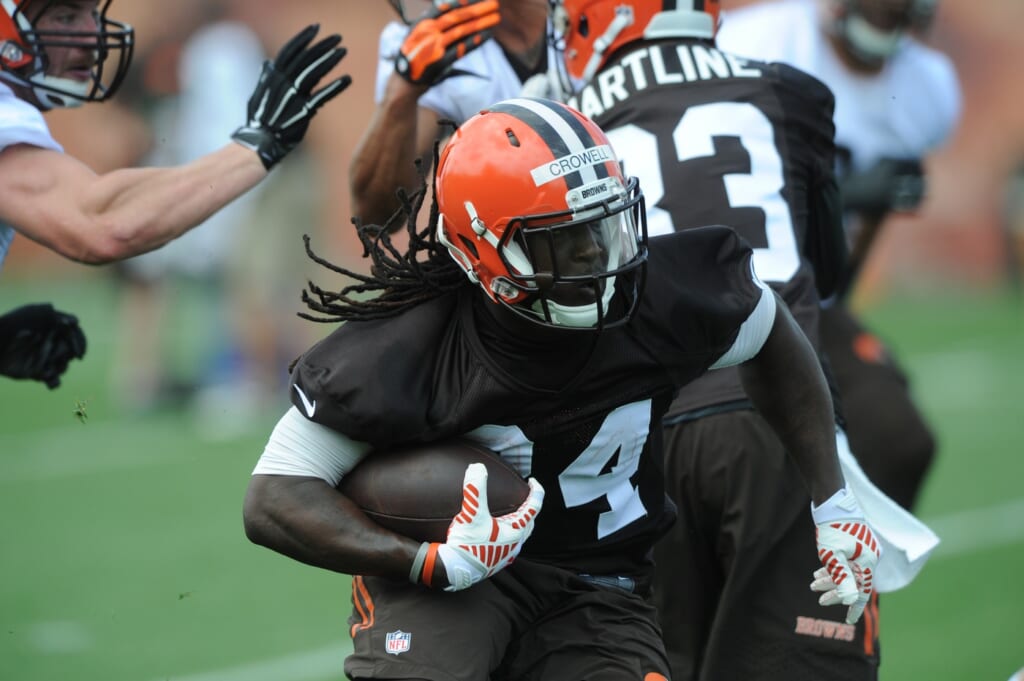 Courtesy of USA Today Images: Crowell is the clear-cut beneficiary of two injuries in Cleveland.

It’s a situation quite similar to Atlanta. The Browns are without second-year back Terrance West (calf) and rookie Duke Johnson (hamstring). However, Crowell can start to lock down a starting role, especially as coaches grow a little frustrated with his teammates. Crowell tallied 607 yards and eight touchdowns in his rookie season, and if the recent events continue, he’ll shatter those marks in season No. 2.

The Philadelphia Eagles considered Boykin an expendable piece, and the Steelers needed a cornerback once they found out rookie Senquez Golson could undergo season-ending shoulder surgery. Pittsburgh hasn’t wasted time inserting Boykin into the lineup, either. ESPN’s Adam Caplan writes the Steelers are using the 25-year-old at right cornerback. Boykin seems likely to be a fixture in the Pittsburgh defense.

Chicago used its No. 7 overall pick of the 2015 NFL draft on West Virginia receiver Kevin White, but the heralded target hasn’t been on the practice field because of a shin injury. Consequently, the Bears have turned to Eddie Royal, a former teammate of Jay Cutler who signed a free-agent contract this spring. Dan Weiderer of the Chicago Tribune notes Royal has already impressed teammate Alshon Jeffery and offensive coordinator Adam Gase. Expect Royal to be a consistent contributor for the Bears.

Figured Ameer Abdullah and Eddie Royal were in for strong 2015 seasons. Almost positive of it now after visiting camps this week.

Todd Gurley and Melvin Gordon have received a majority of the hype dedicated to rookie running backs, but Ameer Abdullah has slowly started to grab headlines. Incumbent starter Joique Bell hasn’t practiced due to knee and Achilles injuries. Mike Garafolo of Fox Sports says Abdullah has dazzled in training camp. The Nebraska product appears on track for a larger role than merely a third-down back.

Dallas must replace DeMarco Murray, the NFL’s leading rusher last season. However, the three-man competition between Joseph Randle, Darren McFadden (hamstring) and Lance Dunbar (ankle) hasn’t been much of one. According to NFL Media’s Ian Rapoport, the starting job is Randle’s to lose. Even after McFadden and Dunbar return from injury, Randle should keep his spot and run behind the league’s best offensive line in 2015.