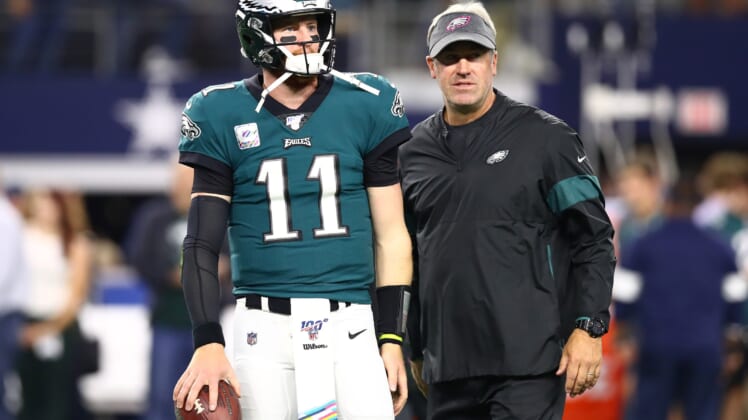 The pressure is mounting on Philadelphia Eagles coach Doug Pederson and quarterback Carson Wentz to turn this team around after a disastrous Week 1 performance. If this team is going to contend in 2020, it’s time for the Eagles to make huge adjustments and to recreate a dynamic offense.

Philadelphia’s fans came into the season with hope thanks to a roster loaded with talent. A few injuries and a season-opening loss to Washington changed everything. Blowing a 17-point lead is one thing, but the Eagles’ offense vanishing in the second half of Week 1 is an alarming red flag for the remainder of the season.

The complete lack of offensive execution, mainly in the final two quarters, can be blamed on various issues. Washington’s front seven racked up eight sacks, Wentz struggled in the pocket and made poor decisions. Quite frankly, Pederson’s offense didn’t look like it belonged on an NFL field. After the game, Wentz described the team’s performance as “a tale of two halves.” It’s accurate and which version we see moving forward will decide the Eagles’ fate in 2020.

Before the Eagles’ faithful throw in the towel on what could be another turbulent season, there is hope for this team. It will just take a few changes from their two biggest leaders.

Wentz isn’t a pocket quarterback and that’s something Pederson can take advantage of even more moving forward. According to FiveThirtyEight, Wentz posted a 94.4 QBR when throwing outside of the pocket. It led the NFL, beating out the likes of Patrick Mahomes, Lamar Jackson and Russell Wilson.

From inside the pocket, Wentz’s rating dropped to 57.9, which ranked 15th in the league. Pederson must adapt to the modern NFL, putting more emphasis on an offense that utilizes Wentz’s athleticism. After all, eight of the quarterbacks in the 2019 playoffs rushed for 100-plus rushing yards during the regular season, via Pro Football Reference.

Eagles must establish the running game

Miles Sanders is ready to be the workhorse for Philadelphia. Last year, Sanders recorded 818 rushing yards, 509 rushing yards, and six total touchdowns. At 211 pounds, Philadelphia’s top running back runs a 4.49 with great hands, speed and power. Moving forward, Pederson can make Sanders a focal point of the offense. Along with Sanders, Boston Scott offers similar abilities to what Darren Sproles provided in previous years.

Wentz’s gunslinger mentality is a skill, but it comes with serious consequences. He takes pride in his aggressiveness as a quarterback, which fits Pederson’s style. But, quality is better than quantity. Philadelphia scaled back its vertical shots in 2019 and it impacted Wentz’s stats. He posted a 64.8 QBR, his second-best mark since MVP caliber season (77.2). A big reason for last year’s efficiency was the lack of deep threats. In an injury-plagued season, Wentz found new ways to push this team into the playoffs by taking what the defense gave him and making the right deep throws.

There is now far more speed on the outside. Wentz must use the team’s deep threats as a weapon in his arsenal, but not his primary attack. Let the receiver stretch the field, while star tight ends Zach Ertz and Dallas Goedert make plays underneath. The icing on the cake for this approach, Sanders can be a great weapon out of the backfield.

Get creative with play-calling

There are quite a few similarities in personnel between the Eagles and Chiefs’ offenses. Both teams have tremendous speed on the outside, athletic specimens at tight end and a do-it-all running back. While Wentz might not be on Mahomes’ level, he is still a playmaker. Coaching is another difference between the two. While Pederson is an Andy Reid disciple and they share West Coast offense philosophies, the gap between the offensive minds is huge. Pederson hasn’t consistently showcased an innovative and consistent offense. With the exception of the famous “Philly Special”, the Eagles’ offense has looked bland far too often.

While RPOs, tight end screens and crossing routes are a staple in this scheme, Pederson must find more ways to feed his best players in open space. The Chiefs move Tyreek Hill around the field, lining him up in different spots and finding creative ways to get him into the open field. First-round pick Jalen Reagor can be a special player, but the Eagles must find unique ways to help him.

Wentz’s two interceptions in Week 1 helped sink the Eagles. Worse yet, his issues extended beyond the turnovers. Wentz has 57 career fumbles, with 20 being recovered by the opponent. While the unpredictable health of the offensive line doesn’t help, he must do a better job of protecting the football.

On Sunday, the Eagles will host the Los Angeles Rams for the home opener. Protecting the football, protecting Wentz and creating quick throws is especially important in Week 2. Aaron Donald will wreak havoc on Philadelphia’s offensive line and cornerback Jalen Ramsey can erase a wide receiver, creating big problems for Philadelphia. If Wentz takes advantage of his skills and Pederson adjusts this offense, the Eagles can beat the Rams and ride a dynamic offense to a great season.