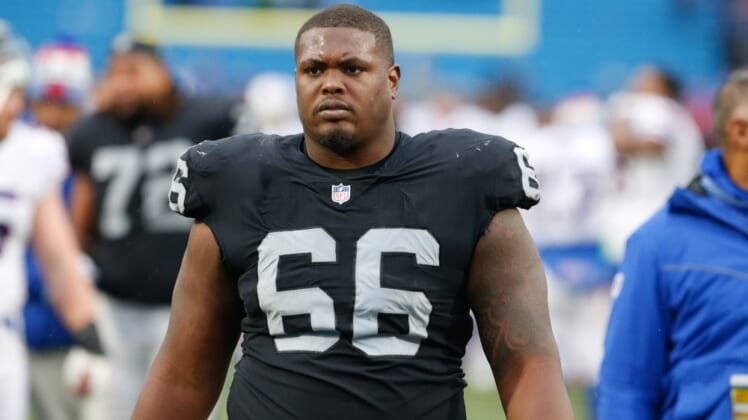 The Raiders roar out of the bye the winners of two straight but they might not be done tinkering with their roster.

Following a Week 6 bye, the Oakland Raiders have a crucial matchup with the NFC North division-leading Green Bay Packers. If they win, naysayers will likely change their tunes about the Silver and Black’s 2019 outlook. Perhaps this team moves into the playoff contender conversation.

Before we dig into the upcoming matchup, let’s go over the latest on injuries, positions roles and potential changes to the roster. The Raiders had extra time to heal, take a look at what worked, add wrinkles to schemes and tweak their personnel. What can we expect for the remainder of the season?

At some point in the coming weeks, the Raiders offensive line will look even better with right guard Gabe Jackson back on the field. He suffered an MCL injury during a joint training camp practice with the Los Angeles Rams. Coming out of the bye week, the sixth-year pro seems ready to suit up.

Jackson practiced Monday, and he’s primed to rejoin the offensive line Sunday or in the following week against the Houston Texans. The 6’3″, 335-pound mauler set a high bar for his unit, stating this five-man group could outdo the 2016 offensive line, which ranked 11th in run-blocking adjusted line yards (4.39) and No. 1 in pass protection, per Football Outsiders.

As an experienced veteran who played through most of last season with partially a torn pectoral muscle, Jackson shouldn’t have a problem adding another boost to the interior of the front line. Running back Josh Jacobs will have bigger running lanes and seems well on his way to a top-five finish in rushing yards.

With today’s news on Trent Brown, his future may be less certain depending on the way the Raiders react to the lawsuit.

Wide receiver Tyrell Williams missed the outing in London with a foot injury. The Raiders haven’t provided much information other than he’s “progressing well,” per The Athletic’s Vic Tafur:

Following wideout Antonio Brown’s theatric exit, Williams moved into the lead role at the position, scoring in all four of his games with the Silver and Black. Without him, tight end Darren Waller has a tough task in finding holes in pass defenses knowing all eyes would follow his every move as the team’s top pass-catcher.

At this point, Williams seems 50-50 at best to suit up Sunday. His status may come down to pain tolerance or the idea that he’s able to play without a setback. If the Raiders want to contend, the 27-year-old gives them a much better chance to beat their upcoming opponents in Green Bay and Houston.

Keelan Doss is an inspiring hometown story, but the Raiders don’t seem quite ready to unleash him for a significant number of offensive snaps yet. He took the field for 18 plays at wideout through Week 4, and then lined up for 54 percent of offensive snaps in London.

Now, with Jones in the fold, Doss could see his offensive workload reduced again, but the former Buffalo Bills wideout must show his grasp of what he called a “complex” playbook.

“The offense is very complex, a lot of stuff that goes into it,” Jones said during a locker room interview. “Guys have been here since training camp, and I’ve been here only for a few days, so I’m trying to catch up to the pace that they’re at.”

Unlike Doss, a rookie undrafted free agent, Jones has shown flashes on the professional level, logging 56 receptions for 652 yards and seven touchdowns during the 2018 campaign. He has the tools to move into the No. 2 spot opposite Williams.

At 6’2″, 200 pounds, Jones can become a viable red-zone target—an aspect of his game that’s on film from last year. He’s also quick enough to gain a step on defenders and turn on the afterburners for chunk plays.

We may not see much from Jones in the next couple of weeks. With that said, don’t be surprised if he shows flashes to equal Williams in the passing game or commands the most targets if the Raiders’ top wideout experiences lingering effects from his foot injury.

Nevin Lawson’s Fit in the Secondary

Cornerback Nevin Lawson served a four-game suspension for violating the league’s performance-enhancing drug policy. He’s back in the fold and provides versatility with the ability to line up in the slot or on the perimeter.

Lawson could provide depth, but he’s not someone to rely on as a top-three cornerback. That’s what the 28-year-old has shown in his recent outings with the Detroit Lions.

If you ask Lions writers, Lawson possesses the field awareness to position himself in the right spot to make stops and force turnovers, but for one reason or another, doesn’t come through with impact plays:

The data backs up the criticisms of Lawson’s play. According to Pro Football Focus, he committed nine penalties and allowed 45 receptions for 568 yards and five touchdowns on 72 targets. Quarterbacks had a 110.2 passer rating when going after him in coverage.

Lawson also had some struggles during the preseason, losing his assignments in coverage, which led to big plays downfield.

Finally, Lawson stands at 5’9″, 190 pounds. So, defensive coordinator Paul Guenther must show caution when moving him to the outside against bigger wide receivers.

Don’t expect Lawson to completely change the outlook of the secondary. If he remains on the roster through the season, he’ll see action in a limited role.

The Raiders could welcome more help at cornerback with Isaiah Johnson set to return at some point this year. He suffered a broken bone in his face during the first preseason game and landed on injured reserve.

The Raiders would have a 21-day window to activate Johnson following his first practice. In that scenario, he’d likely have to earn his keep on special teams before playing defense. Keep in mind, the rookie fourth-rounder started out as a wide receiver and then transitioned to cornerback for two years at Houston.

Tafur believes Johnson’s return would allow Guenther to shuffle the deck on the back end of the defense.

“Once he is activated, Johnson will be a key member of the special teams unit, as well as work in at cornerback and allow the Raiders to move Daryl Worley to more of a hybrid safety position,” Tafur wrote.

However, because Johnson is a raw talent who didn’t even play a full exhibition game, it’s hard to expect him to handle starting duties at cornerback coming off injured reserve. He’s a developmental asset with upside but needs reps.

If Worley moves to a hybrid safety role, rookie second-rounder Trayvon Mullen will need to show some flashes. As a Day 2 pick, he’s the guy that must fast-track his progression in order to give the defensive backs position flexibility.

Mullen has played 77 defensive snaps in five contests. The Clemson product gave up a few catches in the season opener against the Denver Broncos, allowing three receptions for 34 yards and a touchdown on four targets, per Pro Football Focus.

However, as a rookie, it’s too early to view Mullen as a disappointment. We haven’t seen enough of him after his first game. The Raiders coaching staff has to allow the first-year cornerback to make mistakes and go through growing pains. He’ll have missteps, but the 22-year-old must learn in order to grow and solidify the secondary.

If the coaching staff puts Mullen on the field, Worley would likely float around with Gareon Conley and Lamarcus Joyner in the other two cornerback spots.

The league suspended linebacker Vontaze Burfict for the year, which keeps him off the field even if the Raiders make a playoff run.

Although the Raiders signed rookie linebacker Dakota Allen off the Rams practice squad and promoted Justin Phillips to the main roster, general manager Mike Mayock and head coach Jon Gruden should consider a trade for another veteran at the position.

As a healthy unit, Tahir Whitehead and Nicholas Morrow can function as an adequate pair on the second level of the unit, but the Raiders are an injury away from a potential disaster in the middle of their defense.

Secondly, Whitehead has shown lapses in coverage. He’s allowed 10 receptions for 124 yards and a touchdown this season, per Pro Football Focus.

The trade deadline approaches October 29, but Oakland can kick the tires on free agents like Mason Foster, Zach Brown or hybrid defender Deone Bucannon. They would all walk in the door as instant upgrades over the rookies or special teamer Kyle Wilber at linebacker.