It’s repeated every single season around the NFL. A couple teams shock the football world by performing much better than experts and fans anticipated prior to the start of the year. The most obvious recent examples of this were the San Francisco 49ers in 2011 and Seattle Seahawks the following year. To a lesser extent, both the Kansas City Chiefs and Arizona Cardinals were considered big surprises last season.

Now that we are preparing for preseason play and are just over a month away from the start of the regular season, it makes sense to check in on some teams that may surprise the NFL world this year. Here are three such teams. 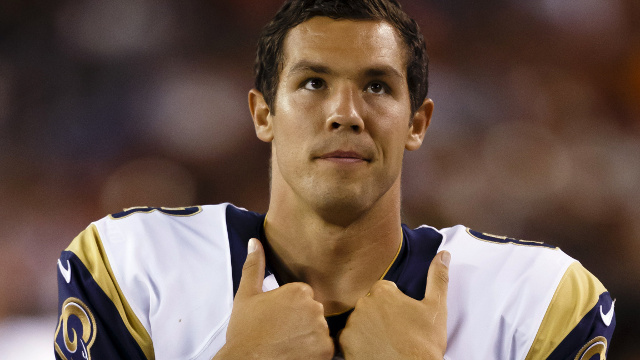 Courtesy of Rantsports.com: The Rams success in 2014 will depend heavily on Bradford.

It’s going to be incredibly difficult for St. Louis to break through in the NFC West this season, but it definitely possesses the talent to compete for a wildcard spot in the conference. The additions of first-round picks Greg Robinson and Aaron Donald in the 2014 NFL draft filled two glaring holes on this vastly underrated roster.

Robinson will start at left guard out of the gate, further solidifying an offensive line that appears to be much improved from a season ago. For his part, Donald will act as another anchor a long the interior of St. Louis’ defensive line with yet another former first-round pick in the form of Michael Brockers. Those two will team up with Robert Quinn and Chris Long to form what has to be considered the best 4-3 defensive line in the NFL. Quinn and Long combined for 27.5 sacks, which was just a few less than the total for some teams around the league.

If the Rams defensive line is considered a strength, there are some questions on that side of the ball at linebacker and in the secondary. Starting weakside linebacker Jo-Lonn Dunbar was arrested in mid July on battery and disorderly conduct charges. While it remains to be seen if the NFL will suspend him for that incident, he’s a weak link on a pretty good front seven. James Laurinaitis, in the middle, is more of your traditional player off the line of scrimmage. He is good in pass coverage, but won’t make much of an impact behind the line of scrimmage. Meanwhile, second-year player Alec Ogletree had a tremendous rookie season, tallying nearly 120 tackles and six forced fumbles.

Janoris Jenkins and Trumaine Johnson also lead a pretty good cornerback group that added Lamarcus Joyner to the mix in the 2014 draft. It is, however, the Rams’ safety play that should worry head coach Jeff Fisher and Co.

The largest question mark heading into the season is Sam Bradford and the passing game. Can the former No. 1 overall pick improve from what has been a mediocre NFL career thus far? For the first time in his five years with the Rams, Bradford has a tremendous supporting cast. Outside of what promises to be an improved offensive line, St. Louis boasts a solid young running back tandem in Zac Stacy and Tre Mason. Stacy, who put up 1,100 total yards and eight scores as a rookie, figures to take some pressure off Bradford. If the quarterback can find any consistency with a deep, but uproven receiver group, the Rams could actually have an above-average offense.

If things come together in the passing game and the Rams secondary holds up, they could very easily challenge for one of the two wildcard spots in the NFC. As with every team in the division, the one major issue St. Louis will face is a difficult schedule. This could impede its progress a great deal in 2014.

Courtesy of USA Today: Lovie Smith is a dramatic upgrade from a scheme standpoint over Greg Schiano.

To say that Tampa Bay was a hot mess last season would be a dramatic understatement. From Greg Schiano’s antics in his last year as head coach to the entire MRSA scare, things just didn’t work out for the Buccaneers. They had the talent to compete on a weekly basis, but a divide between the players and coaching staff as well as numerous injuries plagued the team.

With Lovie Smith now at the helm, coaching will not be an issue for the Buccaneers. The veteran head man led the Chicago Bears to four double-digit win campaigns and a Super Bowl appearance in nine seasons as their head coach.

Following Smith to Tampa Bay is quarterback Josh McCown, who was one of the biggest surprises in the NFL last year. The 35 year old went from a school teacher to starting for a Bears team that was in the midst of a playoff race. He responded by putting up 13 touchdowns compared to just one interception in eight games (five starts). At the very least, McCown will stabilize the Buccaneers quarterback situation.

More importantly, Tampa Bay will be getting running back Doug Martin back after an injury-plagued sophomore season. The talented ball carrier missed 10 games due to injury in 2013, compiling just 456 yards and one touchdown in the process. This came on the heels of the former first-round pick putting up 1,926 total yards and 12 scores as a rookie. Joining Martin in one of the most-talented backfields in the NFL are Bobby Rainey, Mike James, Jeff Demps and rookie Charles Sims. This should help take the load off the passing game and create some balance on offense.

#Buccaneers CB @Alvern_1: Going up against Vincent Jackson and Mike Evans in practice every day is only going to make me better. #SXMNFL

Speaking of the passing game, Tampa Bay picked up physical receiver Mike Evans, who will team up with another physical specimen in Vincent Jackson, in the first round of the 2014 draft. Needless to say, McCown will not be lacking skill-position talent on offense.

Defensively, it was all about adding talent to a unit that had some solid young playmakers. After releasing Darrelle Revis, Tampa Bay was able to use that money to pick up pass-rush specialist Michael Johnson and an elite cornerback in Alterraun Verner. Both fill positions that were considered weaknesses, especially after the Revis release.

Courtesy of Bengals.com: Johnson is one of the most-talented DE’s Tampa Bay has had in some time.

While Johnson didn’t get to the quarterback all too often last year in Cincinnati, he is one year removed from a 11.5-sack campaign. Returning starters Lavonte David, Gerald McCoy, Mark Barron and Dashon Goldson fill out what has to be considered a really talented defense.

Unlike St. Louis before, the Buccaneers have a legitimate shot at winning their division. While the New Orleans Saints appear to be vastly improved on defense from a year ago and the Atlanta Falcons seem to be back to full health, the NFC South has been one of the trickiest divisions to predict in recent seasons. Including the Carolina Panthers title last year, this division has seen three different division winners in the last three years. There is no reason to believe Tampa Bay can’t make it a fourth in as many years. 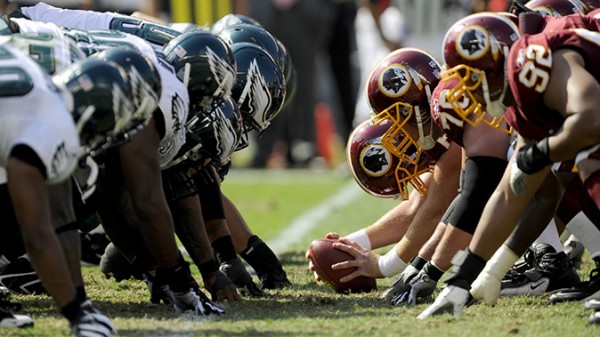 Courtesy of USA Today: Washington could very well contend with Philadelphia in 2014.

Speaking of divisions that are up for grabs, the NFC East has been the definition of mediocrity over the years. Sure some will say that the Philadelphia Eagles have pulled away from the pack, but it’s important to note that it took a Week 17 win against the Dallas Cowboys for them to grab the division. And Washington was the division winner in 2012. The talent is definitely here for success, it’s all about answering some important questions heading into the season.

First and foremost, Robert Griffin III needs to return to 2012 form. Dealing with a disastrous coaching effort and injuries throughout the 2013 campaign, RGIII simply wasn’t the player we all know he can be. If he’s 100 percent, the Redskins offense will fly high under new head coach Jay Gruden. Couple that with the addition of DeSean Jackson to what is already a loaded skill-position group in Washington, and there is no reason to believe this unit can’t rank in the top 10 of the NFL in scoring. After all, Jackson and returning starter Pierre Garcon combined for 195 receptions, nearly 2,700 yards and 13 scores in 2013. That’s one of the most productive receiver tandems in the NFL.

Outside of Washington’s talent at wide receiver, it boasts one of the best young running backs in Alfred Morris, who has tallied over 3,000 total yards in his first two NFL seasons. Tight end Jordan Reed returns from injury after putting up a solid performance in nine games as a rookie. In addition to this, the Redskins boast a decent offensive line, which is led by one of the premier left tackes in the NFL in the form of Trent Williams.

While Washington’s success on offensive will depend heavily on RGIII, its defense is a huge question mark at this point. Outside of Brian Orakpo at outside linebacker, it appears that Washington’s defense lacks the necessary talent to be as much as average. That could ultimately be the downfall here. Despite what DeAngelo Hall might think about DeAngelo Hall, he’s simply not a starter-caliber corner in the NFL at this stage in his career. The Redskins safety play is also a major question mark. Brandon Meriweather can’t cover worth a lick and free-agent acquisition Ryan Clark is well past his prime.

In order for the Redskins to surprise people this season, they are going to have to win a ton of high-scoring affairs. But let’s face reality here for a second. The NFC East doesn’t boast a single defense that would scare any team in the NFL. And the Redskins have one of the most-talented offenses in the conference. This could be enough to go from last place to the division title.