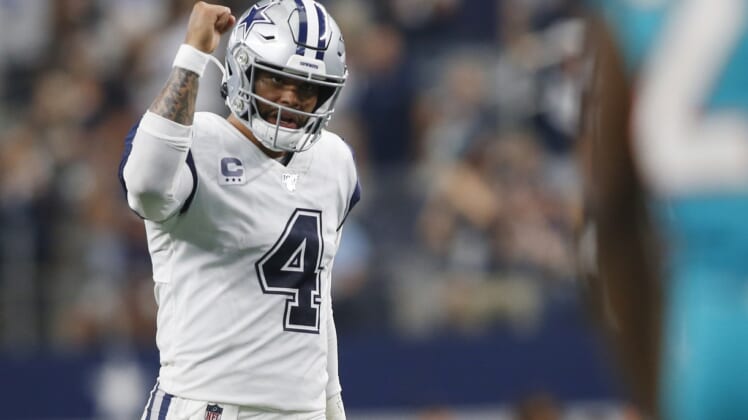 The NFL is releasing its 2020 regular-season schedule tonight, and there are some teams we absolutely cannot wait to watch play this season.

Due to an unprecedented free agency quarterback class this past offseason, there has been a tremendous shift of power around the league. The greatest quarterback of all time left his team of two decades and is now in Florida. Other top teams made some major moves to bolster their championship odds.

It’s going to be an amazing season, whenever it starts. These are the five teams that have piqued our interest ahead of the 2020 campaign.

If any team has what it takes to knock the Kansas City Chiefs off their throne in the AFC, it might just be the Colts.

What general manager Chris Ballard did this offseason is nothing short of remarkable. He added one of the best interior linemen in the league, DeForest Buckner in a pre-draft trade. He also inked a top cornerback, Xavier Rhodes, to a one-year, prove it deal. These players will spark a defensive resurgence in Indy.

On offense, the Colts will be formidable, indeed. Philip Rivers was just the first big piece. The veteran is now leading an offense that features a dominant offensive line, exceptional weapons on the perimeter, and a lethal duo at running back.

It remains to be seen whether John Elway made the right moves this offseason. But nobody can say he didn’t go after it hard.

The Denver defense will be dangerous. Von Miller is among the league’s most potent pass rushers, and his young protege Bradley Chubb is dangerous, too. The Broncos traded for top cornerback A.J. Bouye, who replaces Chris Harris, and beefed up the front seven with a few draft picks.

The biggest reason the Broncos have our eye, though, is due to what Elway did to spark his offense. Throwing support behind second-year quarterback Drew Lock, Denver loaded up on weapons. The additions of Jerry Jeudy and K.J. Hamler should lead to a ton of explosive plays in the passing game. Signing veteran running back Melvin Gordon gives the Broncos an awesome 1-2 punch behind Lock.

Kyler Murray was electric last year. The No. 1 overall pick in 2019 won Offensive Rookie of the Year honors, for good reason. He’s lightning in a bottle, and his dual-threat abilities gave the top defense in the NFL fits.

Now the Cardinals have provided this young star with one of the NFL’s best receiving options. Trading for DeAndre Hopkins was one of the most stunning moves of the offseason. And it’s one that should lead to Arizona’s offense taking off in a big way.

On the defensive side of the ball, Arizona landed one of the best players in the draft. Isaiah Simmons is going to be a star. He’ll spearhead what should be an improved defensive effort as the Cardinals look to take their place as a playoff contender in the brutal NFC West.

First of all, what Jerry Jones did in the 2020 NFL Draft was spectacular. Having CeeDee Lamb fall into their laps was one of the biggest stunners in the draft. From there, things only got better for Dallas. The value the ‘Boys got with their selections blew everyone away. And it sets them up for what should be a very entertaining 2020 season.

Assuming there’s no contract hiccup with Dak Prescott, the offense is going to be explosive with a capital E. Adding Lamb to a lineup that includes Amari Cooper, Michael Gallup, Blake Jarwin and Ezekiel Elliott gives Dallas one of the best offensive arsenals in the NFL.

Defensively, the additions of Trevon Diggs and Neville Gallimore in the draft, along with Dontari Poe and Gerald McCoy in free agency, mitigated a lot of the sting of Dallas’ free-agency losses.

When you think about the NFL teams you can’t wait to watch in 2020, the Bucs have to be at the top of the list. Whether you are eager to see if they can win a Super Bowl or are itching to see if the train goes off the rails, everyone is eager to watch this show.

Tom Brady, of course, is at the center of it all. The NFL’s greatest quarterback of all time left New England after two decades and six Super Bowl titles. And then he brought Rob Gronkowski with him to Tampa Bay. The Buccaneers have an offense that could be good enough to win a title.

With Todd Bowles calling the defense, not to mention the talent he has to work it, Tampa Bay has a team that could win a ton of games. Regardless of what happens, we’re going to be dialed in to every second of this team’s 2020 campaign.