We already know that team success around the NFL is largely predicated on how the quarterback is performing. If a team has an elite guy under center, it will most likely be playing meaningful football in January.

The five quarterbacks listed below have each had some success in the NFL. However, all five are seen as players who need to step their game up in order for their team to perform at a higher all-around level.

Whether it’s a new supporting cast or the maturation that comes with the experience of starting in the NFL, these five guys are primed for breakout 2015 campaigns. 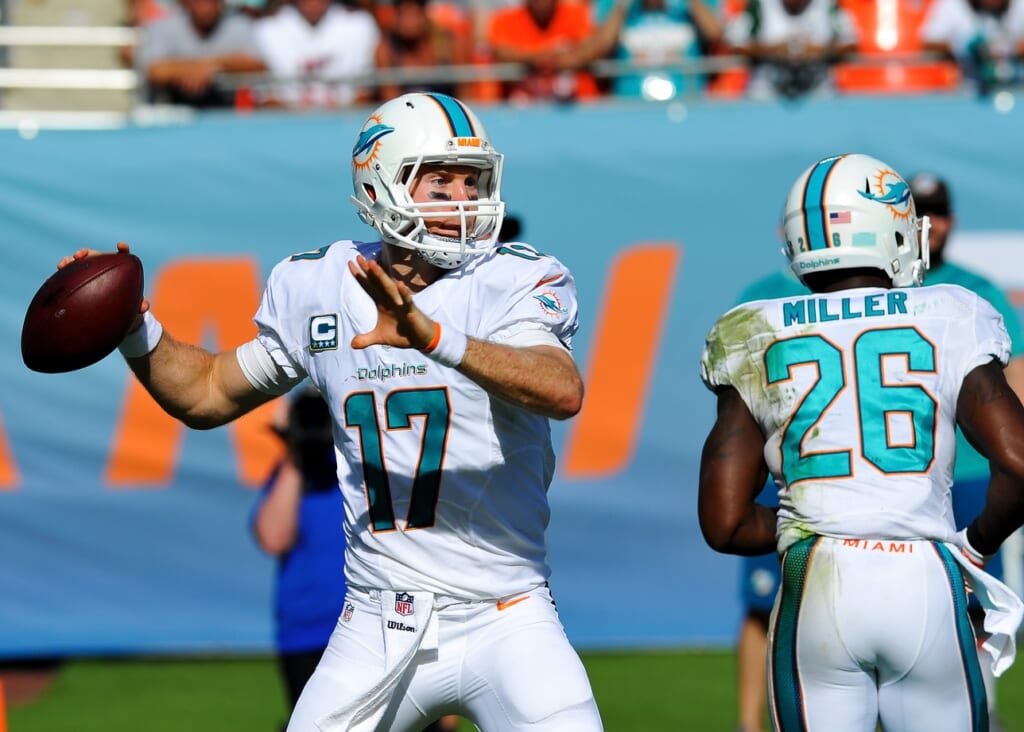 Courtesy of USA Today Sports: Look for Tannehill to continue his progression towards elite status in 2015.

Fresh off a new contract, Tannehill has been given that vote of confidence from the brass in Miami. He’s also coming off the best season in what has been a pretty solid three-year career. In fact, Tannehill’s progression from the bottom rung of NFL starters to an above-average signal caller has been quite impressive.

The former Texas A&M wide receiver put up over 4,000 passing yards with 27 touchdowns in 2014, both career highs. He also saw his interception numbers drop from 17 in 2013 to just 12 this past season. With new additions Kenny Stills, Greg Jennings, DeVante Parker and Jordan Cameron to catch passes in 2015, there’s no reason to believe Tannehill won’t progress this year. Look for a breakout campaign from the former first-round pick and the upstart Dolphins.

Most first-year quarterbacks find themselves victims of inconsistency. Bridgewater pretty much threw that narrative out the window in 2014. He put up over 2,900 passing yards in 12 starts, throwing more touchdowns (14) than interceptions (12). After starting his career with one touchdown and five interceptions in his first four games (three starts), the Louisville product played extremely well during the remainder of his rookie campaign. He tallied at least one touchdown pass in his final 10 starts and threw 13 touchdowns with only seven interceptions in his final nine starts. It’s not a coincidence that Minnesota went 5-4 during that span.

With Adrian Peterson likely to be in the offensive backfield this season, Bridgewater will find himself with what could be one of the top-five rushing attacks in the NFL. If that happens, he’s going to have more single coverage to throw into. The addition of deep threat Mike Wallace at wide receiver also comes into play here. Look for Bridgewater to take that next step from promising rookie to above-average second-year starter in 2015.

Statistically, Carr’s rookie campaign was great. He threw nine more touchdowns (21) than interceptions (12). He also tallied over 3,200 passing yards and led the Raiders to wins in three of their final five games. On tape, Carr’s first year was nowhere near as impressive. By virtue of a watered-down scheme by then offensive coordinator Greg Olson, Carr struggled getting the ball down the field.

Of 39 qualified quarterbacks, the former second-round pick ranked dead last in yards per attempt at 5.5 last season (via Pro Football Focus, subscription required). He also completed just 15-of-71 (21 percent) of his passes that traveled 20-plus yards down the field.

With Olson now out of the equation and rookie first-round pick Amari Cooper set to make an impact, Carr has the necessary surroundings to help him improve in this aspect of the game. He also as a veteran in Michael Crabtree that should act as that consistent possession receiver opposite Cooper. Last year’s stats may have been fine, but look for this talented young signal caller to improve in aspects of the game that the box score doesn’t take into account. Also look for him to lead the Raiders to much more than three wins this year. 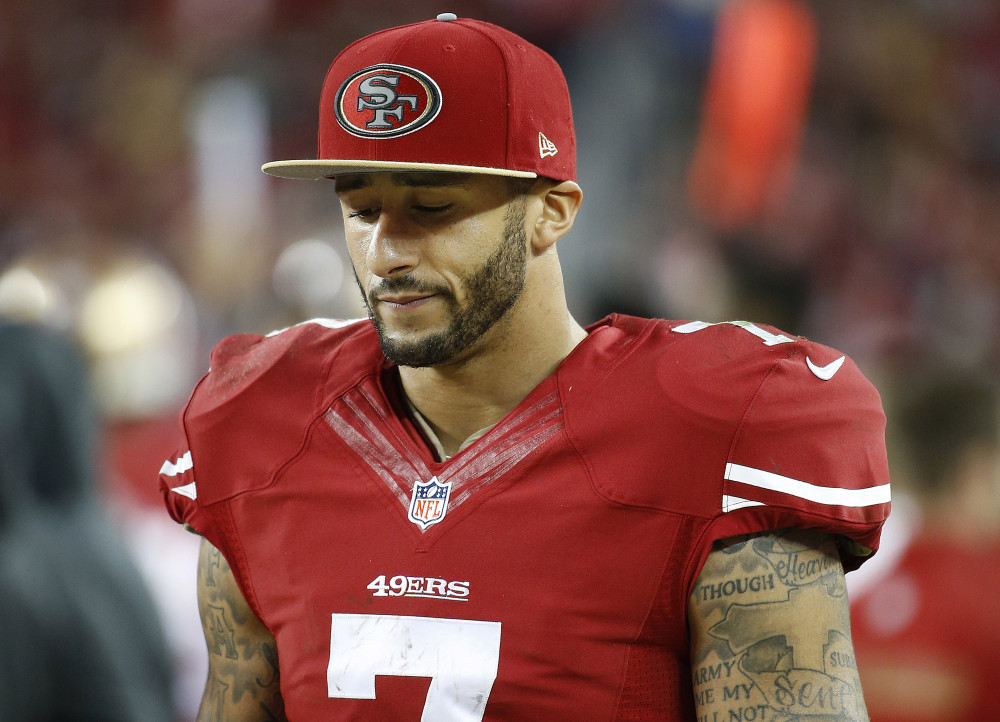 Courtesy of USA Today Sports: Kaepernick has been much maligned in recent months, but look for him to prove skeptics wrong.

The narrative around the football world since the midway point of last year is that Kaepernick has regressed as a quarterback. While he surely didn’t progress in 2014, there wasn’t much of a regression. There were also factors outside of the quarterback’s control that played a role here.

First let’s look at Kaepernick’s splits from 2013 to last year:

As you can see, Kaepernick’s completion percentage and passing yards increased last year. He also rushed for more yards and a higher average in 2014 compared to the previous season. On tape, Kaepernick did a better job reading defenses and finding his secondary receivers—two things that have haunted the quarterback since his days at Nevada. The primary problem from last year is that Kaepernick took 52 sacks compared to 39 in 2013. Some of that surely had to do with the quarterback holding on to the ball too long, but San Francisco’s offensive line was a hot mess compared to previous years.

It’s also important to note that the internal thought process among players in San Francisco is that former offensive coordinator Greg Roman held San Francisco’s offense, Kaepernick in particular, back a great deal last season. While we have no idea whether the new staff will be any better, it’s still something to look at. With the additions of a deep threat in Torrey Smith and a potential pass-catching dynamo in running back Reggie Bush, Kaepernick appears to have the best set of weapons he’s had since taking over the starting job in 2012. This season might be a make-or-break campaign for the fifth-year signal caller, but look for him to prove skeptics wrong.

We want to crack on Chip Kelly for what has been a questionable offseason, but there’s little doubting just how good of an offensive mind he is. Heck, Kelly made Mark Sanchez into a serviceable quarterback last season. That’s no small accomplishment. Running a quarterback-friendly scheme, this enigmatic head coach should get the most out of the much-maligned Bradford.

And for Bradford’s part, he hasn’t been half bad when healthy over the past few years. Over the course of his last 16 starts, the former first-round pick has thrown 28 touchdowns compared to 11 interceptions for a solid 92.7 quarterback rating. For comparison’s sake, Atlanta Falcons quarterback Matt Ryan threw 28 touchdowns with 14 interceptions for a 93.9 rating in 16 starts last year.

When looking at what Bradford might be able to accomplish in 2015, it’s important to look at his supporting cast—a supporting cast that just wasn’t there with the Rams. Philadelphia’s offensive line finished as the eighth-best pass-blocking unit in the NFL last year (via Pro Football Focus, subscription required). The team also added 2014 rushing leader DeMarco Murray to its offensive backfield. There is a nice amount of talent here. Now take into account Kelly’s scheme, and it’s reasonable to assume Bradford will have a breakout 2015 campaign should he remain healthy.