5 Potential MLB Trades That Make Too Much Sense

With the Major League Baseball trade deadline less than two weeks away, we are sure to see some pretty big trades take place in the coming days.

We are already hearing specific names being bandied about on the trade block. The Philadelphia Phillies are surely going to look to send a couple of their veterans packing for youngsters. Meanwhile, there has also been talk that Cincinnati and Milwaukee may be on the verge of blowing it up.

Here are five potential trades that make too much sense heading into the non-waiver deadline late this month.

1. Cole Hamels to the Houston Astros

Houston needs to make a strong play for another starter prior to the deadline in order to compete with the Los Angeles Angels in the American League West. Now 1.5 games behind the Angels and just a few games up in the wild card, the Astros can’t afford to see their first-half success go to waste down the stretch. Adding someone of Hamels’ caliber at the top of a rotation that includes Cy Young candidate Dallas Keuchel would be absolutely huge for A.J. Hinch’s squad. And in reality, everyone knows Hamels is angling for a way out of Philadelphia.

Not only does this potential deal make sense for the Astros, there’s little doubt that the Philadelphia Phillies needs to find a way to move Hamels for some quality young players. In teaming up with Houston, Ruben Amaro Jr. and company can hand-pick from one of the best farm systems in baseball.

2. Scott Kazmir to the Los Angeles Dodgers for Yasiel Puig

The worst-kept secret in baseball is that Los Angeles is looking to add another top-end pitcher to the rotation. And with all due respect to Hamels, this Oakland Athletics pitcher might be a more valuable commodity on the trade block. A free agent at the end of the season, Kazmir would cost less in terms of a financial commitment than other veteran starters on the market. He’s also been consistently good since the start of the 2014 campaign, posting a 20-13 record with an ERA just over three during that span.

For the Dodgers, trading Puig makes a ton of sense. By now it’s known that he’s not exactly well-liked within the locker room. Sending him packing could be a way for the Dodgers to avoid dipping into the farm system. And in reality, a chance of scenery might be good for the struggling Cuban.

We know A’s general manager Billy Beane doesn’t exactly rebuild, and there’s no reason for him to do that right now. Oakland might be 43-51 on the year, but it has the talent in place to contend next season. Acquiring someone of Puig’s talent in the outfield could be a coup here.

The Mets might be in second place and just three games behind the Washington Nationals in the National League East, but they aren’t going anywhere with this offense. Consider this: New York has not scored five-plus runs in a single game since mid June. Talk about the pitching holding up its end of the bargain with the hitting doing next to nothing.

There’s also been multiple reports come out of Milwaukee that Gomez could very well be on the trade block. If that’s the case, this appears to be a match made in heaven. 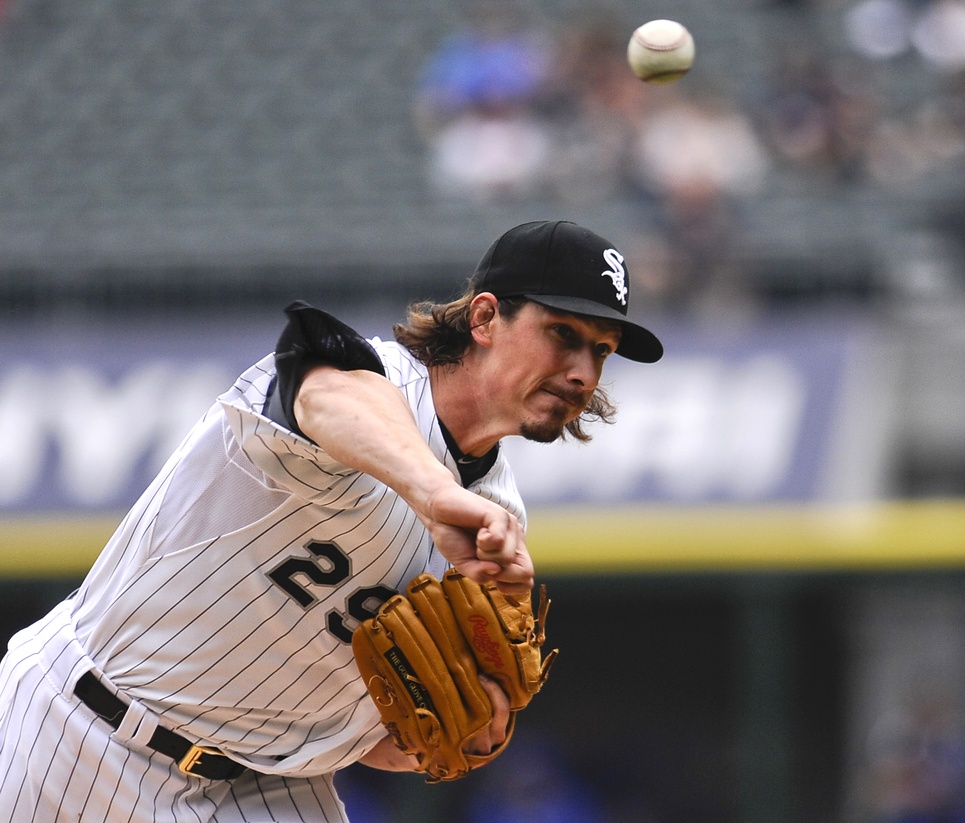 Courtesy of USA Today Sports: The Giants could use someone of Samardzija’s ilk.

It might just be time for the Chicago White Sox to blow everything up. The retooling mentality utilized by this team simply hasn’t worked. At 42-48 on the season, the White Sox are in last place in the American League Central. Now 12.5 games behind the mighty Kansas City Royals, there isn’t much hope of contention moving forward. Why not trade some valuable veterans for young assets? That’s the question general manager Rick Hahn has to be asking himself.

Struggling to find much consistency in the rotation this season, the Giants remain in clear reach of the Los Angeles Dodgers in the National League West. They are five games over .500 and just 3.5 back in the division. Adding a talented arm in Samardzija could go a long way in the team looking to repeat as World Champions. Someone like starting pitching prospect Keury Mella could be dangled as bait here.

It’s been a while since the Yankees added an elite talent at the trade deadline, but that’s something general manager Brian Cashman may very well do this season in order to keep the team atop of the American League East moving forward. Michael Pineda and Masahiro Tanaka have put up decent seasons, but both have ERA’s above 3.50. Meanwhile, CC Sabathia has struggled a great deal. In reality, the Yankees don’t have that top-end rotation arm to take them deep into the playoffs.

Enter into the equation a player in Cueto who can dominate on a consistent basis. At 29 and set to become a free agent after this season, he could actually be a long-term solution atop the Yankees’ rotation. Though, acquiring him would likely come at the cost of at least one top-10 prospect and a couple mid-tier youngsters.