Now that we know Houston Rockets center and eight-time All-Star Dwight Howard is on the trade block, there promises to be a ton of speculation regarding his status leading up to next week’s trade deadline.

The primary issues for Houston is that his average annual salary of $22.4 million will make it hard for teams that might otherwise want him to get in on the action.

In addition to that, Howard is expected to utilize his opt-out clause in order to become a free agent during the summer. That might limit the haul Houston receives if it were to trade him.

One thing we do know here: The Rockets currently find themselves under .500 heading into the All-Star Break, which is a clear indication that the on-court pairing of James Harden and Dwight Howard is not working.

And while Howard himself might not have demanded a trade, the Rockets have to do what’s best for the organization. If it means trading their All-Star big man to shake things up, that’s exactly what will happen. 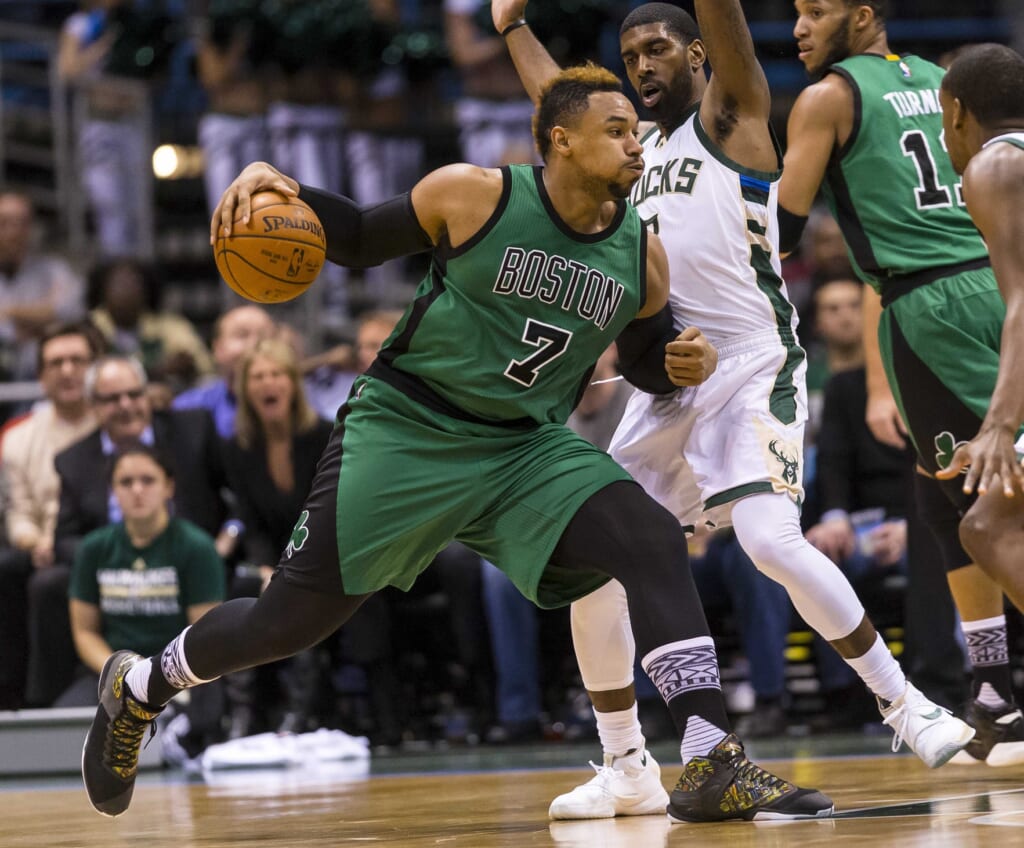 Clearly in the race for a top-three seed in the Eastern Conference, the surprising Celtics could definitely use this big man down the stretch. It’s also important to note that Boston would possess the salary cap flexibility during the summer to re-sign Howard.

As of right now, Tyler Zeller and Jared Sullinger are sharing time at the center position. It’s not the worst tandem in the league, but Boston could definitely use an upgrade here. The two are combining to average 15.2 points and 11.2 rebounds per game.

With as many as four first-round picks in June’s draft, including a likely top-three selection from Brooklyn, the Celtics obviously have the assets to make a trade work here.

It’s all about how Danny Ainge and Co. value Howard. They are not going to give up Brooklyn’s pick, but a combination of their own selection and another previously acquired from Dallas might be an option.

In terms of talent on the roster, Boston doesn’t necessarily have a lot it’s going to want to part with. Potential fillers in order to help Boston take on Howard’s contract are both Amir Johnson and David Lee — potentially even together in the deal.

Though, Houston will likely want to take on Lee’s expiring contract instead of Johnson deal.

Throw in the aforementioned Sullinger and perhaps another youngster (R.J. Hunter), and something could easily get done here that works out for both sides. Of course, that’s all dependent on Boston being willing to give up at least one first rounder in the deal. 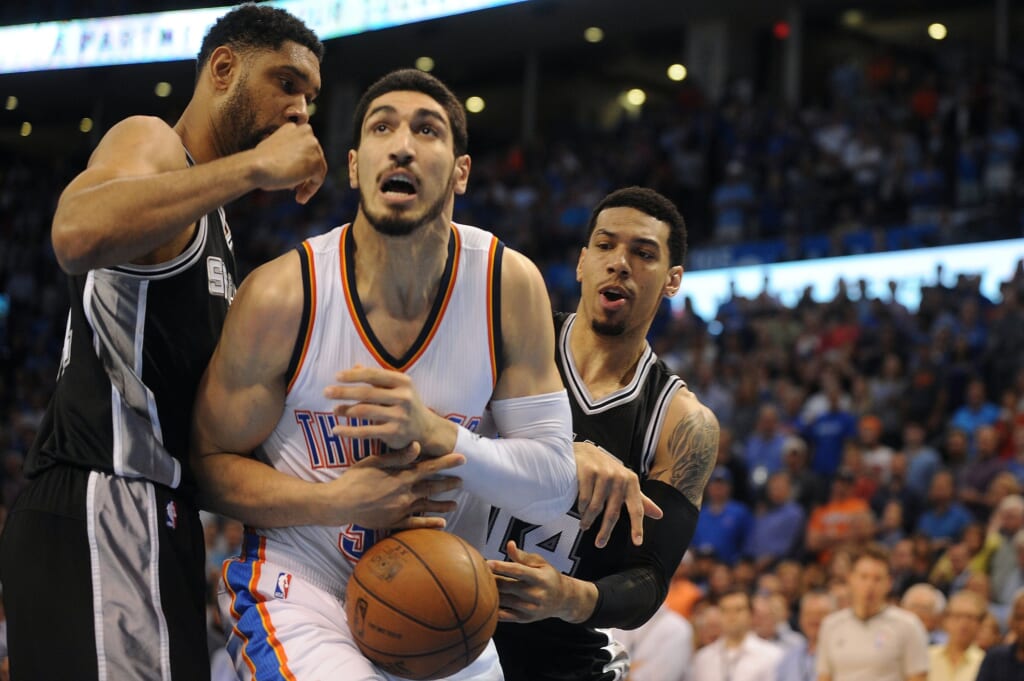 This would be a pure win-now move with the anticipation that Kevin Durant is going to bolt in free agency after this season. Oklahoma City has a trade chip in Enes Kanter that few others possess — a young center with a ton of upside who is under team control for the next three seasons.

The team also boasts another solid young center in Steven Adams, who could very easily end up being the starter next season.

Why not attempt to entice the Rockets in sending Howard to Oklahoma City in exchange for Kanter and maybe a young wing in Cameron Payne? That’s something the Rockets could easily get behind.

Stuck behind Golden State and San Antonio in the Western Conference, it’s highly unlikely that the Thunder are going to be able to come out of the West as they are currently formed.

Adding a defensive presence like Howard would be absolutely huge in any potential series against these two squads.

It also wouldn’t necessarily lead to the conclusion that Durant will be on his way out of town this summer. After all, the Thunder would be picking up an expiring in Howard while sending Kanter’s $16.4 million average salary to Houston. 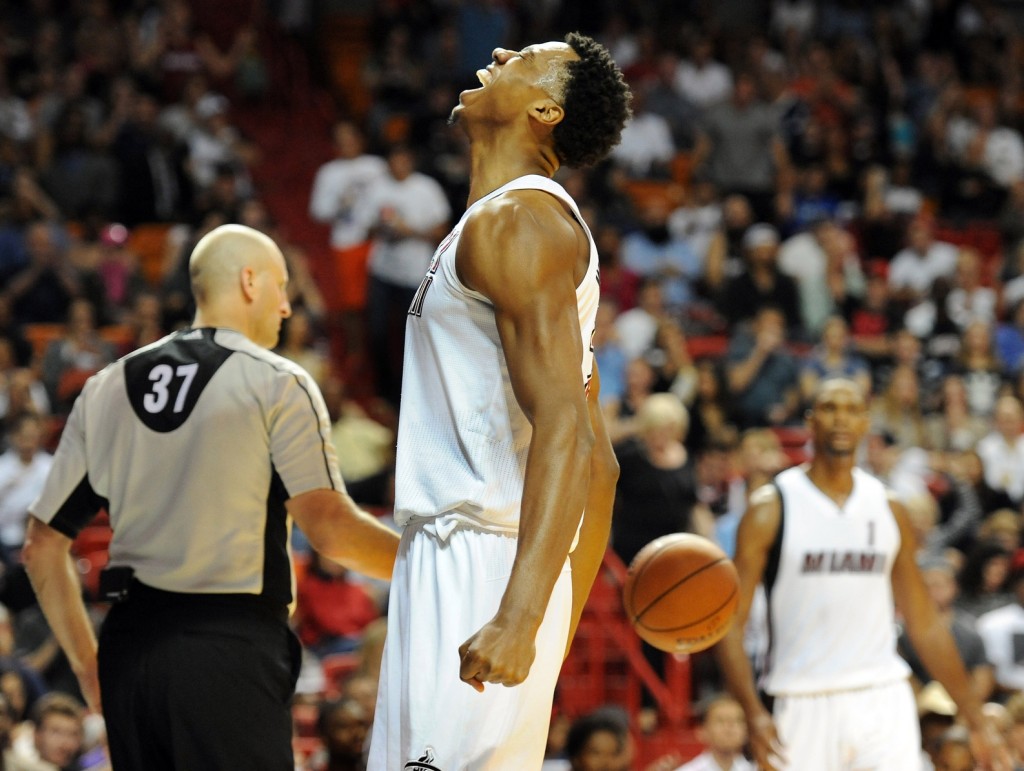 If the Heat could find a way to team Howard up with Dwyane Wade and Chris Bosh, Pat Riley should do his best to make that happen.

Something that seems to be more likely to be conducted in the offseason, this hypothetical trade would have a ton of moving parts, all of which could work out well for both teams.

First off, it would include Houston sending Ty Lawson and Terrence Jones to Miami in the deal to act as fillers. The second domino to drop would be Miami yielding both Goran Dragic and young center Hassan Whiteside to Houston — two players that would fit into the Rockets’ long-term plans.

It’s a highly unlikely scenario, but it’s something that seems to make a ton of sense for both involved parties. Dragic doesn’t seem to be much of a fit in Miami’s slow-it-down offense. Meanwhile, Lawson on the Rockets has been an utter failure since Day 1.

Of course, there are even more moving parts here. Luol Deng, Chris Anderson and Josh McRoberts would have to be moved to Houston to make the salaries match. That would limit Miami’s bench a great deal.

Though, a starting five of Lawson, Wade, Howard, Bosh and Justise Winslow would be all sorts of sexy in South Beach.

Why would the Warriors mess with such a good thing? At 48-4 heading into the All-Star Break, they boast the best record at this stage in the season in the history of the Association.

There is something very few know outside of Oakland. The Warriors made a strong play for Howard prior to him signing with the Rockets during the Summer of 2013. Whether the brass in Golden State has soured on Howard, well that’s another story.

What we do know is that Golden State is in a position to make a play for Howard and upgrade its center position while taking some money off the books for a potential run at Kevin Durant in the summer.

The main piece heading to Houston in any potential Howard deal is All-Defensive Team performer Andrew Bogut, who might actually be the better all-around player than his counterpart on the Rockets right now.

Golden State’s thinking here would be to rid itself of Bogut’s $13.8 million salary for next season while adding a better offensive player in Howard.

From a Rockets perspective, this move would be all about defense. Even with Howard in the mix, Houston is one of the worst defensive teams in the Association. The presence of Bogut would change this in a heart beat.

The Warriors would have to add Jason Thompson as a filler to make the contract work. Houston would likely also demand a first-round pick in return, primarily because it would be taking on an extra $13.8 million in 2016-17 by adding Bogut.