5 keys to the Warriors turning around the Western Conference Finals

The Oklahoma City Thunder shocked the NBA world by defeating the defending champion Golden State Warriors on the road in Game 1 of the Western Conference Finals.

It was a combination of stellar play from Russell Westbrook and some seriously mind-numbing plays from the Warriors that led to this major upset.

With Golden State looking to avoid a 2-0 series deficit Wednesday night in Oakland, here are five things the team must do to turn the series around in quick order.

To those watching the game Monday night, it was absolutely maddening to see Russell Westbrook go off the way he did in the third quarter. Even Thunder fans had to be a bit shocked when Steve Kerr decided to guard Russ with Stephen Curry.

After all, Golden State has one of the best on-ball perimeter defenders in the NBA in the form of Klay Thompson.

Instead, the Warriors put Curry on Westbrook to begin the second half. This came on the heels of Thompson holding Oklahoma City’s top guard to 1-of-8 shooting in the first half.

The end result being Westbrook finding a way to change the game by putting up a postseason high 19 points in the third quarter.

We have absolutely no idea what Kerr and Co. were thinking here. It’s a stunning decision that may have wide-ranging ramifications moving forward in the series.

Known for being one of the best teams in the Association as it relates to making adjustments in between games, the Warriors must make sure that Thompson is on Westbrook the majority of the time moving forward in this series.

"I hate being scored on more than I like to score. Defense is fun for me." –@KlayThompson w/ @realkcalabro & P.J. Carlesimo

These are all indications that the All-Star will do a better job going up against Westbrook than any other member of the Warriors, Curry included.

The Thunder are apparently going to go with Enes Kanter and Steven Adams on the court at the same time a lot in this series. That’s a great strategy for Billy Donovan and Co., as the idea of attempting to match Golden State’s small-ball lineup has proven to be futile for the rest of the league. 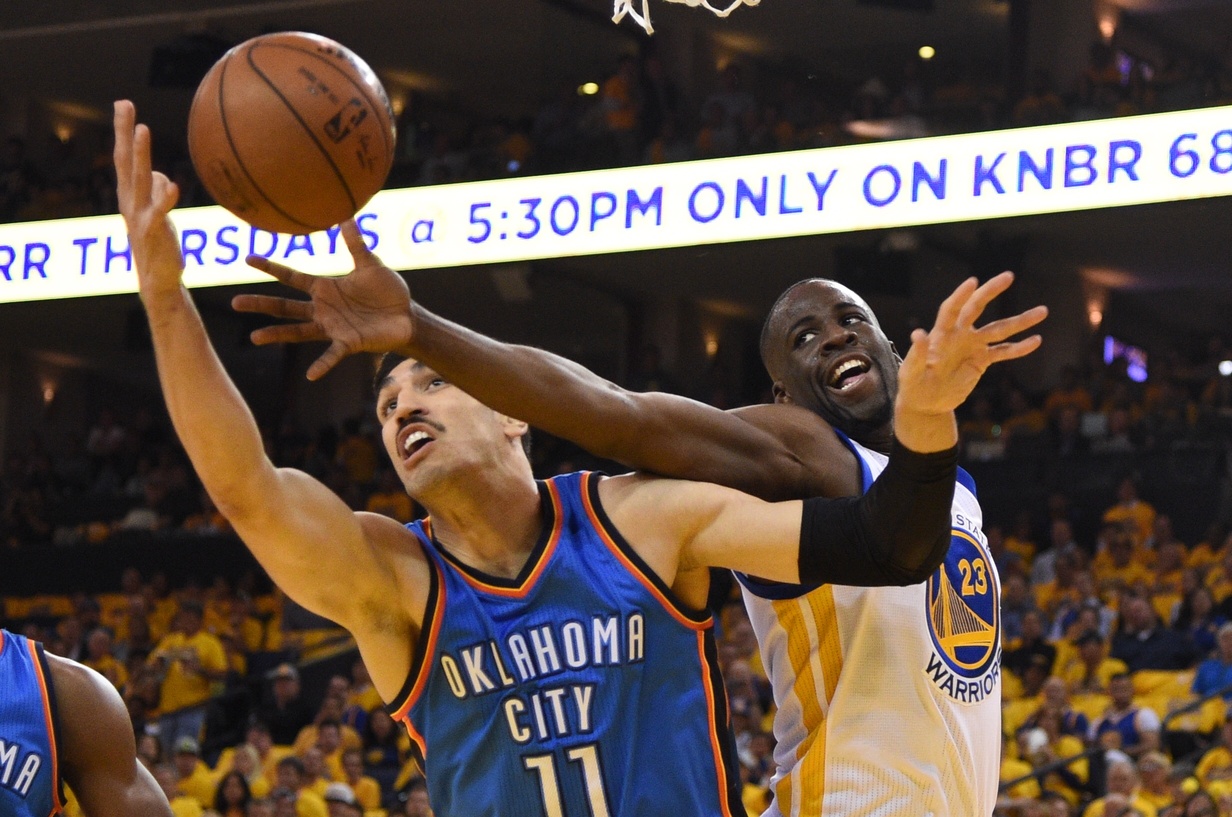 Playing two big’s worked extremely well for the Thunder in Game 1. Kanter and Adams combined for 24 points and 18 boards while finishing plus-21 when on the court together.

The Warriors can’t let this distract them from what they have done well in the past. Play Draymond Green at center, have Harrison Barnes move to the four and put Andre Iguodala up against Kevin Durant.

There are a couple things this does. It enables Thompson to still guard Westbrook while putting an elite-level defender on Durant.

This lineup will also give Golden State the athletic advantage with Barnes and Green going up against the two big’s. Rebounding will surely be an issue here, but both of those guys have proven themselves capable of going hard at the boards.

In reality, it gives Golden State the opportunity to use their athleticism out on the perimeter. If Adams and Kanter go out beyond the restricted area to contest a shot, crisp off-ball plays will be Oklahoma City’s undoing.

Golden State did rack up 26 assists on 40 made field goals in Game 1. Most teams would take this in a heartbeat. Though, the ball movement took a major hit in the second half, a span that saw Oklahoma City outscore the Warriors by 19 points. Overall, Golden State put up just 11 assists after the break.

For the Warriors, this all starts with Green in the frontcourt. He had just four assists in Game 1 after averaging over seven in the first 10 games of the playoffs.

Some of this could be fixed with Green playing the five against a center. His ability to distribute from the low-post cannot be denied.

Though, we can’t place all the blame for Golden State’s lackluster offensive performance in Game 1 on Green. The primary issue here was a lack of movement off the ball.

Too often, especially in the second half, Warriors players found themselves just standing around with isolation becoming the biggest element of the offense. That’s definitely not Warriors basketball.

Crisp off-ball movement will lead to more spacing. In the process, ball movement itself will increase a great deal.

It’s also going to be important for Stephen Curry to avoid that turnover bug. He turned the ball over a ridiculous seven times in Game 1. That simply can’t happen moving forward.

4. Force someone other than Russ and Durant to beat you

This goes to scheme. If Golden State has Thompson on Westbrook and Iggy on Durant, it will force other members of the Thunder to pick up the slack. Thompson and Iggy are just too good on the defensive end to let those two All-Stars go off.

Whether it’s Curry guarding the combination of Andre Roberson and Dion Waiters or Green and Barnes going up against the big’s inside, that’s where the Warriors need to make Oklahoma City beat them.

The Warriors will be perfectly fine is Roberson is posting up Curry. That’s not going to scare anyone in Oakland. On the other hand, drawing up plays for Kanter and Adams isn’t going to be a recipe for success for Oklahoma City, especially with Westbrook and Durant on the court.

Could say fundamentals. More than anything, Golden State’s biggest issue in Game 1 was its inability to play the same type of game we have now seen over the past two seasons.

Crisp ball movement on offense, solid perimeter defense with elite-level secondary presences on the interior. Shooting at a record clip from the outside. Coaching at a higher clip than the opponent.

The Warriors did none of this in Game 1, which led to a rather shocking loss to the Thunder.

By no means is this an indication that the team will or should panic. The Warriors have been here before. They fell down 2-1 to the Memphis Grizzlies in the Western Conference Semifinals last season, only to win the final three games.

Then in the Finals against Cleveland, the Warriors also won the final three games to overcome a 2-1 series deficit.

Heading into Game 2, the Warriors still have not lost two consecutive games all season. They boast a 45-3 record at home, playoffs included. There’s going to be no panic from the team come Wednesday night.

This doesn’t mean that the Warriors can sit back and play the slightly above-average basketball we have seen from them for the majority of the postseason. If that happens, they will face the real possibility of falling down 2-0 in this best-of-seven.