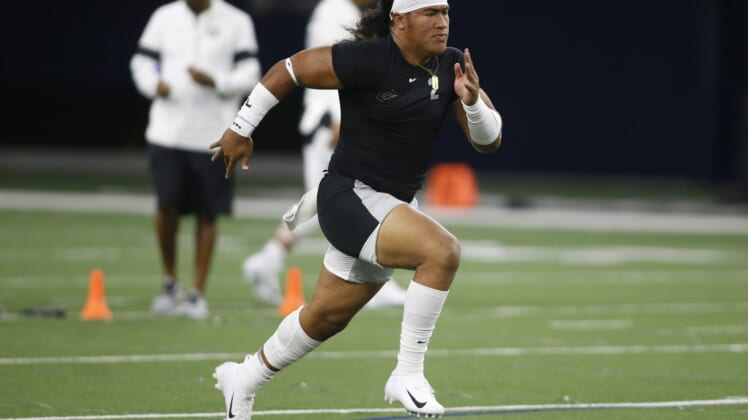 The 2020 recruiting class is in the books, and it’s clear there are a handful of freshmen who have both the talent and skillset to make an immediate impact.

We’re highlighting five freshmen in particular who are set up for instant success. These young men will burst onto the college football scene in 2020 and become stars for their respective universities.

The Buckeyes are loaded with talent on offense, and a couple of stars from last year’s squad are returning. Big-play specialist Chris Olave is coming back, along with Garrett Wilson. But we’re expecting quarterback Justin Fields to take a big leap forward in his development in Year 2 with Ryan Day, and one of the biggest beneficiaries of this could be true freshman Julian Fleming.

A five-star recruit many believe is the best overall player coming into college football in 2020. Fleming is a red-zone monster who already uses his 6-foot-3 frame beautifully to dominate cornerbacks off the line of scrimmage. He’s a polished route runner and has a knack for winning 50-50 balls, which will make him a trusted target in short order.

Many are excited about Oregon’s defense in 2020, which has a chance to be even better than it was last year. Even before adding talent in the 2020 recruiting class, the Ducks were going to be great with stars like Kayvon Thibodeaux, Jordon Scott, Deommodore Lenoir, Thomas Graham, Jr. and Jevon Holland all returning. And the bonkers thing about all that is that freshman linebacker Noah Sewell may end up being the best of the bunch in short order.

This five-star linebacker (No. 2 linebacker, No. 13 overall in 2020, per 247 Sports) is the highest-ranked linebacker in Oregon history. This young man is huge, at 6-foot-2 and 266 pounds. Yet he has nimble feet and moves with a quickness that’s rare for a player of his size. He’s going to elevate this defense to another level in 2020.

It was pretty stunning when Maryland, which is coming off a 3-9 campaign in 2019, landed five-star wide receiver Rakim Jarrett. After all, Jarrett had previously committed to LSU, which is a national powerhouse and is known for producing NFL-caliber receivers. So when he flipped his commitment to the Terps, many were taken aback.

Jarrett isn’t particularly big, at 6-foot and 208 pounds, but he’s a physical receiver with outstanding strength and quickness who can line up all over the field. He’ll become one of Maryland’s top offensive weapons in short order and has a chance to put up jaw-dropping stats as a true freshman playing for the Terps in 2020.

Is there any doubt that LSU is still DB U these days? The program has produced some of the NFL’s elite playmakers, and nobody should be surprised if LSU freshman Elias Ricks ends up following in the footsteps of guys like Patrick Peterson and Tyrann Mathieu.

The Tigers are bringing back starting cornerback Derek Stingley, who has one side locked down heading into the 2020 season. Given the talent Ricks brings to the table, not to mention this kid is already physically ready to dominate at the collegiate level at 6-foot-2 and 192 pounds, we expect him to quickly assume the duties Kristian Fulton was responsible for last season.

Mac Jones may win the starting job this summer due to his experience running Steve Sarkisian’s offense. He did a fantastic job last season when Tua Tagovailoa suffered a season-ending hip injury. But there is no doubt that five-star freshman Bryce Young will push him for that role, and given the tools he possesses it won’t be shocking if Young forces his way onto the field in 2020.

“I think Bryce Young is a kid that is capable of coming in as a true freshman, early enrollee at Alabama and winning that starting job,” Barton Simmons of 247Sports said recently.

It’s easy to see why many hold the same opinion.

Young will have his work cut out to win the starting job, to be sure. Jones isn’t the only guy he’ll have to beat. Taulia Tagovailoa’s there, too, and he showed promise last season with plays like this.

But in the end, Young’s supreme talent could make him the next Tua Tagovailoa for the ‘Bama program.