Game 1 of the 2021 NBA Finals between the Milwaukee Bucks and Phoenix Suns tips off on Tuesday, and it’s worth digging into the biggest keys in this matchup to determine who will lift the Larry O’Brien Trophy.

Here’s a look at four major factors that should go a long way in determining who emerges victories from this epic Finals series.

Will Giannis play in the Finals?

The Suns’ brightest young star, Devin Booker, is battling through a broken nose, but he won’t be missing any time going into the Finals. It’s a different story for Giannis Antetokounmpo.

After suffering a hyperextended knee injury in the Conference Finals, Giannis’ status is unclear entering Game 1. While it was feared initially that the Greek Freak had suffered a torn ACL, somehow he avoided that catastrophic setback.

Even without Giannis on the floor, Milwaukee managed to close out the upstart Atlanta Hawks. Depending on if or when the two-time league MVP returns, the Bucks will need to adjust their playing style, which will be quite difficult to do under the brightest lights in the sport.

If things are going well for Milwaukee and the team wins, say, the series opener or two of the first three, and Giannis is ready to return, what then? Quite a difficult situation for head coach Mike Budenholzer to deal with however it manifests.

With averages of 16.2 points and 11.8 rebounds, Suns center Deandre Ayton has blossomed before the basketball world’s eyes as a potential superstar during the NBA playoffs.

Ayton is shooting over 70% from the floor, which is unprecedented from a player this deep in the postseason. He’s altered his role from game to game as Phoenix has needed him, and seamlessly fits in to what head coach Monty Williams wants to do. 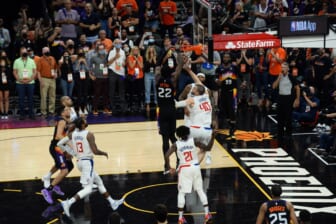 Speaking of changing up one’s role, who’s done that in more underrated fashion than Brook Lopez? He was a traditional, throwback big man to begin his NBA career that could mainly be counted on for scoring and rebounding. Now? He’s evolved into an excellent 3-point shooter and exceptional rim protector.

After feasting at times on the Los Angeles Clippers’ smaller lineups, Ayton’s life in the paint is going to be harder against the likes of Lopez. Plus, the Bucks’ veteran will force Ayton out to the perimeter more often because of his ability to space the floor and shoot from distance.

It’s definitely a unique assignment for Ayton, but no matter what’s been asked of him in the playoffs, he’s gotten the job done.

It’s probably quite surprising to see Chris Paul go unmentioned until this late in a piece about the NBA Finals.

CP3’s pursuit of a long-awaited championship is indubitably the biggest individual storyline as far as individual legacies are concerned in the 2021 NBA Finals, but it’ll be Paul’s supporting cast that determines whether the Suns win or not.

When Paul was out for the first two games of the Conference Finals, Cameron Payne stepped in and delivered against the Clippers, particularly in Game 2 of that series. Payne dropped 29 points in a 104-103 Phoenix victory. 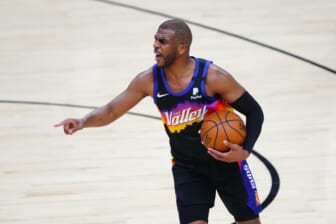 Dealing with an injury to his right shooting hand, the 36-year-old Paul is doing his best to gut through yet another playoff ailment. Now, he’s going to face his toughest test yet, being guarded often by the NBA’s elite on-ball defender in Jrue Holiday.

With Holiday hounding him, and mercifully switching onto Booker on occasion, that’s bound to take a toll on Paul as the Finals go on. That’s where Payne must pick up the slack and provide a spark off the bench whenever Holiday is resting.

Payne is capable of erupting, and might be the single biggest X-factor on either team. Nothing was too big for him against the Clippers. Let’s see how he fares on an even bigger platform.

Jae Crowder and Mikal Bridges stepping up on D

Again, we’re going with more of the Suns’ role players. When Jae Crowder or Mikal Bridges are fully on as shooters, Phoenix is that much harder to stop. The thing is, Crowder is often wildly inconsistent, and Bridges isn’t as willing to take his shots with the likes of Booker, Paul and Ayton on the team despite his excellent efficiency.

Where Crowder and Bridges need to concentrate most of their attention is on the defensive end. The Suns definitely play a smaller lineup, with the 6-foot-6 Crowder often at the 4. If and when Giannis returns, it’s up to these two swingmen to pick up the slack.

Oh, and Khris Middleton is no easy defensive assignment, either. Crowder and Bridges have the play strength, length and lateral quickness to make life difficult for Middleton. 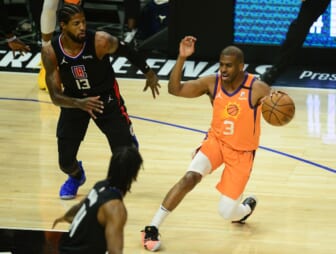 In two meetings with the Suns during the regular season, Middleton shot 43.6% from the field and 33.3% from 3-point range Not spectacular, really, and you’d expect those shooting splits to go down with the NBA Finals intensity turned to 11.

Much of how successful Crowder and Bridges are defensively likely boils down to how healthy Giannis is. That said, they’re pivotal to the 2021 NBA Finals’ outcome.

This series is a watershed moment for both smaller-market franchises. Fittingly, it’ll be about which unheralded players step up or not that’ll swing the outcome.