Now through two games of the 2015 NBA Finals, we are starting to notice some trends. In Game 2, the Cleveland Cavaliers did an outstanding job throwing the Golden State Warriors offense off balance by putting a tremendous amount of pressure on the ball. Cleveland’s success was also aided in the fact that Stephen Curry had one of the worst shooting performances of his career.

On the other end of the court, LeBron James has played a total of 96 minutes in two games. That’s simply not sustainable if the Cavaliers want to get the most out of him moving forward in the series.

It’s safe to assume the Warriors won’t win Game 3 if their MVP shoots 5-of-23 from the field again. Even a couple more baskets in Game 2, and Golden State takes a 2-0 series lead into Tuesday night. The biggest question here is whether Curry just had an off night or if Matthew Dellavedova played lock-down defense on the point guard.

Watching tape of Game 2, it seems that Curry’s struggles were a combination of both. He missed multiple open shots, including at least four three-point attempts that weren’t necessarily hotly contested. Curry has the athletic advantage over Dellavedova here, so it stands to reason that he will find more open shots on Tuesday night. If so, the Cavaliers can’t expect him to miss at the rate he missed on Sunday night. Instead, the team needs to confuse Curry with switches, keep him off his game and force rushed long-range shot attempts. If that doesn’t happen, the MVP will rebound big time.

2. Get LeBron Some Rest

LeBron James has played all but 10 minutes of the first two games of the #NBAFinals pic.twitter.com/hPPZ42Q9Bi

King James averaged 36.1 minutes per game during the regular season. Thus far in the Finals, he’s at an average of 48 minutes per game. Needless to say, it would be foolish to think that the four-time NBA MVP can keep up this torrid pace. Head coach David Blatt and company must find ways to rest James without letting the game get out of hand. He’s their only real shot at winning the series. Simply put, if James starts to struggle because of exhaustion as the series progresses, the Warriors will end up hoisting the trophy.

There are a couple ways Cleveland might be able to get away with giving James some rest in Game 2.

The first option would be to play James Jones more in his absence. As we saw in Game 2, Jones does a good job of stretching the court. This will give the likes of Iman Shumpert and J.R. Smith some open shots.

The other option here is to pull a Steve Kerr. That is to say, give James required rest that’s etched into stone prior to the game. No matter where a particular game is trending, the Warriors sit Stephen Curry at the start of the second and fourth quarters. Maybe match Golden State by sitting James at the same time, and see if the rest of Cleveland’s rotation can overcome a deep Warriors bench. Either way, James can’t be asked to play 45 minutes in this one. He needs to be closer to the 40-minute mark when all is said and done. 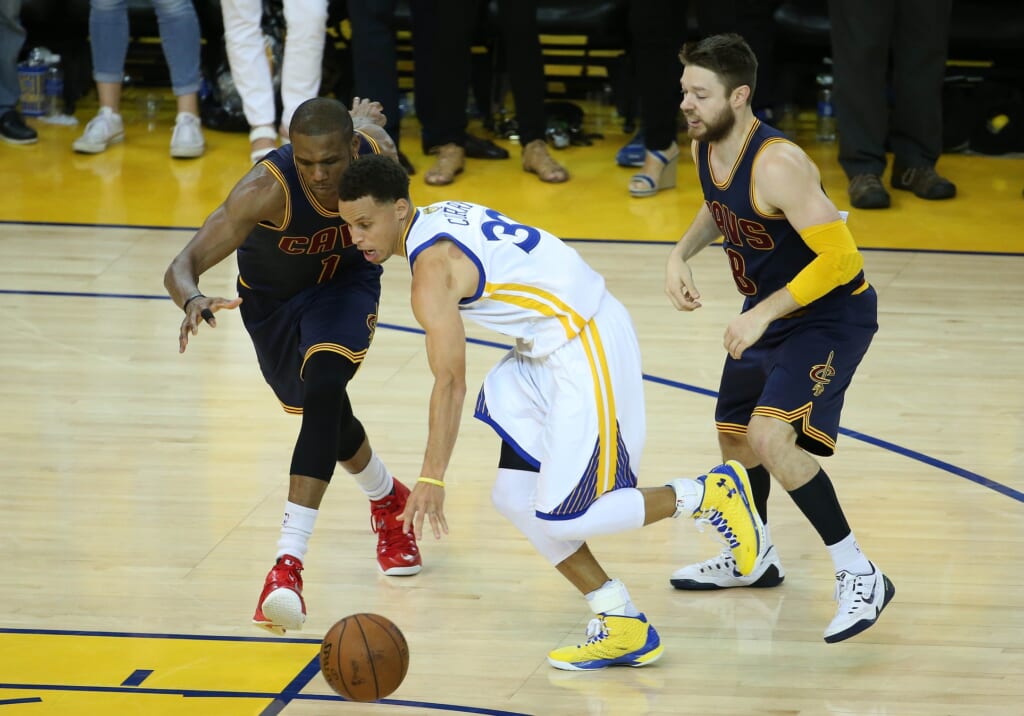 Courtesy of USA Today Sports: For the Warriors, it’s all about ball movement.

This goes without saying, but it’s more important for the road team in Game 3. Cleveland will likely go iso with James a vast majority of the time. If that’s the case, it’s only going to take the two-time champion to execute to the best of his ability. Through two games, that’s exactly what has happened.

It’s more about execution on the Warriors’ side, especially on offense. Here’s a team that averaged 26 assists per game in the playoffs heading into Sunday’s loss. Unfortunately for the Western Conference champs, they tallied just 16 assists in the loss. It’s all about ball movement here. More so than under Mark Jackson, the Warriors’ offense relies a great deal on movement from its players, coming off screens, and consistently seeing the ball find the hands of at least three players per possession. This obviously didn’t happen in Game 2.

For the Cavaliers’ part, they did a great job stopping that movement on Sunday. They put a tremendous amount of pressure on the ball, kept Golden State’s big men from finding passing lanes out to the perimeter, and forced the Warriors’ hand throughout the game. If this happens on Tuesday, Cleveland will come out on top.