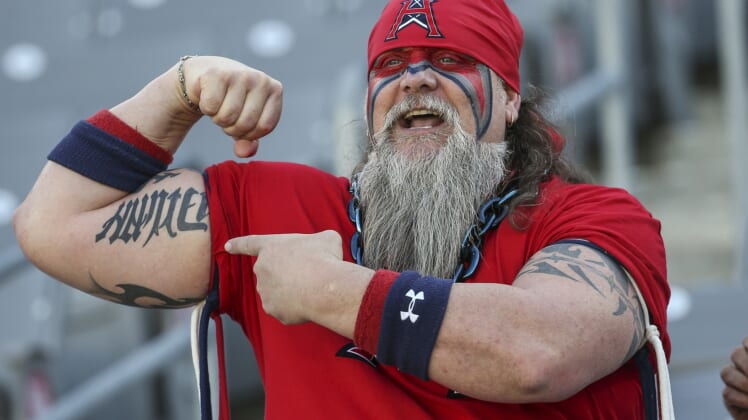 The 2019 NFL season is over, but another helping of football is right around the corner with the launch of the XFL. Now with the schedule and rosters set and kickoff closing in, the outlook for the 2020 XFL season is coming into shape.

The eight-team league launches on Feb. 8 and there will be plenty for fans to enjoy. From marquee names making plays on the field to iconic head coaches calling plays from the sidelines, the possibilities for the 2020 XFL season are endless. Of course, the league’s innovative rules and style will make the action even more compelling for fans.

There can be challenges in ranking teams at the very start of a new league. We don’t yet know how teams will execute their plans and which players will thrive as part of this new league. When we look at each coaching staff and the talent assembled on each roster, it becomes clearer what teams deserve to be considered the favorites.

Now let’s take a look at our inaugural XFL power rankings before the upcoming 2020 season.

While many of the XFL teams will be carried this season by quarterback play, Dragons head coach Jim Zorn clearly wants his team to win on the ground. Running backs Kenneth Farrow and Trey Williams will carry the offense, while quarterback Brandon Silvers picks up the slack.

The Dragons just don’t seem to be great at any key position. Silvers is behind his XFL peers in terms of pure talent and Seattle didn’t exactly find real game changers at running back either. We haven’t exactly seen offensive coordinator Mike Riley’s offense impress at the collegiate or professional level, either. There’s some former NFL talent on defense, but the XFL set up its rules to create exciting football and the Dragons’ offense will be more smoke than fire.

A quarterback competition could be brewing in New York. While former Penn State and Oakland Raiders quarterback Matt McGloin is expected to start, the recent addition of Luis Perez makes things interesting.

If McGloin struggles with his accuracy, which was a problem in college, New York could turn to Perez. He looked like a potential star for a few weeks in the AAF, but dealt with inconsistency before the league shut down. Either quarterback will have some nice weapons to work with in DeAngelo Yancey and Mekale McKay. The Guardians’ defense might ultimately be what carries this team, but we just don’t know if it will be enough to overcome a pedestrian offense.

We’re excited to see Christine Michael get a chance to be the featured running back. He averaged 4.3 yards per carry in the NFL with 1,089 yards and seven touchdowns on 256 carries across seven seasons. He’s going to form an excellent 1-2 punch with former NFL running back Matt Jones.

It’s the rest of this team that feels underwhelming. Jordan Ta’amu had one strong year at Ole Miss, but he’ll now face competition during the season from former Mississippi State quarterback Nick Fitzgerald. St. Louis also had to hire a new offensive coordinator just weeks before the regular season. Pair that with an underwhelming receiving corps and this feels like an offense that will struggle to beat top teams.

A team we were really excited about when things began, but then injuries struck the Roughnecks. The loss of Jalen Saunders takes an exciting weapon out of this offense, especially given his familiarity with head coach June Jones’ system.

Fortunately, quarterback Connor Cook is healthy and can take advantage of star receiver Sammie Coates. Coates and Cook aren’t the only big-name players in Jones’ offense, running back Andre Williams should eat as well. If Houston is going to contend for a championship, though, the defense must step up and Cook needs to play like he did at Michigan State.

The Vipers are the wild card of the XFL. Aaron Murray doesn’t exactly inspire confidence at quarterback, but backup Quinton Flowers is the most exciting two-way threat in the league. If Murray fails to impress, head coach Marc Trestman could tailor his offense around Flowers and unleash chaos on the XFL.

Trestman will also look to unleash tight end Nick Truesdell, who the Vipers selected with the No. 5 pick. Tampa Bay will be a team every football fan needs to watch in the XFL. The loss of Antonio Callaway will be a blow for this offense, so let’s hope someone else steps up.

The Wildcats head into the 2020 season ready to roll with quarterback Josh Johnson. He’s the most experienced player in the league and has even had recent success in the NFL. He’ll also benefit from a supporting cast of receivers Nelson Spruce, who finished with 3,347 receiving yards at Colorado, and K.D. Cannon, who lit up the field at Baylor with his explosiveness.

Offensive coordinator Norm Chow will make this offense a treat for football fans in Los Angeles to watch. While he focuses on the offense, head coach Winston Moss will run this hard-nosed defense. A season-opening test against the Roughnecks will be one of the most interesting games to watch in Week 1 and could help shape the Western Conference early.

Dallas finally has a team that can win a championship. All jokes at the Cowboys’ expense aside, no XFL team offers more intrigue than the Renegades. Bob Stoops is a legendary coach with an offense that will delight fans in Dallas. Better yet, he’ll have Landry Jones running his offense once again with former NFL running back Cameron Artis-Payne sharing the backfield.

Jones should thrive in the Air-Raid attack and put receivers Jazz Ferguson and Jeff Badet in position to put up great numbers. Dallas’ offense will make fans want to bring out the popcorn, but this defense can deliver too. The Renegades’ secondary offers a nice mix of experience and talent, which will be critical against some of the top quarterbacks. When you factor in coaching and the skill Dallas offers on both sides of the ball, it’s clear why this is the team to beat.