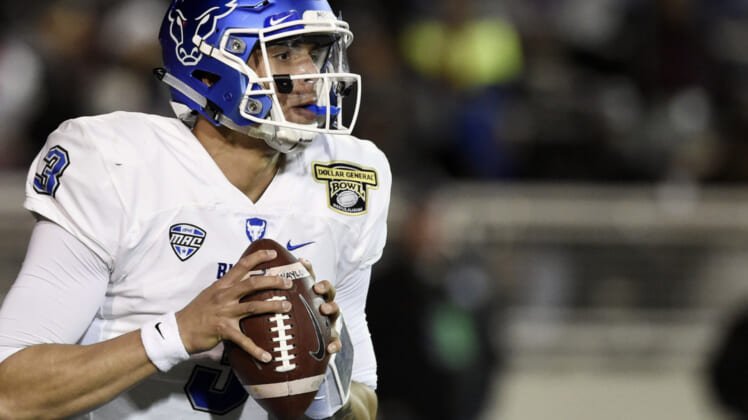 The 2019 NFL Draft feels even more like a game of craps than its recent predecessors with no consensus top quarterback and other big risks throughout.

Will the Arizona Cardinals take a gamble and draft Kyler Murray? Will a top-10 team take a risk on an incredible talent and get over Montez Sweat’s heart condition?

Those are among the 10 top risks worth taking ahead of the draft.

It’s always a gamble selecting a quarterback atop the draft. For Arizona, which traded up for Josh Rosen last year, the risk is magnified all the more. Yet it’s impossible to deny the allure of landing a faster, more dynamic Russell Wilson-type quarterback.

Kliff Kingsbury could do so much more with Murray than he can with Rosen. The Heisman Trophy winner is deadly from the pocket despite his diminutive stature, and he’s incredible as a scrambling quarterback — both running and throwing on the run.

As Jon Gruden so astutely pointed out last year, it’s hard to find great pass rushers. Allen was extremely effective last year racking up 17 sacks and five forced fumbles for Kentucky. The past three seasons, he tallied 31 sacks and 11 forced fumbles. So, clearly Allen is a playmaker.

The big issue that has made him such a polarizing figure in the draft community is that Allen’s repertoire of pass-rushing moves is limited. He relies too much on quickness and doesn’t have a spin move to speak of. Yet the raw ability Allen possesses can be molded. He’s well worth the risk, even this early in the draft.

The risk with Taylor is that he is not an elite athlete, and that he broke down mechanically against top competition last year. He’s a huge man at 6-foot-5 and 334 pounds, and he plays with outstanding power — much like Trent Brown does. He could take some time to develop. Assuming he does, Taylor is well worth the risk.

Until the Kyler Murray hype train departed the station at light speed, many thought Haskins could end up being selected atop the draft. He had a prolific 2018 campaign for the Buckeyes, passing for 4,831 yards and 50 touchdowns — both Big Ten records.

Of course, the risk attached to Haskins is that he was a starter for just one season and has very little real experience against top competition. Additionally, he really struggled with accuracy when forced to move laterally. The good news in this scenario is that New York is seemingly committed to Eli Manning at least for another season, so Haskins wouldn’t be thrown directly into the fire.

Sweat was the talk of the 2019 NFL Scouting Combine for the workout he produced. Truly, it was legendary. The 6-foot-6, 260-pound edge rusher ran his 40 in 4.41 seconds and showed excellent quickness in the 3-cone drill. On top of his production (53 tackles, 14 for loss, and a team-high 11.5 sacks last year), Sweat’s stock was skyrocketing.

The risk was exposed at a later date. Sweat has a heart condition that he’s played through, and some teams have reportedly taken him off their draft boards completely because of it. The Lions, who need another pass rusher, hopefully are not one of them.

Washington trades up to No. 10 for Drew Lock

Denver was long thought to be hot for Lock. However, a recent report indicated the team would like to trade down. Additionally, Joe Flacco has made it clear he doesn’t want any real competition for the starting job this year.

Washington desperately needs to find its franchise quarterback. Lock has traits that teams covet, including prototypical size (6-foot-4 and 228 pounds) and a rocket arm. He’s a player who could change the fortunes of a franchise. Despite concerns about accuracy and decision making, he’s a player the Redskins need to risk it all to acquire.

The Packers have been doing some work scouting both Lock and Jones ahead of the 2019 NFL Draft. Recently, we argued that they need to find Aaron Rodgers’ replacement now, before it’s too late.

It may seem counterintuitive for a team that has an elite quarterback and championship aspirations to use a first-round pick on another quarterback. Yet using this pick to draft Jones — a player who could become a star with some seasoning — could usher in another golden era for Green Bay when Rodgers is finished with his career.

Houston has championship aspirations. It also has a dire need for offensive linemen, so it makes sense that the Texans could use this pick for a left tackle like Dalton Risner. However, Houston also plays in a conference that features some dynamic slot receivers. And the team to beat — the New England Patriots — features an offense that constantly cuts you with short, quick passes.

Baker is the best cover corner in the draft. However, he isn’t particularly fast (4.52 second 40) and isn’t as long as other cornerbacks in the draft. Typically, teams avoid cornerbacks who don’t run fast in the first round. Houston should break with tradition here and select this ball-hawking bulldog of a cornerback.

Oakland might be eyeing the playoffs this season, but honestly this team still has too many holes to fill. With an eye toward the move to Las Vegas, Oakland should take a risk on a dominant player who might not play a single down in 2019.

Simmons would have challenged Quinnen Williams out of Alabama as the first defensive tackle in the draft if he hadn’t tore his ACL. Thankfully, his recovery is going well. The Raiders would be making a smart move to draft him late in Round 1, then keep him out of action for the entire season so he’s ready to rock and roll in 2020.

One of the biggest boom-or-bust players in the draft, Jackson is the definition of a project. This raw prospect has the potential to turn into pure gold once refined — he’s bigger than Cam Newton, has a tremendously strong arm, and learned how to play quarterback by watching Tom Brady videos on YouTube. Essentially, he’s a more athletic version of Josh Allen, who went to Buffalo at No. 8 last year.

Most mock drafts have Jackson being taken late on Day 2. Yet New England would be smart to roll the dice at the end of the first round. Assuming he continues his meteoric rise, the Patriots would have its next star quarterback to take over whenever Brady retires.