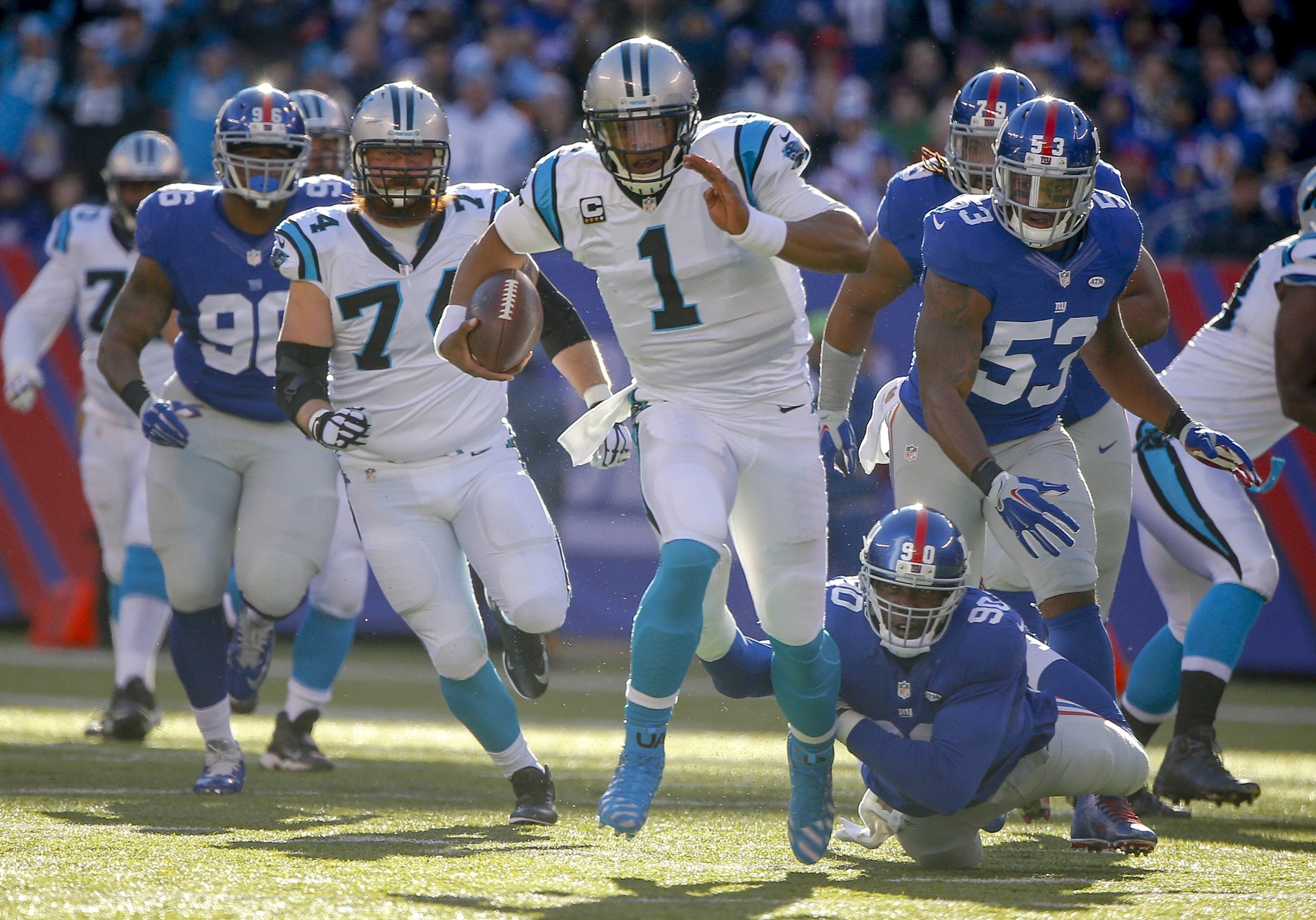 The 2015 NFL season is officially on the books. Along the course of the 16-game journey, many individual and team achievements led to some record-setting action.

From quarterback-rattling sacks, to amazing wide receiver accomplishments to a team coming from a severe deficit to make it to the playoffs, here are some notable NFL records that were achieved or broken in 2015.

In 2015, New York Giants wide receiver Odell Beckham Jr. did quite the opposite of fall victim to the classic sophomore slump.

Debunking the Madden Curse as well, Beckham tallied 96 catches for 1,450 yards and 13 touchdowns. If only he had minded his P’s and Q’s in Week 15 and not gotten suspended for a game, Beckham would have likely increased these numbers.

As it stands, the mighty OBJ did enough in his first two years to surpass the legendary Randy Moss for recording the most receiving yards in the first two career seasons of one’s NFL career.

At this point in his young career, the sky is definitely the limit for Beckham and those fancy, ambidextrous hands he is developing. Even though the New York Jets fell short of making it to the playoffs, it was not for any lack of effort from Brandon Marshall and Eric Decker.

The duo scored a combined 26 touchdowns over the 2015 season. Furthermore, there were nine games when both receivers scored, which breaks the record held by Cris Carter and Randy Moss from the 1998 Minnesota Vikings.

Marshall has thrived in his first season with the Jets, making us wonder what on earth the Chicago Bears were thinking when they shipped him away for a late-round draft pick (he is still bitter about the entire thing). His 1,502 receiving yards falls just six yards shy of his 2012 career-high and his 14 touchdowns marks his career-high in scoring.

For Decker, he finished 2015 with 1,027 yards and 12 touchdowns in 15 games, making he and Marshall the NFL’s most potent wide receiving combo from the 2015 season.

In Week 17, Carolina Panthers stud quarterback Cam Newton needed two rushing touchdowns to tie the record held by Hall of Famer Steve Young, who has 43 rushing scores on the books.

Going beyond the call of duty, Newton delivered two rushing touchdowns in combination with two passing scores against the Tampa Bay Buccaneers in a 38-10 blowout win.

Considering Newton is only 26-years old, we can bet there are many more rushing touchdowns to be had which will have other mobile quarterbacks chasing after his amazing record some day.

Newton also set another record, showing off his dual-threat capabilities.

With 35 passing TDs and 10 rushing TDs, Cam Newton is the only player in NFL history with at least 30 pass TDs/10 rush TDs in same season.

The NFC champion Panthers posted a 15-1 record-breaking season thanks in large part to Newton’s weekly exploits.

Prater departs the season having completed 22-of-24 field goal attempts (91.7 percent). This was his second-best year of his career in this regard.

The record for the longest NFL field goal, which is for 64 yards, is held by none other than Prater himself. He accomplished this task on December 8, 2013 when he played for the Denver Broncos.

They come from different teams, but together Julio Jones and Antonio Brown made history in 2015.

Julio Jones & Antonio Brown combined for the most single-season receiving yards by a WR duo in NFL history (3,705) pic.twitter.com/UiYdgz4K5u

With the 2015 season being extremely kind to the wide receiver position, both Jones and Brown reaped the benefits.

Jones’ 1,871 receiving yards and Brown’s 1,834 make for the first time in NFL history that two wide receivers have surpassed the 1,800-yard mark. Coincidentally, both receivers each had 136 receptions as well.

Their combined yardage of 3,705 breaks the record previously held by Jerry Rice and Isaac Bruce, who combined for a total of 3,629 yards in 1995.

Jones is now ranked second all time in single-season receiving yards behind Calvin Johnson, who totaled 1,964 in 2012. Unfortunately for Jones, his season is over while Brown will trudge ahead to face the Cincinnati Bengals for an AFC wild-card showdown.

Needless to say, both wideouts will be surely be No. 1 targets in fantasy football next season with these incredible stat lines etched in our heads. The Jacksonville Jaguars didn’t finish 2015 very well, but that didn’t stop quarterback Blake Bortles from completing the season with a new franchise record.

When Bortles added 239 passing yards in Sunday’s game against the Houston Texans, he finished the year with a total of 4,428 passing yards, surpassing Mark Brunell’s all-time passing yard record of 4,367.

Bortles also added 35 touchdowns for the season, along with setting the record for the most pass completions (355) as well for the Jaguars.

Much of Bortles’ success has to do with young wide receivers Allen Robinson and Allen Hurns. Robinson, who tallied 1,400 yards and 14 touchdowns, and Hurns, who recorded 1,031 yards and 10 scores, also made a little history themselves.

As Bortles heads into the offseason, he can take satisfaction in the fact that he has improved immensely from his 2014 rookie campaign that resulted in 2,908 yards, 11 touchdowns and 17 interceptions.

The Seattle Seahawks chose well when they selected Kansas State’s Tyler Lockett in the third round of the 2015 NFL Draft.

Lockett has since set a Seahawks rookie record with his 1,913 all-purpose yards for the 2015 season. Furthermore, he set a team record for punt return yards by halftime in Seattle’s victory over the Arizona Cardinals in Week 17, finishing the day at 139.

Other highlights of Lockett’s successful rookie season include two games when he scored a pair of receiving touchdowns in Weeks 11 and 14.

We’ll see Lockett and the Seahawks next when they face the Minnesota Vikings at TCF Bank Stadium for the wild-card round next weekend. While the Houston Texans dominated the AFC South for the first time in four years, making their way to the playoffs, defensive end J.J. Watt and linebacker Whitney Mercilus helped lead the Texans to a franchise record-high 45 sacks.

Watt tallied 17.5 and Mercilus came up with 12. We might also mention that Watt’s 17.5 sacks were the most in the NFL, with Oakland Raiders defensive end Khalil Mack ranking second (15).

The next victim on their list as they head to the postseason would be Kansas City Chiefs quarterback Alex Smith. Smith was unfortunately sacked 45 times this year, which was the third-most of all NFL quarterbacks in 2015.

Talk about a perfect match.

On the offensive side of the field for the Houston Texans, third-year wide receiver DeAndre Hopkins was taking care of his own record-breaking business.

During the not-so-ideal course of working with multiple Texans quarterbacks this season, Hopkins still managed 111 catches for 1,521 yards and a franchise-record 11 touchdowns. Hopkins’ 192 targets also has him ranked as the No. 3 targeted player behind Julio Jones and Antonio Brown.

Furthermore, Hopkins, at the young age of just 23, joins Randy Moss as one of the only two players to record 3,500 receiving yards before the age of 24.

It is no wonder that Hopkins was selected to play in the 2016 Pro Bowl. Although, the young receiver would rather make his final appearance in the 2016 Super Bowl.

A win over Kansas City next week would be the next task at hand for Hopkins and the gang. After nearly flat-lining at the beginning of the season with a 1-5 record, the Chiefs did the unbelievable and scoured up 10 wins in a row to launch themselves into the postseason.

The only thing sweeter would have been for the Denver Broncos to lose in Week 17 so that the Chiefs could win the division. Though, that didn’t happen. If the Chiefs, who haven’t been in a playoff game since 2013, can make it all the way, they will play in their first Super Bowl since 1969.

It wasn’t a pretty performance for Denver Broncos quarterback Peyton Manning back in November, but the future Hall of Famer did just enough to break another one of Brett Favre’s NFL records in Week 10.

When Manning connected with running back Ronnie Hillman for a short pass, it took his all-time passing yard total to 71,840, which surpassed Favre’s 71,838 on the record book.

Brett Favre congratulated Peyton Manning on his passing record… from a tree stand.

Manning later departed the game, and it was revealed he had been playing with a serious foot injury that hampered his performance.

But thanks to a little last-minute regular season action in Week 17, Manning now stands with 71,940 total passing yards. The next active NFL quarterbacks behind Manning in passing yards are Drew Brees (60,903) and Tom Brady (58,028).

Both Brees and Brady would likely have to play another few seasons to catch up, providing Manning retires after this year.

2015 marks an NFL record for most touchdown passes thrown

In 2014 there were 807 passing touchdowns thrown, which was a record.

Entering Week 17 of the 2015 season, there were already 795 passing touchdowns on the books. Sunday’s action added 47 additional touchdowns to that number, setting a new record-high of 842. Brees, who was responsible for 32 passing touchdowns, also deserves a shout-out for passing for the most yards (4,870) for the sixth time in his NFL career.

On a down note, the fewest passing touchdowns made by a quarterback who started all season was accomplished by Teddy Bridgewater, who had only 14 for the year. That’s pretty putrid.

Also worth noting is the only non-quarterback players to pass for a touchdowns in 2015 were Houston Texans wide receiver Cecil Shorts and Tennessee Titans running back Antonio Andrews.

With 2015 being quite a spectacular year for wide receivers versus running backs, it shall be interesting to see if the passing touchdown record can once again be broken in 2016.