20 underrated NFL playmakers who will feast in 2018

It is an exciting time in the NFL as voluntary practices are taking place around the league. This reunites seasoned veterans, superstars, and some underrated players all on the same field.

Right now, we are going to focus on some underrated players to keep an eye on as summer practices pave the way to the 2018 NFL season. This is the under-the-radar crowd — players who might just surprise with a spectacular year.

Every season in the NFL we see a few diamonds in the rough turn into rock stars. The follow group consists of some underrated playmakers who possess what it takes to feast in 2018.

Burton had not made much of a name for himself during his four years playing with the Philadelphia Eagles, until Super Bowl 52 that is. That game put the spotlight on Burton when he pulled off a trick-play touchdown pass to quarterback Nick Foles. He enters 2018 as the No. 1 tight end for the Bears, and we could see him become quarterback Mitch Trubisky’s new best friend. Burton is going to be a key player for head coach Matt Nagy, who formerly served as offensive coordinator to a brand-name tight end, Travis Kelce. The ceiling for Burton is high.

When talking about which running backs are going to have monster 2018 seasons, Collins’ name is not exactly among the first mentioned. But, big numbers should be in store for Collins, as the Baltimore starting job is his to lose. Last year, Collins averaged a healthy 4.6 yards per carry, racking up 973 rushing yards and six touchdowns. He also managed 23 receptions. Still young, at only 23 years old, Collins should keep the feast going in 2018.

The Steelers were smart to add help behind Antonio Brown and JuJu Smith-Schuster when they selected Washington out of Oklahoma State in the second round. Washington had a highly productive college run, including leading the NCAA with 1,549 receiving yards last year. He also scored 14 total touchdowns. Now that Martavis Bryant is no longer a part of Pittsburgh’s offense, Washington will likely take over that role with second-year receiver JuJu Smith-Schuster playing opposite of Brown. A breakout year similar to what we saw from Smith-Schuster as a rookie is not out of the question. 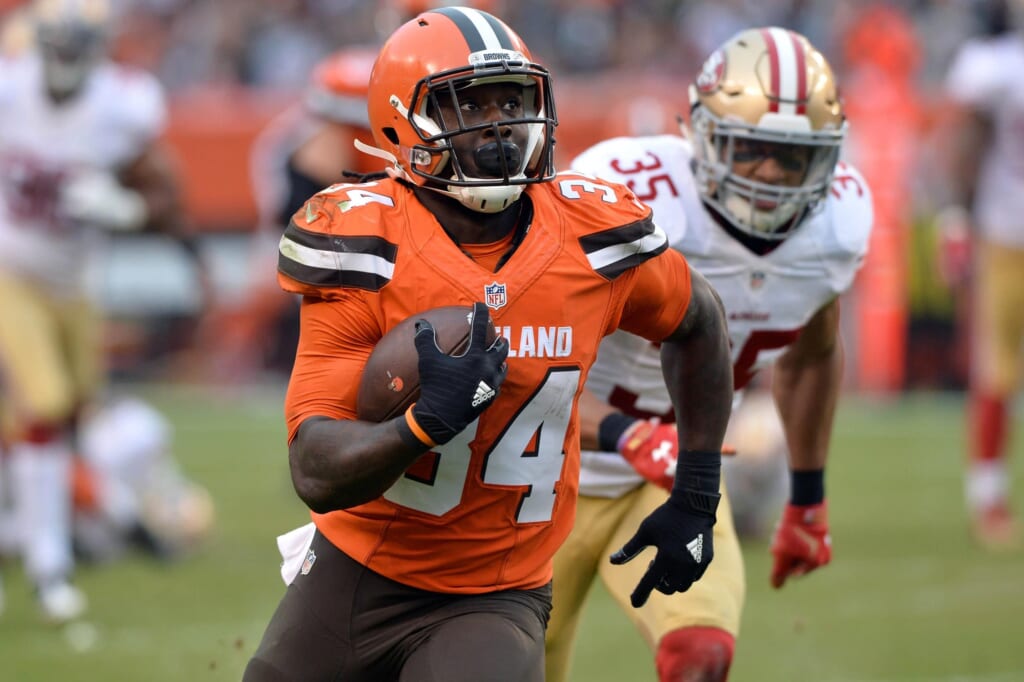 Crowell will look to become more of a standout back than he was with the Cleveland Browns. He should receive plenty of early-down carries, especially with the Jets’ passing game not always being on point. If he can gain the edge over Bilal Powell, who is four years his senior, Crowell might just eclipse the 1,000-yard rushing mark for the first time in his career. We would also like to believe Crowell will score more touchdowns than the two he managed last year.

Somebody not named Larry Fitzgerald needs to step up and start catching more balls in Arizona. With John Brown and Jaron Brown out of town, Williams should compete for a larger role. After nabbing only three catches for 31 yards last year, Williams has since worked out this offseason with former NFL receiver Chad Johnson to improve his mindset. It will be worth watching how Williams responds to new quarterbacks Sam Bradford and Josh Rosen in training camp.

The Broncos did out with the old (C.J. Anderson) and in with the new at the running back position, selecting Freeman in this year’s draft. Freeman sits behind third-year back Devontae Booker in depth. But he is already being referred to as the “Bellcow type” of running back by general manager, John Elway. With Booker never really busting out the way many expected, Freeman should steal the show. He rushed for 1,475 yards and 16 touchdowns his final year at Oregon.

Goodwin was not seen as a huge playmaker when he spent his first four seasons with the Buffalo Bills. He recorded only 780 total yards and six touchdowns in Buffalo. But, he made a bigger splash last season with the 49ers, falling only 38 yards shy of hitting the 1,000-yard mark. Even with Pierre Garcon returning, Goodwin stands to thrive working a full season with quarterback Jimmy Garoppolo. Goodwin was targeted 49 times once Garoppolo took over under center in Week 12, averaging nearly 10 opportunities to shine per contest.

Watson is not exactly the first tight end to fall off the board in fantasy football drafts. But, if the veteran can stay healthy he is on course to have another thriving season playing with the Saints. Watson put up the highest yards of his career (825) during 2015 catching passes from quarterback Drew Brees. He was targeted 110 times and scored six touchdowns that season. If this duo can rediscover their chemistry, Watson’s 14th year in the league will be one to remember.

We have only witnessed a small sample size from Allison over his two years in Green Bay. Between 2016-17, Allison recorded a mere 35 catches for 455 yards and two touchdowns. But, the 24-year-old receiver should see an uptick in targets without veteran Jordy Nelson on the roster. He is the No. 3 option outside of Davante Adams and Randall Cobb, with the latter taking some steps back the past two seasons. If Allison has a productive training camp, it will be an indicator of bigger things to come.

Latimer landed in a perfect spot in New York after spending four years playing with the Denver Broncos. His last season was his most productive, as he recorded 287 yards and two touchdowns filling in for the injured Emmanuel Sanders. This was enough production for the Giants to sign Latimer, and he is currently listed as the starter opposite Odell Beckham Jr. With OBJ, as well as slot specialist Sterling Shepard and tight end Evan Engram drawing plenty of coverage, Latimer will reap some benefits. 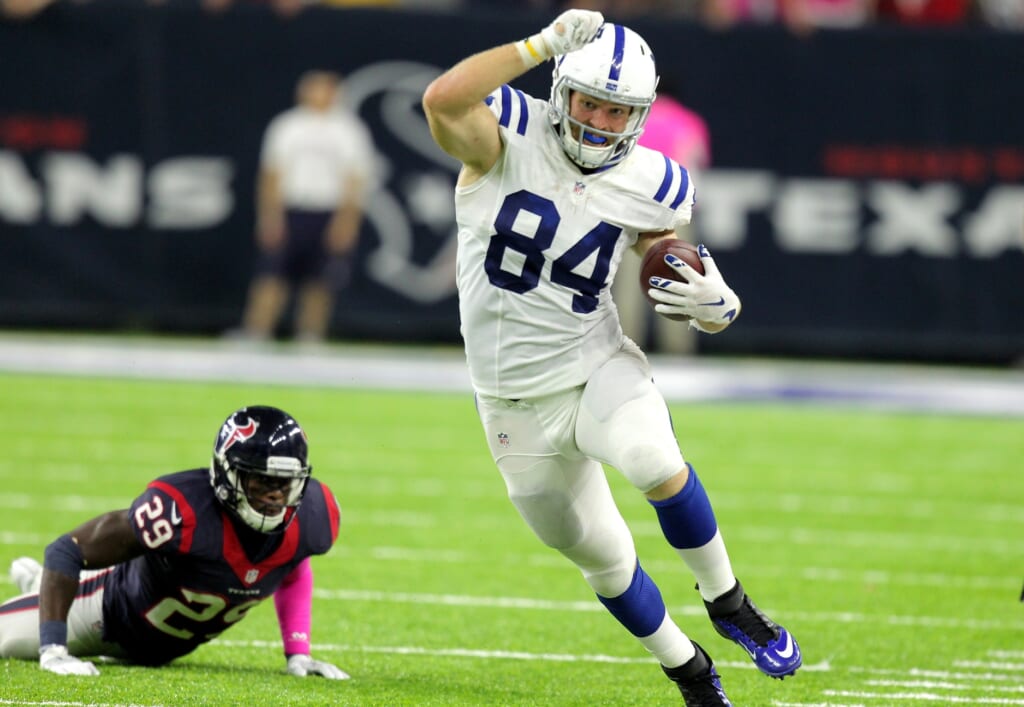 The player most people focus on in the Colts’ offense is wide receiver T.Y. Hilton. But Doyle should not be undervalued. He caught 80 balls for 690 yards and four touchdowns in 2017 — sneaky good production. Provided quarterback Andrew Luck returns, Doyle’s numbers should be on the rise. Luck has always kept his tight ends heavily involved in the passing game. If for some reason we see Jacoby Brissett under center, Doyle’s stock should still hold steady, and could even increase given Brissett’s familiarity in his second year with the club.

With fellow receiver Jamison Crowder regressing last year and scoring only three times, Doctson is primed for a breakout. He recorded just 502 yards in 2017, but scored six touchdowns. Big plays are Doctson’s forte, and he has averaged 15.4 yards per catch during his first two seasons as a pro. Five inches taller than Crowder, Doctson is a big, tall option for quarterback Alex Smith to target downfield.

It is expected that Taylor’s teammate, last year’s No. 5 overall pick Corey Davis, will rebound after a poor season in 2017. But Taylor (selected in the third round last year) has our interest piqued. He averaged 14.4 yards per reception, compared to Davis’ 11 yards per catch. Taylor’s talent for making huge plays should help quarterback Marcus Mariota’s passing game improve. Taylor is listed as a starter in the slot taking over Eric Decker’s vacated position from last year.

The Texans hope their second-year running back will be ready for training camp after tearing his Achilles last season. Provided he returns healthy this year, it could be the time for Foreman to edge ahead of veteran Lamar Miller. Miller just rushed for the lowest yards per carry (3.7) since his 2012 rookie season, scoring only three rushing touchdowns along the way. Foreman averaged 4.2 yards per attempt, and he is only two seasons removed from 2,028 rushing yards during his last season playing for Texas in 2016.

If quarterback Ryan Tannehill stays on target to suit up in 2018, he will have a ridiculously talented, 6-foot-6 rookie tight end in Gesicki to target. A handy stat compiled by Pro Football Focus shows that Tannehill sports the second-best red-zone passer rating on record for his 2016 season. Red-zone catches and tall tight ends go well together, which should lead to Gesicki stealing some action from the Dolphins’ wideouts. Perhaps the league has its next version of Rob Gronkowski in the making. 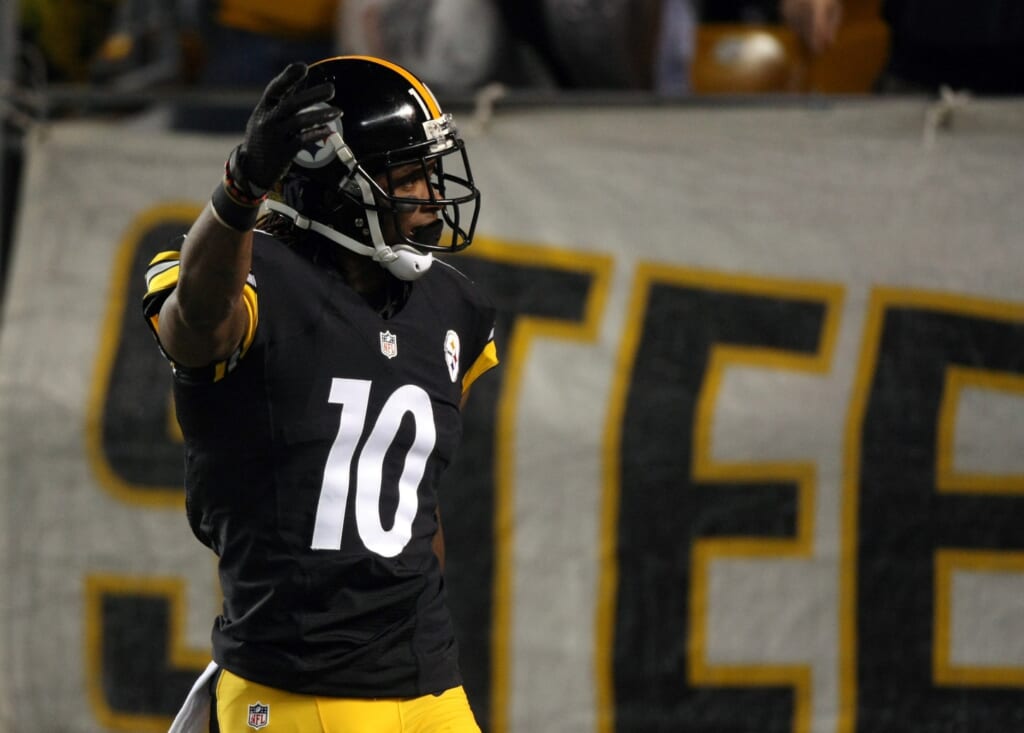 After finally getting the divorce he was seeking from the Steelers, Bryant will get a fresh start across the country. The Raiders have Bryant listed as their No. 3 receiver right now. All it would take is for either Jordy Nelson and/or Amari Cooper — both coming off of terrible 2017 campaigns — to backslide for Bryant to garner even more targets. Bryant proved to be huge playmaker when he was on the field for the Steelers, averaging 15.2 yards per catch in Pittsburgh.

Hines is currently behind second-year running back Marlon Mack in depth, but that should not impact his touches much. According to head coach Frank Reich, Hines will line up at running back and at times as a slot receiver. He might even outperform Mack in training camp. If his cards are all played correctly, Hines should rack up tons of touches, resulting in plenty of yards. Hopefully, the touchdowns pile up as well. He has game-breaking speed, and if the Colts can figure out how to use him he’ll go off.

The Jaguars have remodeled their wide receiver room after letting both Allen Robinson and Allen Hurns walk. Chark was drafted in the second round to add depth behind Marqise Lee and Donte Moncrief, who was acquired in free agency. It’s worth noting that, between Lee and Moncrief, they have tallied only 26 combined touchdowns since their rookie years in 2014. Perhaps Chark winds up shining even brighter than this middling duo in 2018.

While all eyes will be on franchise passer Jimmy Garoppolo, the talents of Kittle should not go unnoticed. In his 2017 rookie season, Kittle drew 63 targets resulting in 515 yards and two touchdowns. He caught 68.3 percent of everything thrown his way. We would like to believe solidity at the quarterback position will help Kittle build on his numbers and produce a smashing sophomore campaign.

Williams made some ferocious plays last year, and we would love to see more of the same in 2018. He enters the coming season having averaged 16.9 yards per catch, while piling up 728 yards and four touchdowns in 2017. But at the end of the day, the only Chargers wideout anyone talks about is Keenan Allen. With question marks at the tight end position after losing Hunter Henry to a torn ACL, somebody will be on course to inherit additional targets. It may just by Williams, who is 6-foot-4 and lightening fast, that quarterback Philip Rivers counts on the most.