20 most intimidating CFB defenders in 2018

When the ball is spotted and ready to be snapped, there’s no time for offensive players to be scared. But that doesn’t mean they aren’t a bit wide-eyed and anxious as one of college football’s most intimidating defenders is staring them down.

While each of the 20 players we’ve highlighted are considered top talents, not all of the nation’s premier defenders are mentioned. Their skill sets or responsibilities simply aren’t as imposing when compared to others; that doesn’t mean they’re not excellent players.

After taking a redshirt in 2016, Andraez “Greedy” Williams lived up to his nickname as a freshman. He swiped an SEC-best six interceptions. Stunningly, no other LSU player picked off more than one pass. At 6-foot-2, Williams has terrific size for a cornerback. Plus, he allowed only 20 completions in 59 targets, per CFB Film Room. Between that build and production, he’s a miserable sight for a quarterback when trying to connect with a receiver in Williams’ area.

Terrell Lewis would also be a sensible choice heading into a healthy season, but Anfernee Jennings is more of an established player. And the 6-foot-3, 262-pounder is a nightmare to contain. He recorded 41 tackles, six stops for loss, four hurries and two forced fumbles last season while showing off a bit of versatility. He lined up as both an edge-rusher and inside linebacker — and produced at both spots. Offenses always need to keep a close eye on Jennings’ positioning. 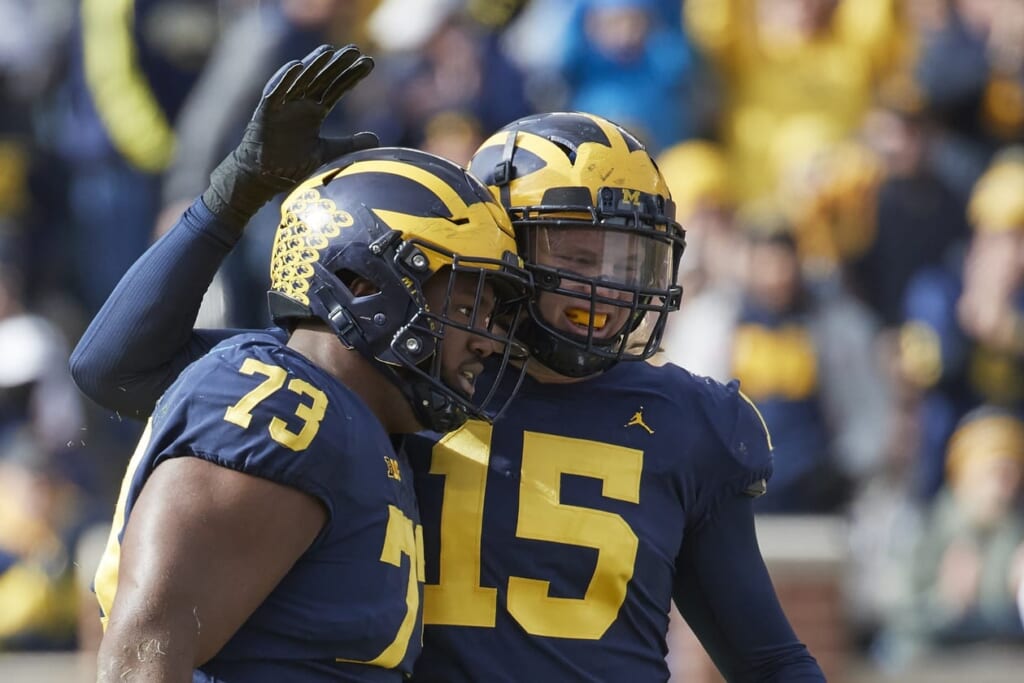 Maybe it’s the long hair. Or, maybe Chase Winovich is just that good. The senior defensive end hasn’t garnered praise like his teammate Rashan Gary, yet Winovich has been one of Michigan’s top pass-rushers for the last two seasons. He ranked second on the Wolverines with 5.5 sacks in 2016 and tied Khaleke Hudson atop the chart at eight sacks last season. The loss of interior star Maurice Hurst will affect Michigan, but Winovich — who has 27.5 career tackles for loss — should continue being a force.

Whether he’s standing up running backs, tracking down ball-carriers near the sideline or blitzing the quarterback, Khalil Hodge is hard to miss. And the middle linebacker is just about impossible to overlook on the stat sheet, since he ranked second in the Football Bowl Subdivision with 154 total tackles last season. Buffalo’s star picked off two passes and forced a couple of fumbles, as well. Hodge may seem unassuming to some, but MAC blockers are keenly aware of his presence.

Jeffery Simmons has a good argument to be highlighted along with Montez Sweat, since both players nabbed first-team All-SEC honors in 2017. Sweat, though, led Mississippi State with 15.5 tackles for loss and 10.5 sacks, adding 16 hurries and 10 hits, per CFB Film Room. The 6-foot-6, 241-pounder is quick off the snap, and that explosiveness draws extra blockers to free Simmons and the other Bulldogs to make a play — if Sweat doesn’t get there first, of course.

Though not a familiar name to most college football fans, Byron Murphy is flat-out dominant. The Washington cornerback only appeared in six games last season, yet he grabbed three interceptions and broke up seven more passes. Murphy also provided three tackles for loss, so he’s more than a lockdown defender. If both he and Jordan Miller can stay healthy, there’s no doubt the Huskies will boast one of the nation’s top cornerback combinations. 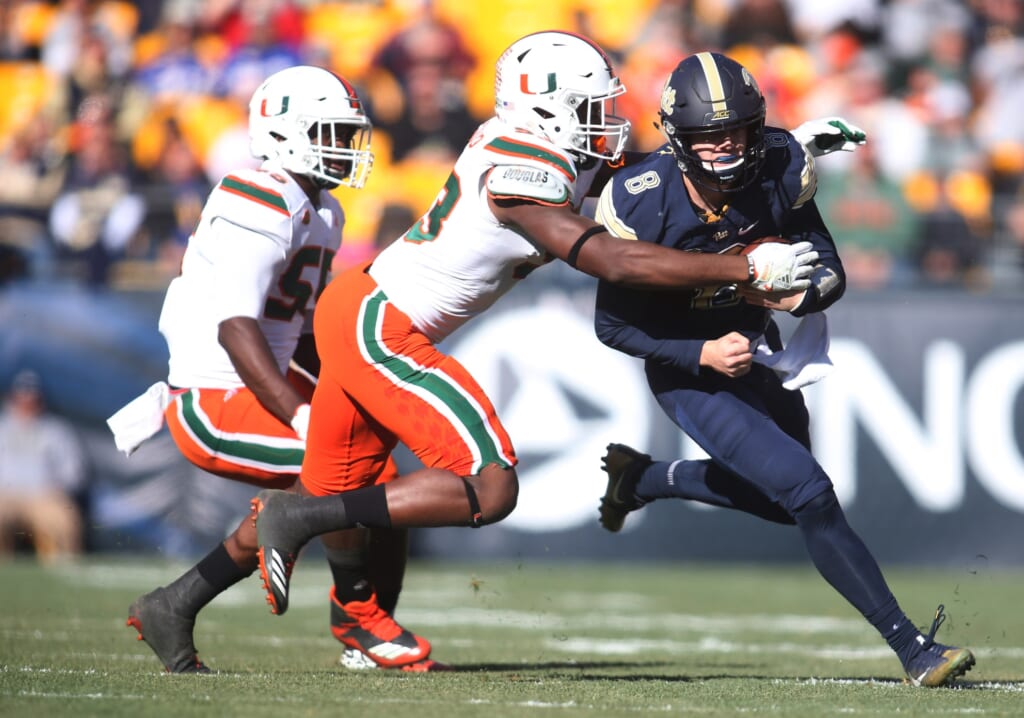 Miami has a legacy of imposing linebackers, and Shaq Quarterman certainly fits the mold. The 6-foot-1, 240-pounder is a two-year starter for the Hurricanes, who rejoined the national conversation thanks to a dominant defense last year. Quarterman finished second on the team with 83 tackles, chipping in seven stops for loss and five pass breakups. Fellow linebacker Michael Pinckney is a rising talent, but Quarterman is the undisputed leader of the unit.

Not only is Raekwon Davis listed at 6-foot-7 and 308 pounds, he makes sure that mammoth frame is put to efficient use. The defensive lineman posted 69 total stops — including 10 behind the line of scrimmage with 8.5 sacks — in 2017, and CFB Film Room tagged him with only two missed tackles on the season. Davis, who secured first-team All-SEC honors, will join the All-American chase in his featured role on Alabama’s vaunted front line.

Georgia is revamping its defense after reaching the national championship, but the program has no concerns about one side of the secondary. Deandre Baker developed into a shutdown corner in 2017, snagging three interceptions and breaking up nine passes. According to CFB Film Room, he allowed a mere nine catches on 34 targets — a success rate of only 26.5 percent. The Bulldogs have plenty of promising young talent, but Baker will be the defender opponents respect most. 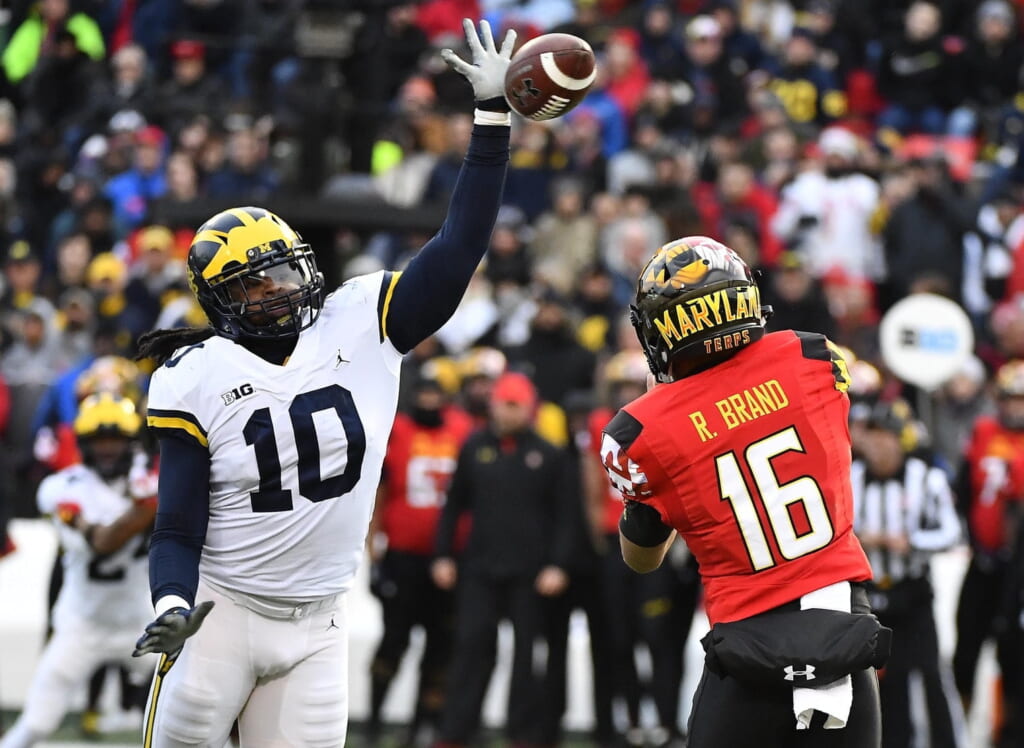 Michigan had high expectations for Devin Bush Jr. in his first season as a starter, and the hard-hitting linebacker only exceeded them. En route to earning third-team AP All-America recognition, he gathered a team-high 102 tackles with 9.5 for loss and five sacks. Additionally, he broke up eight passes. Bush could be considered stocky at 5-foot-11 and 222 pounds, yet the combination of elite speed and outstanding instincts makes him a classic, feared Big Ten linebacker.

Clemson’s fourth-best defensive lineman, Austin Bryant, is a potential first-round pick. Have fun stopping that, ACC programs! During his first season as a starter, the junior piled up 50 tackles with 15.5 behind the line of scrimmage and 8.5 sacks. Bryant, like two of his teammates, passed up the NFL and elected to return for one final season. He doesn’t deserve to be an afterthought, and another year of development should help Bryant become a household name prior to the 2019 NFL draft.

The obvious pun is “Mack is built like a truck.” Easy joke aside, the 6-foot-2, 237-pounder is a physically impressive linebacker who’s ready for a full-time role. Alabama is reloading on defense, and Wilson will be a starter in the middle. As a sophomore, he collected 40 tackles and four interceptions — including the game-sealing pick-six against Clemson in the College Football Playoff. He should be among the team leaders in tackles, and several ball-carriers will remember the time Wilson trucked them.

Need an end? Rashan Gary has you covered. Want a tackle? He can slide inside. That versatility will be especially valuable as Michigan works to replace Hurst in the middle of the defensive line. Gary, an athletic specimen in a 6-foot-5, 281-pound frame, accumulated 66 tackles with 12 behind the line of scrimmage and six sacks last year. He added eight official hurries, though CFB Film Room credits Gary with 15. If the season goes as expected, he could be a top-10 NFL draft pick. 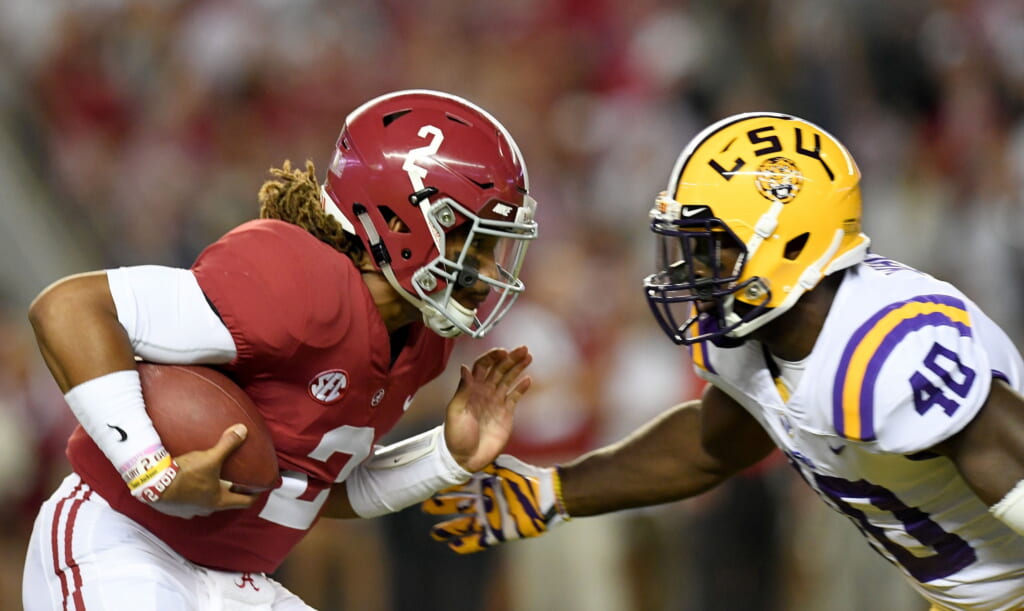 As a freshman, Devin White managed 30 stops and provided reason for future excitement. But doubling up his teammates in tackles last season? That’s simply absurd. Nevertheless, White accomplished exactly that with 133 takedowns compared to 66 by No. 2 tackler Christian LaCouture. White’s unique blend of recognition and explosiveness led to 14 stops for loss and five hurries, too. There isn’t a higher-caliber middle linebacker in college football entering the 2018 campaign.

Typically, a second-team AP All-American listed at 6-foot-0 and 225 pounds is a corner or safety. Sutton Smith, on the other hand, is a converted defensive end who arrived at Northern Illinois as a running back. He’s most certainly not a physically imposing figure, but Smith paced the FBS with 29.5 tackles for loss and 14 sacks in 2017. No matter how small a player is, if he keeps whipping the blocking unit, he’s terrifying. And Smith made a habit of wrecking offensive lines last year.

After a year spent rotating at defensive end and making 13 tackles for loss in 2016, Christian Wilkins shifted back inside during the 2017 campaign. Tackles usually don’t put up flashy numbers, yet Wilkins’ production was solid. He collected 60 tackles with 8.5 behind the line of scrimmage and 4.5 sacks. In addition to four pass breakups — an underappreciated but important trait for linemen — Wilkins had 11 hurries, per CFB Film Room. ACC teams are surely tired of seeing him up front.

Wilkins is largely feared because of production. Dexter Lawrence is similarly impactful, but he also has 40 pounds on his All-American teammate. The rising junior is listed at 6-foot-4 and 340 pounds, and that frame overwhelms the interior of many offensive lines. In two seasons, Lawrence has gathered a total of 96 tackles with 13 for loss and nine sacks. Given the amount of double-teams he faces, the level of respect opposing coaches have for Lawrence is readily apparent. 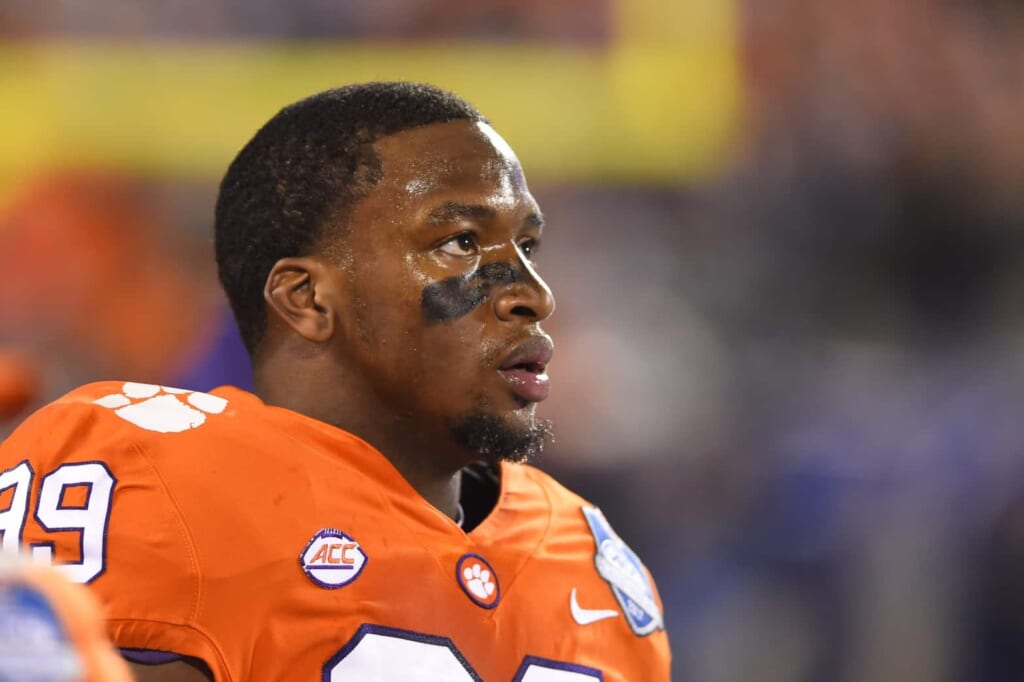 Completing the ultra-talented Clemson defensive line is Clelin Ferrell, a 6-foot-5, 260-pound edge-rusher. As a redshirt freshman in 2016, he posted 12.5 tackles for loss. Ferrell lifted that number to 18 last year, tallying 9.5 sacks and forcing two fumbles. According to CFB Film Room, he also notched 19 hurries and contributed nine hits on the quarterback. Ferrell’s burst is difficult to contain, and his presence as a run-stopper only bolsters the intimidation factor.

A simple overview of Nick Bosa’s numbers explains why he’s as highly regarded a prospect as his brother Joey was. In 2017, the younger Bosa had 16 tackles for loss and 8.5 sacks. Additionally, per CFB Film Room, he racked up 25 hurries and 15 hits. That mixture of disruption and production is unquestionably elite. And at 6-foot-4 and 270 pounds, he’s not a surprising star on the defensive line. Bosa is physically gifted, technically sound and statistically impressive.

The departure of Tom Herman removed much of the spotlight from Houston, but Ed Oliver continued excelling. Now through two seasons with the Cougars, the 6-foot-3, 290-pound defensive tackle has 139 total takedowns with 39 for loss and 10.5 sacks. Oliver has also provided 14 official hurries, broken up 12 passes and forced five fumbles. No matter if he’s pursuing the quarterback or stopping the run, Oliver finds a way to affect the play. And, clearly, offenses are still searching for a plan to stop him.