By Jesse Reed
Atlanta Falcons quarterback Michael Vick holds his leg after being injured in the first quarter against the Baltimore Ravens, Saturday, Aug. 16, 2003, in Atlanta. Vick was taken from the field on a golf cart. (AP Photo/John Amis)

Injuries are part of NFL football—everybody knows this. However, they are particularly devastating during preseason games, especially when the players getting hurt end up losing the season—or worse.

The first night of preseason action in 2015 brought with it more than a few injuries, some of which looked pretty bad. Brandon Browner of the New Orleans Saints and Niles Paul of Washington were both carted off during their games, and Paul’s injury in particular looked pretty gnarly.

This got us thinking about the past. Many a career has been forever altered during these scrimmages and during training camps—some to devastating effect.

With this in mind, the following men suffered the worst preseason injuries in NFL history, in the order they occurred.

The first injury on this list is also the most devastating. Johnson fractured his neck during a preseason game against the Houston Oilers. He went to the hospital un-responsive, where it was determined he was paralyzed from the neck down. Tragically, Johnson passed away eight days later. He had been brought in to return kickoffs after showing off his sprinter’s speed in the 1960 Olympics.

One can only wonder if his life may have been saved in this day and age of modern medicine.

The NFL changed the way it measured first downs after Smith crashed into a metal pole on the sidelines during a preseason game. A cornerstone defender for the Colts before his injury, Smith helped the franchise win Super Bowl V. He never did return to his dominant form, finishing his NFL career with a whimper. However, Smith rebounded nicely with a successful career as a Hollywood actor.

Stingley’s NFL career was ended in a flash during a preseason game in 1978 against the Oakland Raiders. Jack Tatum—the legendary defensive back known as “The Assassin”—and Stingley collided on a play in which Stingley’s helmet crashed into Tatum’s shoulder pad. The big hit resulted in two broken vertebrae, thus ending his career and causing him to spend the rest of his life as a quadriplegic. 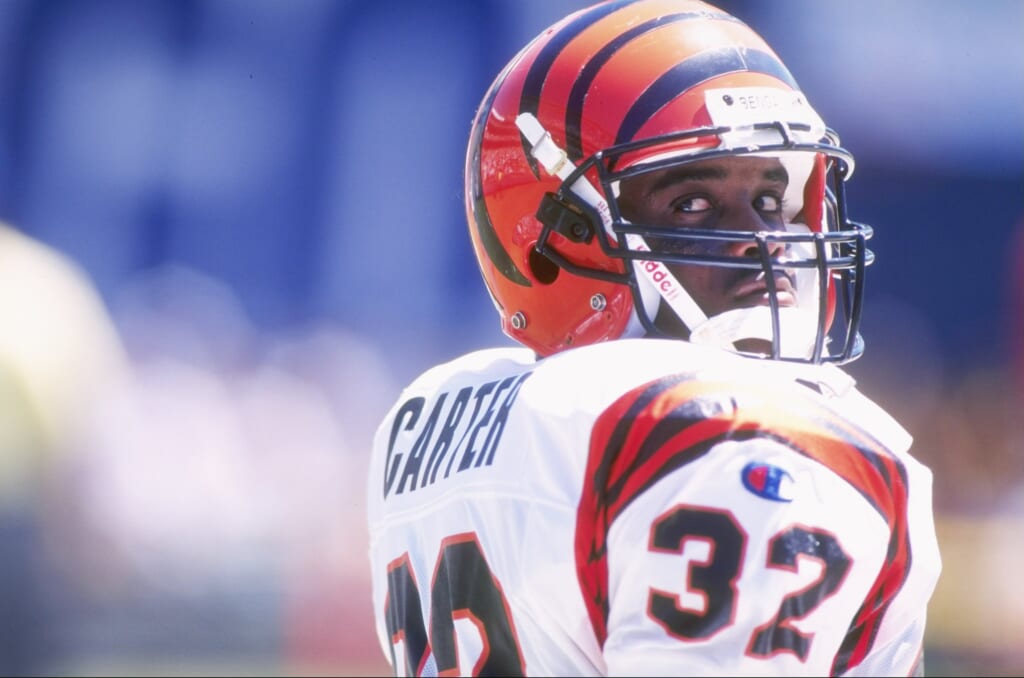 Though Carter has long lived with the “bust” label, he really doesn’t deserve it. Drafted No. 1 overall in 1995, he was injured without contact on the third carry in his rookie season. He tore his ACL in an age when this injury often sunk careers, but he did recover. Carter attempted to return to the form that earned him a record rookie contract, but he was never the same, finishing his career with just 1,144 rushing yards on 319 carries.

Just when Sehorn’s career was starting to take off, it took a nose dive instead when he tore his MCL and ACL in a game against in-state rival New York Jets. He had combined for 11 interceptions in his two previous seasons and was widely recognized as an up-and-coming star. Following his injury, Sehorn did play five more seasons, but he was never quite the same.

The Rams were devastated when Green went down with a nasty knee injury during the third preseason game in 1999. Green was set to take over as the starter, and suddenly St. Louis was dead in the water when his knee was obliterated by Rodney Harrison. As we all know, however, the Rams did fine without Green that season, winning the Super Bowl with Kurt Warner, who became a legend in the years following. Green rebounded the year after with the Kansas City Chiefs and went on to start 99 more games in his career.

Spielman’s story is a bit of a tear-jerker. He missed half of the 1997 season after undergoing neck surgery and then missed the entire 1998 season while tending to his sick wife, who had cancer. Hoping for a triumphant return in 1999, he suffered another neck injury during the preseason and retired before the regular season began. Thankfully, Spielman has found success after football and can be seen weekly on ESPN covering college football. 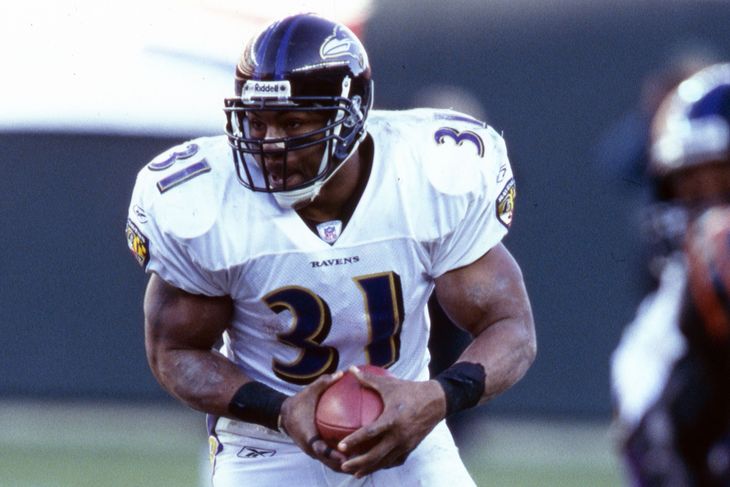 Lewis had the unfortunate luck to have the nation witness his knee injury on HBO’s “Hard Knocks” during training camp following Baltimore’s Super Bowl run in 2000. He missed the entire 2001 season but did come back stronger than ever, rushing for 2,066 yards to lead the league and falling just 39 yards short of Eric Dickerson’s all-time single-season record.

Vick was one of the hottest players in the NFL after breaking into the league with a firestorm sophomore campaign in 2002. He was even on the cover of Madden NFL. Everything changed for him, however, during a preseason game against the Baltimore Ravens when Vick fractured his fibula, causing him to miss the first 11 games of the 2003 season. Injuries plagued him throughout his career, though nobody was more electric than Vick when he was on his game.

Entering the 2006 campaign, Bentley was a two-time Pro Bowler and had just signed with his dream team in Cleveland. Then his career was forever altered when he injured his knee during the first 11-on-11 drills in camp that year for the Browns. It was later revealed that Bentley suffered a staph infection and required four surgeries following the injury, and he said the infection was so bad he nearly had to have his leg amputated. He sued the Browns over the infection but later settled out of court in 2012.

Like Sehorn before him, Umenyiora fell victim to a season-ending injury during a preseason game against the Jets. During his down time in 2008, Umenyiora kept himself busy after taking on a role with Monday Night Football as a contributor, having won fame as a key contributor to New York’s Super Bowl run the year before. The talented pass-rusher rebounded well after returning to the game, registering 43.5 sacks in the years following his injury.

Maclin missed the entire 2013 season after tearing his ACL during training camp. He had a tremendous rebound season last year, however, managing career-highs in catches (85) yards (1,318) and touchdowns (10). His phenomenal recovery allowed him to sign a lucrative five-year contract during free agency with the Chiefs worth $55 million. 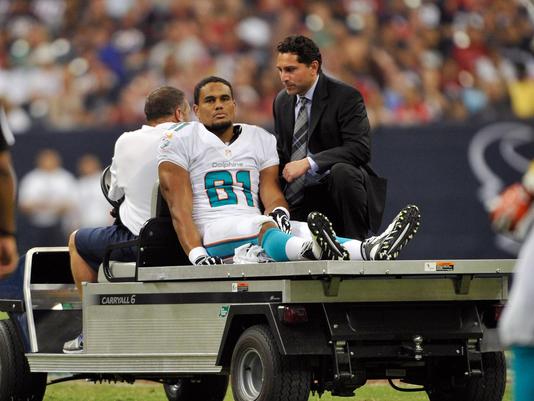 Keller was supposed to be a big part of Miami’s offensive plans in 2013 after he signed a one-year deal worth $4.25 million. Unfortunately, the talented tight end never got a chance to prove his worth with the Dolphins. He endured a horrific injury, tearing his ACL, MCL, PCL and dislocating his knee and missed the entire season. It appears his career may have been cut short as well. Keller still isn’t ready to play football, and perhaps he never will.

As suspected, Paul’s injury was significant on Thursday night when Washington played against the Browns. His ankle was rolled up while he was run-blocking, resulting in an agonizing and season-ending ankle fracture dislocation. He was expected to contribute in a big way to the offense this year as a pass-catching tight end, and this was a huge setback for an up-and-coming star.

Editor’s note: This article originally included Michael Crabtree’s Achilles tendon injury. That has been removed due to the fact that Crabtree injured himself during OTAs. Furthermore, it was noted that he came back to help the San Francisco 49ers reach the Super Bowl during the 2013 season, which was incorrect.