12 unheralded players set to step up in NFL Week 2

The first week of the NFL season gave fans plenty of surprises. While many stars delivered highlight performances, several unheralded players jumped into the spotlight.

It will be no different in Week 2 as a young season provides players with opportunities to shine. Plenty of stars will deliver performances everyone expects, but lesser-known players will emerge and garner national attention for the first time.

Here are 12 unheralded players set to step up in Week 2.

The loss of Greg Olsen for an extended period of time is a massive blow for Carolina’s offense. As the team looks to overcome the loss, fans should get excited about the opportunities coming Thomas’ way.

A fourth-round pick in the 2018 NFL Draft, Thomas quickly drew the praise of Carolina’s coaching staff. While he didn’t produce extremely well in college, the 22-year-old is an example of the athletic pass catchers who can come into the NFL and thrive.

Given the Panthers’ lack of weapons, there’s no reason to believe Thomas shouldn’t see a significant percentage of snaps and plenty of targets right from the jump. The Panthers planned for him to be the future at tight end. He is now present and will be counted on to contribute.

Atlanta could have explored the plethora of safety options in free agency after it lost Keanu Neal for the season. Instead, the Falcons expressed their trust in Kazee by moving him into the lineup.

The second-year safety will draw his first start in Week 2 against the Carolina Panthers. Kazee will provide Atlanta’s defense with a hard-nosed safety who loves to deliver big hits and can create turnovers.

After Neal exited in Week 1, it was Kazee’s hit that popped the ball in the air and allowed linebacker Deion Jones to intercept the pass. The 25-year-old also showed the same ability as a rookie with three forced fumbles in limited snaps. Neal will certainly be missed this season, but Kazee seems ready to step into a larger role for Atlanta.

Tennessee finds itself in the same position as Carolina, turning to a young tight end for a starting role. Delanie Walker is out for the season, opening the door for Smith to step into a major role.

A third-round pick in 2017, Smith played a minor role as a rookie with 18 receptions for 157 yards and two touchdowns. He demonstrated big-play ability and tested extremely well athletically back at the scouting combine.

While every team struggles to stop Rob Gronkowski, the Houston Texans were especially ineffective in coverage. Even if Blaine Gabbert draws the start in Week 2, this could be the start of a breakout season for Smith.

Injuries are a theme for this week’s list and the trend carries into Seattle. Wide receiver Doug Baldwin is sidelined with a torn MCL, which pushes Brown up the depth chart.

A deep threat who averaged 15-plus yards per catch over the past two seasons, Brown should benefit from Wilson’s deep ball. While the Chicago Bears will be able to put pressure on Wilson, Sunday Night Football also showed their inability to prevent big plays.

Brown certainly isn’t the type of player who will be fed with targets, but a few deep shots his way could turn into a strong line and a trip to the end zone. Seattle desperately needs receivers to step up in Baldwin’s absence and Brown has the potential to do just that.

A fourth-round pick in 2018, White quickly ascended up the depth chart and found his way into the starting lineup.

In his first NFL game, White led the team in tackles (six) and played 79 percent of the team’s defensive snaps. After facing an explosive offense in the Kansas City Chiefs, White and the Chargers now draw a matchup against the Buffalo Bills.

A matchup against Buffalo’s woeful offense should provide White with plenty of chances to rack up tackles, drop back in coverage and potentially help shut down LeSean McCoy. On a talented Chargers’ defense, the rookie linebacker could soon start gaining more attention as he steadily improves. 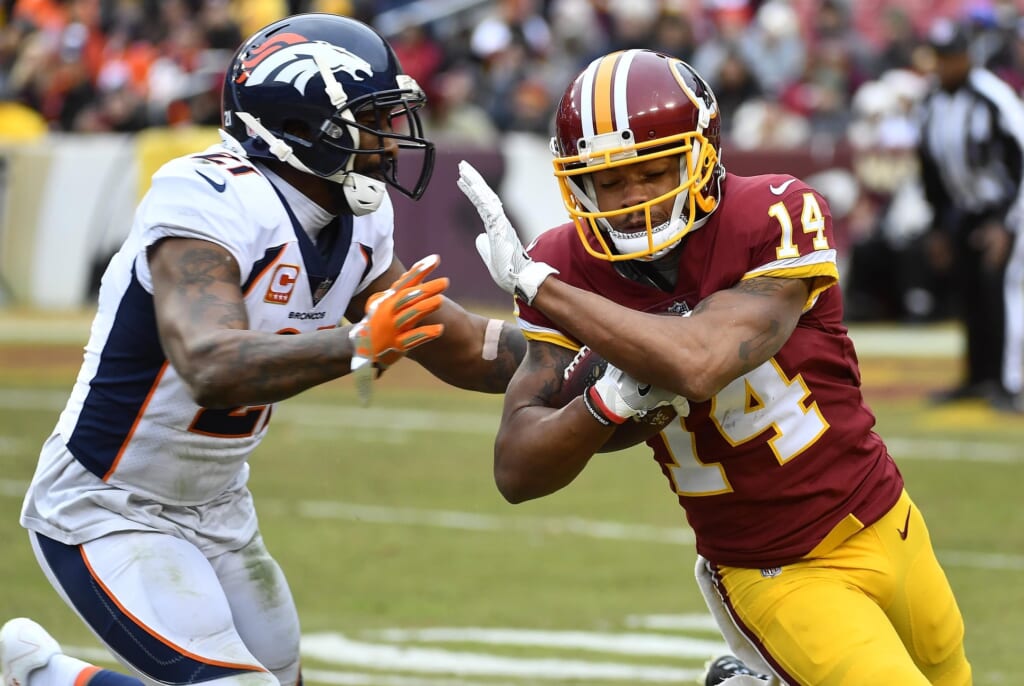 Grant will have a shot at revenge in Week 2 against his former team with a chance to show them why he should have been brought back.

In his first game with the Colts’ offense, Grant quickly became a go-to target for Andrew Luck. The 27-year-old caught eight-of-nine targets for 59 yards, working the short field and allowing Luck to get the ball out quickly.

Indianapolis will certainly look to employ the same strategy against Washington, especially in a game where it may trail early. While Grant may not rack up a lot of yards this year, his role in this offense easily puts him on track for the best season in his career

Chicago demonstrated its ability to put pressure on the opposing quarterback with ease against the Green Bay Packers. Now the Bears will face the Seattle Seahawks, who have arguably the worst offensive line in football.

Seattle will already have problems with Khalil Mack and Akiem Hicks, who both dominated in their Week 1 performances. As the Seahawks try and shift extra attention to both, it will open the door for Floyd to create havoc.

Chicago possesses far too many rushers for the Seahawks to handle and when they choose who to block, it will naturally leave guys like Floyd with easy matchups to exploit. After a quiet 2018 debut, expect Floyd to rack up his first sack of the season in Week 2.

Even if Marquise Goodwin returns in Week 2, Pettis’ Week 1 performance demonstrated why he will have an important role in San Francisco’s offense going forward.

Jimmy Garoppolo targeted the rookie receive five times against a stout Minnesota Vikings secondary. While Pettis hauled in just two of the five targets, he turned them into 61 yards and the first touchdown of his career.

Goodwin will at best be limited on Sunday, which will allow Pettis to see significantly more snaps and targets versus the Detroit Lions. Given Pierre Garcon is expected to be matched up with cornerback Darius Slay, it should leave Pettis free to torch Detroit’s far inferior cornerbacks.

In a defense with so many stars, it’s easy for Littleton to go unnoticed. Yet the 24-year-old linebacker could be one of the team’s most important players this season.

Los Angeles is loaded along the defensive line and secondary, but the question this season comes down to linebacker. While Littleton had some moments to learn from in Monday’s win, he also played well overall.

Littleton should see plenty of chances to rack up tackles and record a few turnovers in this defense. He’s learning from one of the best defensive coordinators in football and with all the talent around him, success should come quickly for the former undrafted linebacker.

On a revamped defensive line, it was Wise Jr. who became the disruptor for New England’s opener against the Houston Texans.

The 24-year-old added an arsenal of new pass-rush moves in the offseason and it quickly paid off for him with 1.5 sacks in Week 1. Now Wise will match up against the Jacksonville Jaguars, who should provide some tougher competition than he faced against Houston.

Even with the more difficult matchup, Wise’s development at a young age in a great defensive system puts him in position for continued success. Plenty of pass rushers experience a major jump in their second season and Wise is the next to join them. 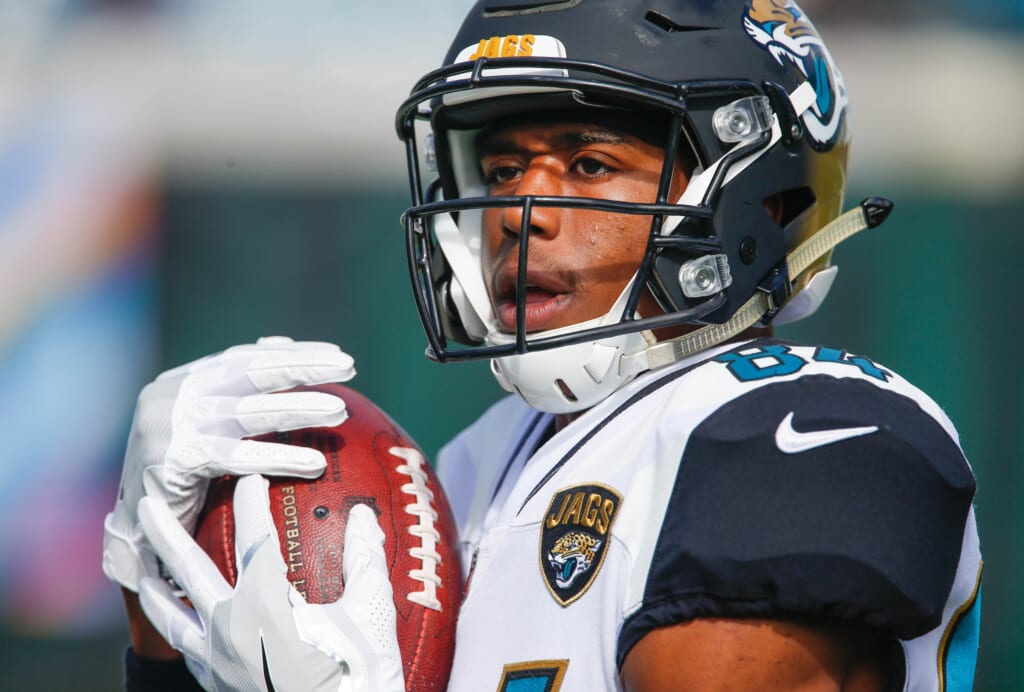 There is no story better in the NFL than the undrafted free agent who goes from an unknown in training camp to a starter.

That was Cole’s story in 2017. He caught 42 passes for 748 receiving yards as an undrafted rookie receiver. Now in his second season, he has emerged as Jacksonville’s top wide receiver. Really, the only thing holding him back from greater production is inconsistent quarterback play.

Cole has the chance on Sunday to help push Jacksonville to an upset win over the New England Patriots. Jacksonville’s defense will get most of the credit, but Cole is fully capable of delivering the big play the Jaguars need to pick up the win.

While Young may not see much of Green working as Baltimore’s slot corner, he’ll find ways to impact the game in different ways.

Baltimore used the 24-year-old on the blitz against the Buffalo Bills and he became the first Ravens’ cornerback in over 10 years to record two-plus sacks in a game. He can also drop back into coverage and shows the athleticism and instincts to turn an easy catch into a deflected pass.

Young is a multi-dimensional chess piece for Baltimore’s defense and they’ll look to use him in a number of ways in a short week. This is a defensive player on the rise in the NFL and he further strengthens an excellent secondary.